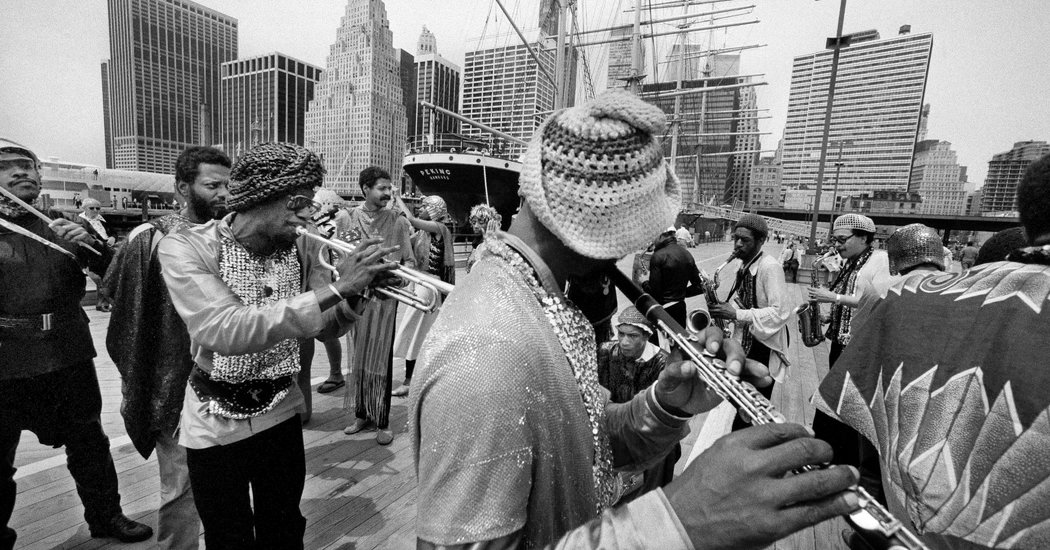 In the late 1960s, as black Americans fought for equal rights, music started to reflect their calls to action. Nina Simone wondered what real freedom felt like, and James Brown encouraged black people to proudly proclaim their race. While black music has always been a refuge, these songs expressed a new way of thinking, combating racism with unflinching pride.

Jazz musicians including Ornette Coleman, Sun Ra and John Coltrane also sought transcendence with their art, and through shrieking horns and deconstructed rhythms, they set forth a new wave of energy music. It was called free jazz, a loose, improvised blend less tied to structure, and its creation has been credited to Coleman, who started playing these frenetic arrangements on a white plastic saxophone in 1959. The music, and its focus, evolved over the next decade: Sun Ra believed that black people would never find peace on Earth and should live on other planets. Coltrane, through his saxophone, blew shrill notes to summon higher powers.

Some jazz purists weren’t thrilled with this “new thing.” Still, the music persisted. Through Alice Coltrane, Pharoah Sanders, Archie Shepp and others, free jazz started tapping into black consciousness, and songs like “Journey in Satchidananda” and “The Creator Has a Master Plan” helped listeners escape the despair of everyday life.

In 2015, when America was in peril once again — unarmed black people were being killed by the police at an alarming rate, and the country’s ideological divides grew wider in the run-up to the presidential election — the music responded in kind. In December 2014, the R&B singer D’Angelo released “Black Messiah,” his most political album to date, and the following March, Kendrick Lamar put out “To Pimp a Butterfly,” an avant-rap album that embraced free jazz. Two months later, the saxophonist Kamasi Washington, a major contributor on “Butterfly,” released his own bold statement — a three-hour jazz album called “The Epic” — which, through its collection of big band, funk, spiritual music, gospel fusion and R&B, was meant to heal a new generation of black people fighting against overt oppression. Suddenly, jazz was cool again, and acts like Shabaka & the Ancestors and Irreversible Entanglements continue pushing forward.

To understand where black liberation jazz may head next, it’s helpful to listen to where it’s been. Here are 15 essential songs from the late 1960s and ’70s when the subgenre was just being established — a list that highlights tracks that were considered underground.

The title track of the guitarist Sonny Sharrock’s debut album was meant to convey the paralyzing stress felt by black women every day in this country. For much of the song, Sharrock’s wife — the experimental vocalist Linda Sharrock — emits primal screams, as the intensity of Sonny’s rapid guitar chords grows more riotous. The track might be jarring, but it effectively captures the pain of being treated as subhuman.

“Malcolm X” is a standout from the tenor saxophonist Hal Singer’s album “Blues and News,” which was released only in France. Singer is from Tulsa, Okla., and was 2 when the Tulsa massacre took place in his Greenwood community. “Malcolm X” pays homage to the civil rights leader through stacked drums, staggered piano chords and Singer’s billowing saxophone solo in a meditative mix of jazz and soul — a rightful nod to the historical figure.

Long before James Mtume was known for the hit song “Juicy Fruit” in 1983, he led a jazz ensemble in the early ’70s and released “Alkebu-Lan: Land of the Blacks” on Strata-East Records. The album, Mr. Mtume declared on the opening “Invocation,” was a “humble offering to the unity of the entire black nation.” The bandleader also denounced the term “jazz” — rather, he said, the album was black music, pure and unfiltered.

The concluding track of Sanders’s “Izipho Zam (My Gifts)” is a sprawling 28-minute collage of West African percussion, meditative chants and Mr. Sanders’s screeching saxophone. Around the 15-minute mark, the arrangement settles into a hypnotic drum break that still sounds incredibly fresh and modern, 47 years after its release.

Roy Brooks and the Artistic Truth, ‘The Last Prophet’ (1973)

Recorded live at Small’s Paradise nightclub in Harlem, Roy Brooks’s “Ethnic Expressions” is a capital-B Black record, from its red, black and green cover art to the deep threads of soul and funk captured on the LP. When Brooks was a bandleader, his music always took on an Afrocentric slant. Before this album, he released a project called “The Free Slave” in 1970. Four years later, he put out another live set, “Black Survival: The Sahel Concert at Town Hall.” Each album was constructed to highlight the profound beauty of blackness, where his people didn’t have to be extraordinary, they could just be.

Sun Ra’s music also centered on the beauty of blackness, yet the experimental bandleader took it a step further, suggesting that black people, subjected to centuries of torment and discrimination, should just leave the planet altogether. Thus “Space Is the Place,” the place being somewhere in the universe where black people can truly be free. Sun Ra conveyed this through a polyrhythmic jumble of horns, synthesizers, piano chords and drums. There was a method to the chaos. Beneath the cacophony was the vocalist June Tyson, who offered the song’s lasting takeaway: “There’s no limit to the things that you can do.”

It’s easy to think a song titled “Coltrane” would be about John, but the composition feels more like an ode to Alice, the saxophonist’s spiritually centered wife. Composed by Bill Lee (Spike Lee’s father), the arrangement takes cues from Alice’s “Journey in Satchidananda” as a mystical jazz opus with strong transcendental power.

Much of the Ensemble Al-Salaam’s 1974 album, “The Sojourner,” is a high-wire act: gospel-infused jazz meant to ignite the soul. “Malika” starts with a brief drum solo by Andrei Strobert, then bursts into a whirl of scatting (Beatrice Parker), surging electric bass (Leroy Seals), and saxophone (Khaliq Abdul Al Rouf), as if the band members are racing to keep up with one another. Though the track masterfully rouses the spirit, it could also score a car-chase scene.

The spiritual jazz ensemble World’s Experience Orchestra recorded its album “Beginning of a New Birth” in the basement of a Boston church, and its concluding song is a 14-minute suite of meditative chants and choral moans. On the surface, it plays like a gospel song, but it was meant to soothe a nation of black people doing their best to persevere. “The Prayer” was remarkably tranquil, a needed respite from societal strife.

Gil Scott-Heron threw the gauntlet in the early ’70s when, on his most famous song, “The Revolution Will Not Be Televised,” he warned listeners of a pending uprising — at some point in time. There’d be no running from it, he said, “the revolution will be live.” His anthemic “The Liberation Song (Red, Black and Green)” with Brian Jackson also rings true now. “I see the blackness of my people,” sang the vocalist Victor Brown. “You know they’re calling for freedom everywhere.”

It’s a song about awakening and staring down fear, even as the unknown lurks around the corner. “I am not afraid,” a poet repeats with conviction. “I am not afraid.” Brother Ah’s second album was more straightforward than his 1972 debut, “Sound Awareness,” yet its convergence of African folk, traditional jazz and Indian rhythms was still quite ambitious. And while “Transcendental March” was the album’s most accessible song, it was still very much Brother Ah (who died in May): contemplative, otherworldly and enlightening.

In the early ’70s, the bandleader James “Plunky” Branch spent time as an activist, learning more about the struggles of black people worldwide, not just in the United States. His first band, Juju, made avant-garde jazz meant to highlight the brutal inequalities created by apartheid in South Africa. Once he resettled in his hometown of Richmond, Va., Mr. Branch formed a new band — Oneness of Juju — and created a more accessible blend of jazz, Southern R&B and polyrhythmic dance. The meaning didn’t change, but in making the sound more palatable, he brought the spirit of Africa to a brand-new audience.

The pianist Harry Whitaker is best known as a member of Roy Ayers’s band, but in 1976, he formed his own group and released the album “Body, Mind, and Spirit” under the name Black Renaissance. The LP had been hard to find until 2002 when it was reissued by Ubiquity Records, a Costa Mesa-based label specializing in jazz, funk and soul. “Magic Ritual” is the album’s B-side, a buoyant soul-jazz epic that grows more luxuriant as it unfolds. Near its midpoint, the beat settles into a sauntering groove topped by vigorous backing vocals and a scene-setting poem. In its totality, Mr. Whitaker has said, “Body, Mind, and Spirit” was “a record before its time.”

The pianist and conductor Horace Tapscott was a legend in Los Angeles. In 1963, he established the Underground Musicians Association for younger artists. From that group came the Pan Afrikan People’s Arkestra, which played in hospitals, prisons and churches in Los Angeles’s black communities. In 1978, the band cut an album called “The Call,” a four-track, 39-minute suite of spiritual jazz that still holds up today. The title track is the most riveting — a communal, orchestral feat with Tapscott very much in control.

Chicago’s Infinite Spirit Music, a band led by the pianist Soji Ade, recorded the album “Live Without Fear” in one day on May 31, 1979, for an obscure independent label, Ancient Afrika Records. “We drove up into Evanston from Chicago in three cars on a day that smelled good,” Mr. Ade said in 2018 when the album resurfaced on Bandcamp. “To ‘Live Without Fear’ means to live in material reality with faith.” His message is profound on the title track, a boundless mix of spiritual music fully capturing the album’s mission statement.