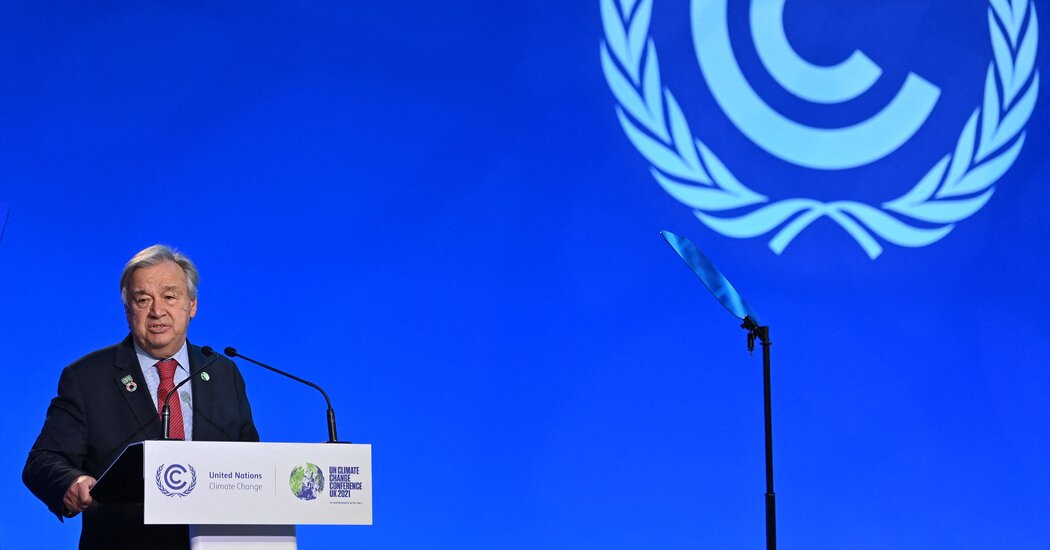 Before it started, the United Nations global climate summit in Glasgow known as COP26 was billed by its chief organizer as the “last, best hope” to save the planet.

Halfway through, optimistic reviews of its progress noted that heads of state and titans of industry showed up in force to start the gathering with splashy new climate promises, a sign that momentum was building in the right direction.

The pessimistic outlook? Gauzy promises mean little without concrete plans to follow through. The Swedish activist Greta Thunberg accused the conference of consisting of a lot of “blah, blah, blah.”

On Saturday, diplomats from nearly 200 countries struck a major agreement aimed at intensifying efforts to fight climate change, by calling on governments to return next year with stronger plans to curb their planet-warming emissions and urging wealthy nations to “at least double” funding by 2025 to protect the most vulnerable nations from the hazards of a hotter planet.

Here’s a look at some key takeaways from the 26th annual United Nations climate change summit.

Time for action is running out

The agreement established a clear consensus that all nations need to do much more, immediately, to prevent a catastrophic rise in global temperatures.

When the conference opened the U.N. Secretary General, António Guterres, said the top priority must be to limit the rise in global temperatures to just 1.5 degrees Celsius, or 2.7 degrees Fahrenheit, above preindustrial levels. That’s the threshold, scientists have warned, beyond which the risk of calamities like deadly heat waves, water shortages and ecosystem collapse grows immensely. (The world has already warmed 1.1 degrees Celsius.)

“The reality is you’ve got two different truths going on,” Helen Mountford, vice president for climate and economics at the World Resources Institute, said last week. “We’ve made much more progress than we ever could’ve imagined a couple years ago. But it’s still nowhere near enough.”

The agreement outlines specific steps the world should take, from slashing global carbon dioxide emissions nearly in half by 2030 to curbing emissions of methane, another potent greenhouse gas. And it sets up new rules to hold countries accountable for the progress they make — or fail to make.

The environment minister of the Maldives, Shauna Aminath, said the latest text lacked the “urgency” that vulnerable countries like hers required. “What looks balanced and pragmatic to other parties will not help the Maldives adapt in time,” she said.

Who needs to cut and how much?

The final agreement leaves unresolved the crucial question of how much and how quickly each nation should cut its emissions over the next decade.

Rich countries, including the United States, Canada, Japan and much of western Europe, account for just 12 percent of the global population today but are responsible for 50 percent of all the planet-warming greenhouse gases released from fossil fuels and industry over the past 170 years.

President Biden and European leaders have insisted that countries like India, Indonesia and South Africa need to accelerate their shift away from coal power and other fossil fuels. But those countries counter that they lack the financial resources to do so, and that rich countries have been stingy with aid.

A decade ago, the world’s wealthiest economies pledged to mobilize $100 billion per year in climate finance for poorer countries by 2020. But they have fallen short by tens of billions of dollars annually. The COP26 agreement still leaves many developing countries without the funds they need to build cleaner energy and cope with increasingly extreme weather disasters.

The call for disaster aid and regulation increases

One of the biggest fights at the summit in Glasgow revolved around whether — and how — the world’s wealthiest nations, which are disproportionately responsible for global warming to date, should compensate poorer nations for the damages caused by rising temperatures.

Calls for this fund, an issue called “loss and damage,” is separate from money to help poorer countries adapt to a changing climate. Loss and damage is a matter of historic responsibility, its proponents say, and would pay for irreparable losses, such as the disappearance of national territory, culture and ecosystems.

The Paris agreement in 2015 urged clearer rules on how to allow polluting companies and countries to buy and trade permits to lower global emissions, but the extremely dense and technical subject continued as a topic of discussion well into Saturday in Glasgow.

Negotiators announced a major deal on how to regulate the fast-growing global market in carbon offsets, in which one company or country compensates for its own emissions by paying someone else to reduce theirs. One of the thorniest technical issues is how to properly account for these global trades so that any reductions in emissions aren’t overestimated or double-counted.

Vulnerable countries insist that rich nations should grant them a share of proceeds from carbon market transactions to help them build resilience to climate change. The United States and the European Union have opposed doing so, but island nations in particular want a mechanism to ensure that carbon trading leads to an overall reduction in global emissions.

“We want a credible market that will deliver reductions in emissions, not just a free pass for countries to buy cheap credits offshore to meet their national requirements,” said Ian Fry, a negotiator for the Solomon Islands, an archipelago in the southwest Pacific Ocean.

Other international agreements came out of the summit

The different faces of climate action

There was a clear gender and generation gap at the Glasgow talks. Those with the power to make decisions about how much the world warms in the coming decades are mostly old and male. Those who are angriest about the pace of climate action are mostly young and female.

Malik Amin Aslam, an adviser to the prime minister of Pakistan, scoffed at some of the distant net zero goals being announced during the conference, including India’s: “With an average age of 60, I don’t think anyone in the negotiating room would live to experience that net zero in 2070,” he said.

On the first day of the conference, Greta Thunberg joined scores of protesters on the streets outside the United Nations climate conference in Glasgow. Throughout the two-week conference she and other young climate activists — including Vanessa Nakate, Dominika Lasota and Mitzi Tan — made numerous appearances at protests.

Ms. Thunberg told the BBC in an interview ahead of the summit that she had not been officially invited to speak. She added that she thought the organizers had not invited a lot of young speakers because they “might be scared that if they invite too many ‘radical’ young people then that might make them look bad,” she said, using air quotations.

Just holding the talks during the pandemic posed a challenge

The climate summit, which was delayed last year, is one of the biggest international gatherings held during the coronavirus pandemic.

Many summit participants traveled from countries where vaccines are still not widely available. Globally, fewer than half of all adults have been vaccinated against Covid-19, illustrating the inequities of vaccination. Travel and quarantine restrictions meant additional costs in both time and money for lodging, which made the trip impossible for some.

And some participants, like President Xi Jinping of China, Vladimir V. Putin of Russia and Jair Bolsonaro of Brazil, decided against traveling at all.

Partway through, conference organizers issued a letter of apology to participants for the long lines and video difficulties, saying that planning around Covid restrictions has been challenging. Patricia Espinosa, the executive secretary of the U.N. climate body, asked attendees to “bear with us” as organizers grappled with the complex arrangements, like ensuring that all those entering the venue tested negative for the coronavirus, and enforcing controls on the number of people in meeting rooms.