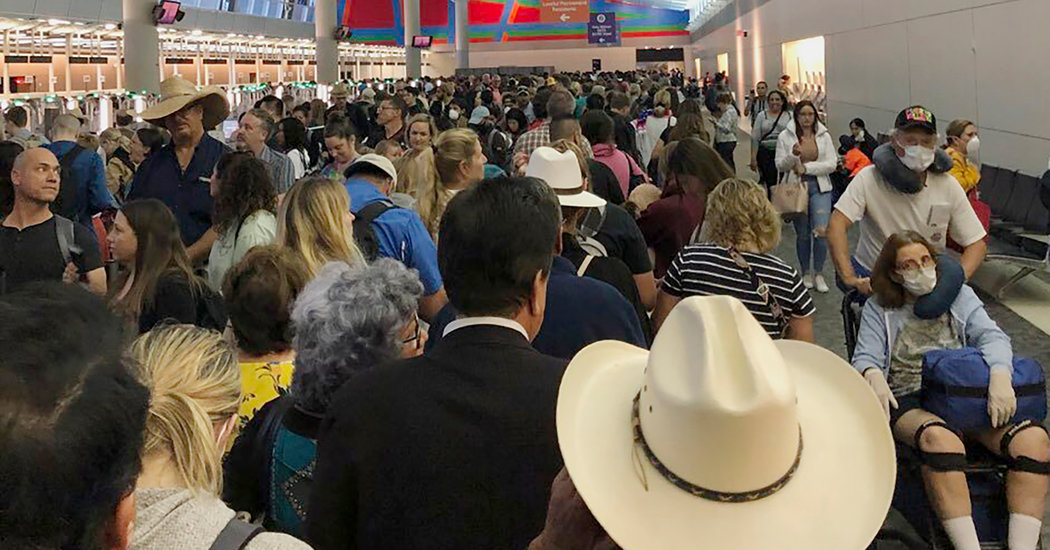 ATLANTA — After a night of chaos at some of the nation’s busiest airports on Saturday, officials scrambled on Sunday, with some apparent success, to reduce lines that had left people jammed together for hours as they waited for new health screenings mandated for travelers from Europe in the face of the coronavirus pandemic.

At around 2:30 p.m. on Sunday, roughly 20 minutes after their plane from Paris landed in Hartsfield-Jackson Atlanta International Airport, Joan Policastro and Tor Smitt were wheeling their bags to an airport shuttle. Their screening experience had gone very quickly, they said.

Ms. Policastro, a retired flight attendant, said that some people on the flight had their temperatures taken, with a device held to their foreheads, but it seemed to be a random selection.

“They just told us, you know, to stay quarantined in our homes for 14 days and they gave us some papers to look at, to read up on what we’re supposed to do,” she said. “When we deplaned they randomly took temperatures of passengers.”

At O’Hare International Airport in Chicago, officials braced themselves for another long night as a result of the new rules created because of pandemic. But travelers landing from Europe on Sunday said they had experienced wait times of between 30 and 90 minutes.

“This wasn’t bad at all,” Pam Lucatorto of Elgin, Ill., said of the time it took her son, a junior at Indiana University, to get through the line at the airport after his study abroad program in France had been cut short.

Gov. Jay Pritzker of Illinois said the Trump administration had promised him it would double the number of federal staff members at the airport.

Wait times as long as seven hours at O’Hare on Saturday night came in the wake of a new policy toward travelers returning from European countries, who went essentially from zero screening on Friday to “enhanced screening.”

John Cohen, a former acting under secretary for intelligence at the Department of Homeland Security during the Obama administration, said the hurried implementation of the screening posed health risks on Saturday night.

“It is critically important that before you announce that you are going to ramp up that type of screening, that you develop a plan and work out all the operational details,” he said. “People who were awaiting medical screening shouldn’t have been in the same area as people awaiting passport screening.” He added: “They may have potentially placed a significant number of inbound travelers at risk of being exposed. to the virus.”

“I found it a little ironic they had so many people waiting in the same area,” said Genevieve Couldwell, a doctoral student who lives in Salt Lake City and flew from London to New York on Sunday. “We went through this whole process only to be kept in a situation where there might have been more exposure.”

By Sunday afternoon, the new policy appeared to be operating more smoothly in many parts of the country. At Dulles International Airport in Virginia, travelers said they had breezed through the line.

In fact, some passengers on Sunday said they were angry at what they said was not enough screening.

“They didn’t swab us, they didn’t take our temperatures, they didn’t do anything but ask us how we felt,” said Linda Cole, from Williamsburg, Virginia, who was returning from a vacation in Portugal via Heathrow.

Her friend, Carol Schrader, said one of the people on their flight had been in their hotel in Portugal and had gotten sick, though it was not clear with what.

Ms. Cole added: “They asked me if I’d been in contact with anyone who had the coronavirus. I said no, but I probably have now,” she said, a reference to their wait with other passengers to reach the screening tables.

It is also possible that shorter waits on Sunday reflected planes being less full than those on Saturday, after many people had raced to leave Europe as soon as possible in the confusion set off by President Trump’s announcement on Wednesday of restrictions on travel from mainland Europe.

At John F. Kennedy Airport in New York, a flight from Rome on Sunday that landed at 3:25 p.m. only carried about 30 passengers.

Bill Kennedy, a business consultant from Minnesota who spent two weeks in Paris, arrived at Kennedy Airport on Sunday evening and said he was pleasantly surprised how easy it was going through customs.

“From reading the news I was afraid it was going to be a nightmare,” Mr. Kennedy, 46, said. He said his flight had been perhaps only a third full.

The new procedures for travelers from Europe were rolled out after weeks of what many international travelers described as worryingly lax controls at American airports. As late as last Monday, passengers returning from Italy reported no screenings and no information about self-quarantine, despite the fact that the Centers for Disease Control and Prevention has listed Italy as a “Level 3” country requiring self-quarantine since Feb. 28.

The new rules also ban travel for foreigners from more than two dozen countries in Europe, similar to the restrictions that had initially only been imposed on visitors from China. Foreigners who have visited any of the countries in the past two weeks are also prohibited from traveling to the United States.

Acting Commissioner Mark Morgan of Customs and Border Protection said in a statement Sunday that his agency “recognizes that the wait times experienced yesterday at some locations were unacceptable” and is “working around the clock” to remedy the situation.

Chad Wolf, the acting secretary of the Department of Homeland Security, acknowledged that an “unacceptable” situation had unfolded at a “limited number” of airports. “We continue to surge personnel,” he said, adding that the average wait time was now 30 minutes.

Angry international travelers said U.S. officials appeared unprepared for the deluge of people who were newly required to undergo the new procedures.

“We were handed this unofficial-looking form, with no federal markings on it,” said Tracy Sefl, who waited in lines with her husband for more than four hours at O’Hare Airport on Saturday night, only to be told that they shouldn’t have been sent for an enhanced screening since they had not traveled through Europe. The most concerning thing about the long lines, she said, was the they felt like a “massive incubator for virus transmission.”

“There were easily a few thousand people crammed together in this space,” she said. “Elderly. Babies. It was just this free-for-all.”

The sense of chaos has been heightened by confusion over Mr. Trump’s address to the nation on Wednesday night. He indicated that travel from the Schengen visa-free zone in Europe would be cut off on Friday at midnight. In the wake of those remarks, a flood of Americans rushed to return home from Europe, including Katherine Bieger, a 43-year-old clinical psychologist from New York who had just landed in Poland to attend a memorial service. She bought a new ticket to get home before the Friday night deadline, and missed the memorial.

“It is amazing how the calculus changed from one day to the next,” she said. At Kennedy Airport on Thursday night, she said, she wasn’t asked a single question or given any recommendation that she quarantine. “Zero.” she said.

Under the new screening rules, when travelers arrive at the 13 designated airports, they are to be interviewed by a customs officer, who will also review the person’s travel history using a Homeland Security database. The officer will ask them about their current medical condition.

If they don’t show symptoms, they will be asked to quarantine in their homes for 14 days. Depending on their symptoms and previous medical history, travelers could be subject to additional screening by a medical professional at the airport. They could also be subject to a federal quarantine.

Only 17 people have been forced by the federal officials at airports to quarantine since Feb. 2, according to a senior Homeland Security official. More than 30,000 have been asked to quarantine in their homes. There is no timetable on the current travel restrictions.

On Saturday, Mr. Trump said foreigners in the United Kingdom and Ireland also would soon be barred from traveling to the United States. Flights that depart those two countries after 11:59 p.m. on Monday will be subject to the same directives as other countries in Europe.

American citizens, legal permanent residents and their family members under the age of 21 who have visited the European countries in the past two weeks are allowed to return to the United States, but airlines will rebook their flights to one of 13 designated airports.