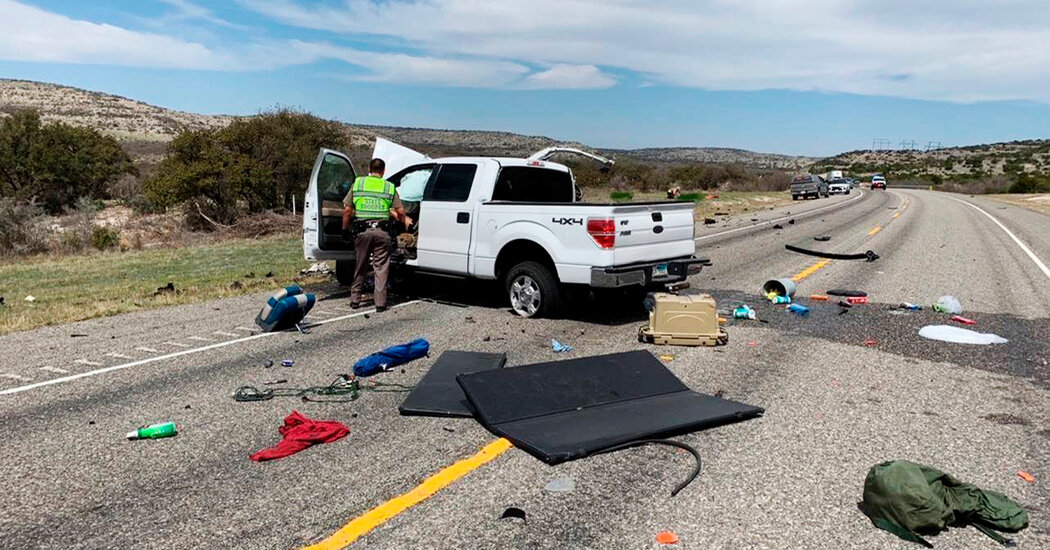 The victims were riding in a pickup truck that was being chased by the police when it collided head-on with another pickup near Del Rio, Texas, the authorities said.

Eight immigrants were killed on Monday afternoon when a pickup truck they were riding in crashed head-on into another pickup during a police chase in southwestern Texas, the authorities said on Tuesday amid a deepening humanitarian crisis along the Mexican border.

The accident occurred on U.S. Highway 277 about 30 miles north of the border city Del Rio, according to the Texas Department of Public Safety, which said that the Dodge pickup with the immigrants had evaded Texas State Troopers before the crash.

The authorities did not elaborate on what had led to the chase, but said the Dodge had caused a head-on collision with a Ford F-150.

The eight passengers in the Dodge who were killed, all undocumented immigrants, died at the scene, according to the Department of Public Safety.

The driver of the Ford and a child who was a passenger of that truck were hospitalized in stable condition, along with a ninth passenger of the Dodge pickup truck, according to a preliminary accident report.

The driver of the Dodge ran off after the accident but was caught a short time later, according to the authorities, who identified him as Sebastian Tovar, 24. They said that Mr. Tovar was in federal custody and was expected to be charged by the state.

The loss of life punctuated a period of intensifying scrutiny of the Biden administration over conditions along the Mexican border, where there has been a sharp uptick in the number of migrants from Central America seeking entry into the United States. On Tuesday, the head of the U.S. Department of Homeland Security warned that immigration authorities expected to make more apprehensions along the border this year than at any time in the last two decades.

The accident came less than two weeks after 13 people were killed in one of the deadliest border-related crashes in recent decades when a big rig slammed into an S.U.V. crammed with more than two dozen people in California.

Alejandro N. Mayorkas, the homeland security secretary, characterized the situation as “difficult” in a statement on Tuesday.

“We are on pace to encounter more individuals on the southwest border than we have in the last 20 years,” Mr. Mayorkas said. “We are expelling most single adults and families. We are not expelling unaccompanied children.”

The people who died in Monday’s accident were all Mexican nationals between the ages of 18 and 20, The Associated Press reported, citing information from the Val Verde County sheriff, Joe Frank Martinez. Seven of them were men and one was a woman, the sheriff said.

Photographs of the crash scene released by the Department of Public Safety showed what appeared to be the Dodge pickup upside-down in the grass on the side of the highway. Pieces of wreckage could be seen strewn on the road and the shoulder.