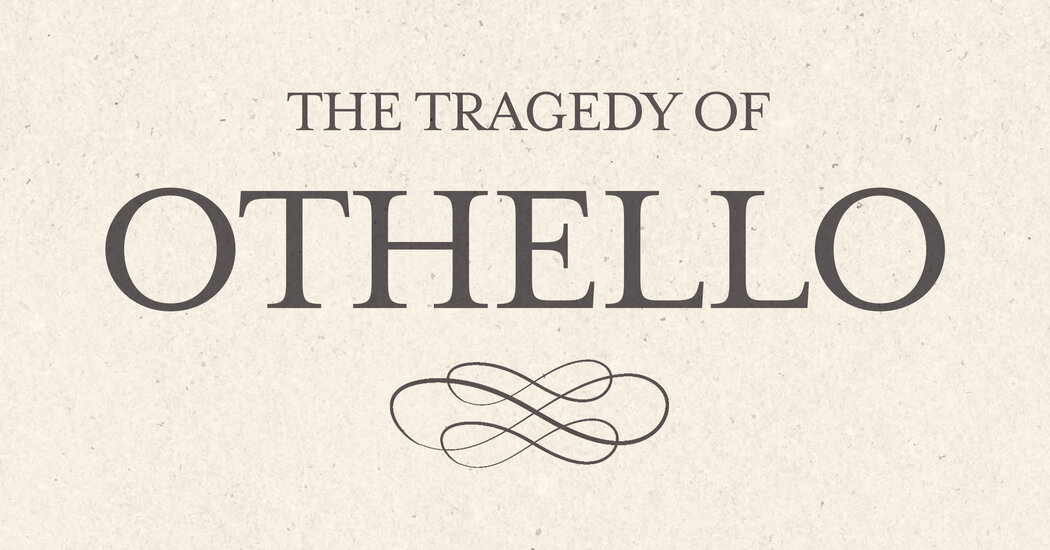 At the University of Michigan recently, the music professor Bright Sheng — who’s had a superlative career as a composer, conductor and musician — wanted to share with his students how Giuseppe Verdi transformed Shakespeare’s “Othello” into the acclaimed opera “Otello.” That transformation is a rich and instructive topic in music composition.

In September, Sheng showed his undergraduate composition seminar the 1965 film based on the Royal National Theatre’s stage production of “Othello,” with Laurence Olivier playing the title role in blackface makeup, in line with the custom of the era.

Some students took offense: One told The Michigan Daily that she was “shocked” and that Sheng failed to first contextualize what the class saw. Sheng apologized. Days later, the dean of Music, Theatre & Dance wrote that “Professor Sheng’s actions do not align with our school’s commitment to anti-racist action, diversity, equity and inclusion.” Sheng apologized again, and in an apparent effort to mitigate, offered examples of his professional support over the years for people of color. That drew criticism from grad students, undergrads and faculty, who, according to The Daily, called it “inflammatory” in an open letter calling for Sheng’s removal as course instructor.

In a Medium post, a writer identifying as a member of the class took Sheng’s department chair to task for, reportedly, recommending that the issue “may be something you ought to first discuss with Professor Sheng.” (The audacity.) The same post implied that Sheng’s alleged transgressions were as grave as, for instance, incidents of sexual harassment and abuse. If you want to read more, Cathy Young has provided invaluable coverage of what she correctly describes as yet another “moral panic.”

Sheng has left the class.

A common response to occurrences like this is to condemn the students involved as being overly delicate — snowflakes, in today’s parlance. However, merely leveling that charge doesn’t facilitate a constructive discussion about what fuels these sadly routine events. The underlying issue isn’t the students’ fragility, it’s that their approach illustrates the difference between radicalism and progressivism. It’s an example of a strain of thought permeating campuses (our whole society, really), one that blithely elides that difference in favor of preaching only of “social justice.”

Start here: What happened to Sheng would have been much less likely a generation ago. In the late 1990s, I showed a class of white, Black and Asian American students a scene from a film with white performers in blackface. Beforehand, I mentioned that this was a very old movie and that we were going to see a practice that nobody would venture today, but that the film was instructive for other reasons. None of the students batted an eye, at least that I could see. If anything, some of the Black students (and maybe some of the non-Black students) snickered at the performers for how ridiculous they looked.

So, here’s our query: Is the response of Sheng’s students an advance on those of my students a generation ago? Were me and my students missing something upon which our modern era is more enlightened?

Before we tackle that, there are two important points to address. First, as Young notes, Olivier’s performance does involve a degree of cartoonish swagger beyond what some blackface performances of the era entailed. But it’s reasonable to assume that Sheng’s students would have had a similar response to more restrained blackface portrayals of Othello, such as Orson Welles’s.

Second, Sheng should indeed have made clear that he was about to show his students something that would require them to put on their “history glasses,” as I sometimes put it. But the question involves degree: Should he now be barred from the class amid rhetoric that makes him sound like a pitiless bigot, unfit and out of step with an enlightened society? I’d say no.

Now: Let’s break down what the crux of objections to showing a blackface performance ever at all are.

The typical idea is that blackface is a reminder of the reign of minstrel shows, in which white performers wore blackface makeup and engaged in clownish distortion of Black speech and dance styles. Minstrel shows were core American entertainment for most of the 19th century, and well into the 20th. It was a filmic depiction of a minstrel show, in fact, that I showed my class: Al Jolson in 1930’s “Mammy.”

Minstrel shows were disgusting, all the more so in how utterly central they were in American entertainment for so very long. But is there no statute of limitations on how long a people will feel actual injury about such a thing? In 2021, there is barely a person alive who attended a minstrel show performed as mainstream, professional entertainment. Even those who may have caught ragtag amateur groups keeping the tradition alive are likely now quite elderly.

The idea seems to be that we (relatively) younger Black people and our non-Black fellow travelers are nevertheless so viscerally stung by seeing any manifestation of this bygone tradition that to show dated footage of a white British actor in blackface, as part of an academic colloquy, qualifies as a grievous insult. But I like to think of Black Americans as a people of pride and forward thinking. I miss those qualities in this submission to an insult leveled by perpetrators now very, very dead. And since no one can seriously argue that Sheng’s intent was to revive or exalt the practice of blackface — and not to teach something about the operatic adaptation of a seminal literary work — to treat him as an accessory to those dead perpetrators seems more a kind of performance in itself than a spontaneously felt insult.

Another idea would be that to imitate a Black person by trying to darken the appearance of one’s skin is, inherently, to ridicule that person. But is it impossible in the logical sense that someone might costume oneself as a Black person one admires and put on makeup to darken one’s face simply as part of seeking to look like that person? Many will heatedly object: “Impossible!” But we must attend to why. If the answer is minstrel shows, then see above.

These days, we’re expected to recoil, under any circumstances, at the idea of a white person attempting to make their skin look like the color of a nonwhite person’s, as if this were the automatic equivalent to using a racist slur, or worse. But context matters. A lot.

Is blackface being shown as part of a collegiate-level discussion, as in the Michigan case? College students shouldn’t need protection from an old film used to help them think about and debate the conversion of a classic over time. Sheng was using the film to stir and inform artistic consciousness. To read that situation otherwise is deeply anti-intellectual.

Is blackface being deployed comedically, not to make fun of Black people, but to lampoon the absurdity of racism? For example, in one episode of the sitcom “30 Rock,” Jane Krakowski’s character is made up in blackface and wears men’s clothing; Tracy Morgan’s character is made up in whiteface, a blond wig and wears women’s clothing in a “social experiment” to see who has it harder in America — white women or Black men. In another episode, Krakowski is made up in blackface and dresses as the Pittsburgh Steelers great Lynn Swann, who’s not derided in any way, the bit being a clever play on the movie title “Black Swan.”

Last year, not long after George Floyd was murdered, three “30 Rock” episodes that involved blackface, including those two, were taken out of syndication. The show’s producers, including its star, Tina Fey, may have concluded they had no choice. But we might ask why the sheer matter of the makeup was an insult to Black people. It’s not self-evident that pulling those episodes was morally necessary in 2020 because of careers like Jolson’s. The shows’ flashes of wit didn’t set Black people back in any way. It’s hard to see how a lighthearted plotline about racism and sexism, even with blackface, harms Black people — or how taking it off the air helps us. My horse sense tells me that the vast majority of us get that a joke can be a joke.

These are my own observations. They are up for debate. But those condemning Sheng seem to consider their ideas not just opinions, but truths — the predicate for an inquisition. Yet, the view that blackface makeup is so uniquely revolting that a professor should be hounded from his class for showing, in a scholarly setting, decades-old scenes of an actor wearing it is a point that many find extreme. It is a position that requires some serious lifting and a vast transformation in common modes of thought, even among people with good-faith concerns about race relations, and would look odd to time travelers from just a few decades ago. A position like that is not simply “antiracist,” but radical.

This radical proposition, like so many on race of late, is being put forth as if it were scripture that no moral actor could question. It misses the point, then, to dismiss the students as fragile. Their claim entails that people were injured by such usages of blackface before, therefore must still be now, and that we should redefine the bounds of permissibility to bar such images from general experience. They think their recoil from the very sight of decades-old racist imagery is uniquely enlightened, a resistance to abuse endemic to our society’s past, present and future. To them, their response isn’t only appropriate, it’s mandatory.

But that’s a proposition they must assert in the public square and assume as subject to discussion and dissent.

And let’s face it, in that discussion, this radical proposition would likely be voted down. Its adherents would deem this as racism winning out. But many others would see it as a victory for common sense, seeing the current fashion as a performance, a kind of, yes, virtue signaling.

Or just maybe, the people who witch-hunted Sheng could defend their position better than I am imagining. I’d be happy to observe the attempt. But from where I sit, we’re seeing a radical agenda not proposed, but imposed. Upon what authority are they allowed such primacy of influence in how we speak, think and teach in our times?

Have feedback? Send me note to [email protected].

John McWhorter (@JohnHMcWhorter) is an associate professor of linguistics at Columbia University. He is the author of “Nine Nasty Words: English in the Gutter: Then, Now, and Forever” and “Woke Racism.”