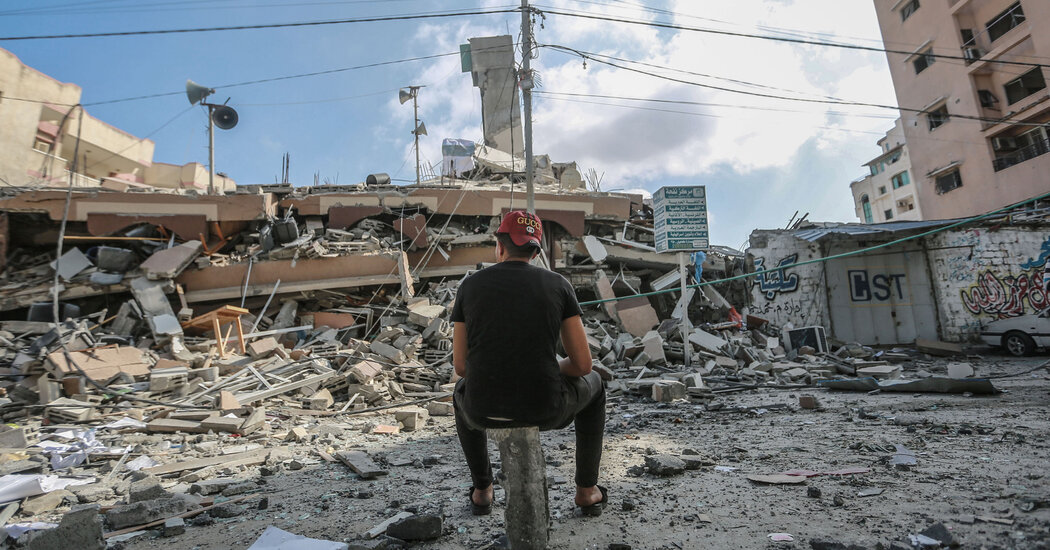 The cease-fire between Hamas militants in Gaza and Israel didn’t come a second too soon.

Israelis should not have to live in fear of rockets raining down, which killed a dozen people living in Israel since fighting broke out 11 days ago. Nor should people in Gaza live in fear that they might become collateral damage from Israeli bombs. Israeli airstrikes and artillery killed at least 230 Palestinians, including militants and many civilians.

Israel has a right — even a responsibility — to put a stop to the rocket attacks at their source. More than 4,000 were fired at Israel from Gaza in 10 days, though most were intercepted by the Iron Dome antimissile system. But the fighting took an unbearable toll on civilians, the vast majority of them Palestinian. More than 60 children in Gaza were killed, tens of thousands of people were displaced, and hundreds of buildings were destroyed or severely damaged.

The most intractable problems facing Israel and the Palestinians cannot be bombed away. When the dust settles, the misery and resentment will remain, starting in motion the next round of fighting. It is not in the interests of Israel, the United States or the rest of the world to make life unlivable in Gaza or to see another generation of children grow into adulthood knowing no government but Hamas, no economy but blockade and no certainty about the future except periodic bombardment.

As this round of fighting ends, two million people remain penned into 141 square miles of Gaza, with no escape from the devastation and economic blockade. There is now civil unrest and sectarian violence in communities in Israel that no Iron Dome or separation wall can parry. Across the region, hundreds of thousands of Palestinians mounted a general strike, the largest peaceful demonstration of unity in many years.

Political solutions are the only bloodless solutions. But politics is broken. Benjamin Netanyahu, who has been prime minister longer than any other Israeli, has been unable through several elections to gather a stable majority in Parliament. Mahmoud Abbas, the octogenarian and increasingly unpopular president of the Palestinian Authority, recently called off its first elections in 15 years, dashing hopes that a new generation of leaders might emerge.

The Biden administration could be forgiven for coming into office without any grand plans for solving one of the world’s most intractable geopolitical problems. Every year the “peace process” has yielded nothing but the aggressive expansion of settlements and shrinking areas of land for a future Palestinian state. The expansion has brought no lasting security for Israel.

There is a dire need for fresh thinking from the Biden administration both to meet the moment and to address growing calls from his party to reassess the U.S.-Israeli relationship. That pressure comes not only from young lawmakers to the left of the president but also from older, more hawkish Democrats. Senator Robert Menendez, the chairman of the Foreign Relations Committee, put out a statement last weekend calling for an end to hostilities. “I am deeply troubled by reports of Israeli military actions that resulted in the death of innocent civilians in Gaza as well as Israeli targeting of buildings housing international media outlets,” it read in part.

President Biden should not delay in appointing an ambassador to Israel and reiterate that American support doesn’t include support for settlements or endless occupation. There is also an urgent need for his administration to rebuild ties with the Palestinian people, which atrophied under President Donald Trump. In 2018 the Trump administration closed the office of the Palestine Liberation Organization in Washington, D.C., and also closed the U.S. Consulate in Jerusalem that had served as a quasi embassy for Palestinians. The consulate’s operations were folded into the U.S. Embassy, which had just relocated to Jerusalem. Palestinians boycotted the new office. As a result, American officials have had no meaningful and sustained political contact with Palestinian officials for two years.

The Biden administration should appoint an envoy to the Palestinian people, tasked with restoring relations with Palestinian officials and building ties with civil society groups and the new generation of leaders who have been shut out of power with the lack of elections. The portfolio should include Palestinian people, broadly speaking, including their vital ties to brethren in Israel and throughout the diaspora.

The Biden administration should also consider new ideas. One approach would be for American diplomats to take tangible steps to “improve the freedom, prosperity and security of all people living between the Mediterranean Sea and the Jordan River” while trying to preserve the possibility of a Palestinian state — a proposal outlined in a report by the Center for a New American Security.

Adopting this model would require American diplomats to speak out against restrictions on trade and freedom of movement for Palestinians and to advocate reducing the disparities in treatment of Israeli and Palestinian civilians. The secretary of state, Antony Blinken, appears to be leaning in this direction, writing on Twitter that “Israelis and Palestinians deserve equal measures of freedom, dignity, security and prosperity,” echoing language in that report.

Many Palestinians, as well as progressives in the United States and Israel, favor a second model, which would shift American policy in the region away from a nearly exclusive focus on obtaining Palestinian statehood and on Israel’s security to the protection of human rights. A number of analysts have floated this idea over the years, most recently in a report by the Carnegie Endowment for International Peace and the US/Middle East Project.

In an ideal scenario, the rights-based approach, as it is often referred to, would lead to the preservation of rights of Jewish Israelis — to life, to security, to their religious traditions and to the idea of a Jewish homeland — and address the rights of Palestinians to life, security, political representation, freedom of movement, freedom to work and to citizenship in a country that values them.

Many young Palestinians say their parents’ dream of an independent state has morphed into a struggle for civil rights within the borders of land that Israel has controlled since 1967. But there are some who believe in the two-state solution that this editorial board has long advocated and argue that the rights-based approach is a strategy to get Israel’s government to grapple with what a one-state reality would really mean, which might motivate them to get back to the bargaining table to establish a Palestinian state.

A cease-fire should be celebrated. But when the guns fall silent, the hard work of forging a more lasting peace needs to begin. If it does not, it’s only a matter of time before more innocent lives are lost again.