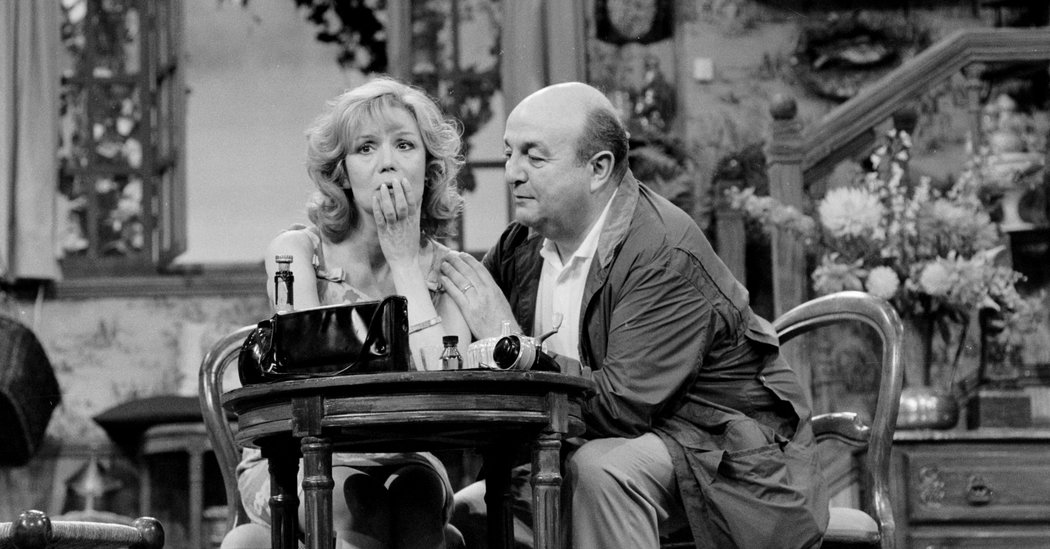 PARIS — Theater rarely pauses to mull over its past. What happens when the curtain rises next is the main preoccupation of stage artists and critics. Keeping up with the huge number of productions on offer is usually a Sisyphean task, leaving little room for historical perspective.

Yet with theaters currently shut around the world, time has opened up to look back. As luck would have it, the National Audiovisual Institute, which archives all French television and radio programs, began a new streaming platform, Madelen, shortly after a stay-at-home order was issued here in March.

Madelen gives subscribers a chance to watch theatrical productions that were taped for television from the 1950s on. While the platform is clunky to use, with no advanced search options and a limited catalog for now, it offers glimpses of theater’s early popularity on the small screen. And a sample of recordings from exactly half a century ago provides a window onto an onstage world that unfolded at a much slower pace than plays today.

As a snapshot of theater in France at the time, Madelen’s selection is skewed. It leans heavily toward what is known as boulevard theater, a mix of popular comedy, vaudeville and melodrama. Some of the most influential French directors of the 1960s and ’70s, from Roger Planchon to Ariane Mnouchkine and Patrice Chéreau, as well as the overtly political stage works that echoed the events of 1968, don’t get a look-in. (Programming decisions played a part, but some artists simply didn’t believe in TV as a medium for their work.)

Still, it is a welcome opportunity to re-evaluate what has long been considered a lesser genre. Theater history tends to erase boulevard productions in favor of more innovative and radical forms, yet most of the televised plays on Madelen averaged 15 million to 20 million viewers in 1970. They were shown on a popular program, “At the Theater Tonight” (“Au Théâtre Ce Soir”), that introduced the Paris theater scene to the rest of the French population. Under the guise of entertainment, they also spun well-crafted stories out of the era’s social mores.

What do they have in common? An obsession with death, crime and extramarital affairs, for starters. The stakes of domestic entanglements, all staged with conventional, realistic sets and costumes, are certainly heightened: Even the comedies are rife with casual death threats.

André Roussin’s “The Husband, the Wife and Death” (“Le Mari, la Femme et la Mort”), for instance, features a woman looking to hasten her husband’s death so she can inherit a secret fortune. In Jean Guitton’s “I Loved Too Much” (“Je L’Aimais Trop”), which takes place in a florist’s store, an unfaithful lover is shot not once but twice. At one point, the store’s oldest employee sighs, “No one believes in love, everyone uses it, and here is the result: a game of massacre.”

Cheating is portrayed as both a cardinal sin and a commonplace occurrence, for men and women alike. Robert Lamoureux’s “Here Comes the Brunette” (“La Brune Que Voilà”) alternately lionizes and punishes its hero, Germain, played by Lamoureux, for having four lovers at once. When the husband of one woman threatens to kill him if he doesn’t leave his wife alone, yet declines to give his name, Germain is forced to break up with all four women just in case: a comeuppance that leads him back to monogamy.

These 1970 productions reinforce how deeply social context shapes our storytelling expectations. “The Old Fogies Are Doing Fine” (“Les Croulants Se Portent Bien”), a 1959 comedy by Roger Ferdinand, initially sets up a generational clash when a divorced father in his late 40s introduces his 20-year-old fiancée to his adult children, who are the same age. To get back at him, they decide to find older partners, too: The daughter (played by a future star, Nathalie Baye) seduces her father’s best friend, while the son goes out with a 40-year-old widow. I naïvely expected the characters to conclude that the age difference was too great for all involved. Wrong: Ferdinand ends up extolling the virtues of dating a much older partner.

Par for the course, sadly, is the casual sexism woven into these productions, all written and directed by men save for a stage adaptation of Agatha Christie’s “And Then There Were None.” The age difference between male actors and their younger, more attractive stage partners is often stark. Women are cast as superficial housewives and airheads, easily overwhelmed by their emotions. In “The Husband, the Wife and Death,” a man even says to his wife, without a trace of irony: “I might rape you afterward, but it’s part of ordinary life.”

Elsewhere, women are also feared. “What About Hell, Isabelle?” (“Et l’Enfer, Isabelle?”), written by Jacques Deval in 1963, pits an investigative judge against a presumed “black widow,” the self-assured Isabelle Angelier (the superb Françoise Christophe), whose husbands keep dying shortly after naming her a life insurance beneficiary.

This slow-burning detective story would probably never make it to the stage today. The static set of the judge’s nondescript office and the long exchanges between the main characters would be seen as lacking variety and energy. Audiences have grown used to rapid-fire scene changes, and crime stories are told very differently in current movies and TV series. Yet “What About Hell, Isabelle?” shows, by fleshing out the characters’ psychology without quite solving its central mystery, that there is value in a more old-fashioned approach, too.

In 1970, there was relatively little of the frantic movement that often fills the stage nowadays. The technical constraints of filming at the time may have played a part in how these productions come across, but the moments of silence and stillness also allow viewers to process the action differently. Three knocks are even heard every time the curtain is about to rise, an old French stage tradition that has fallen by the wayside, and it is also a joy to hear the clear, occasionally overemphatic diction of this generation of French actors.

There is at least one play on Madelen that is ripe for a contemporary spoof: “Frédéric,” another work by the prolific Lamoureux, who was a star of the boulevard stage for several decades. It is an absurd, over-the-top spy story about a man, Frédéric, who has the ability to recite perfectly from memory every page he has ever read. When he accidentally reads an atomic physicist’s top-secret formula, he instantly becomes a sought-after commodity in an international arms race.

A self-involved antihero, Frédéric is reminiscent of Jean Dujardin’s role as the James Bond surrogate in “OSS 117,” a parody French film franchise that began in 2006; a tongue-in-cheek revival of “Frédéric” (minus some racist lines that have aged poorly) might well be similarly entertaining. When theaters reopen, there will be plenty of plays about our current ordeal. Perhaps a few unexpected blasts from the past would be welcome, too.