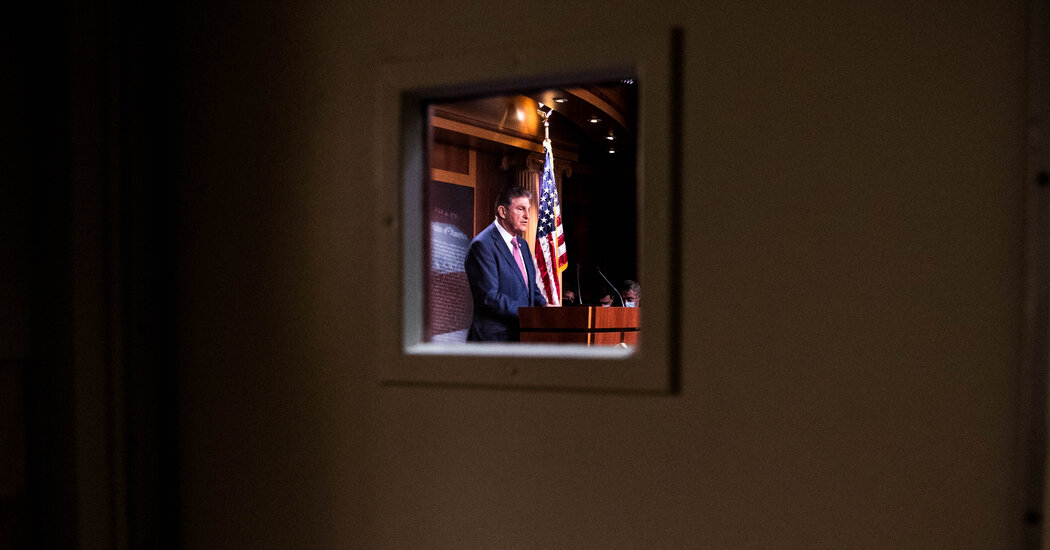 The promise of Joe Biden’s candidacy for president was his potential to assemble a coalition of progressives, liberal and moderate Democrats, and even disaffected conservatives looking for an alternative to Donald Trump. In 2020, this meant that Mr. Biden won a solid, but not landslide, victory.

In 2021, it means he has to govern with that coalition. Like Franklin Roosevelt and Lyndon Johnson, he came in with an ambitious, even transformative agenda. And like those presidents, he leads a party that’s a jumble of interests and viewpoints. But those earlier Democratic presidents had numbers, and solid majorities, on their side.

After the latest twist by Senator Joe Manchin of West Virginia in the Build Back Better drama, Democrats are weathering a storm of accusations of being plain bad at politics. This is nothing new: As a party of representing many groups, Democrats have always struggled to nail down party priorities and deliver on their campaign promises. But what is new is that for the Biden administration, those challenges have been compounded by a very narrow majority, nationalized politics and new ideological currents.

Democrats, as ever, have to figure out how to represent a diverse group of voters with different interests and outlooks. It is even tougher in 2021 because they have to find a way to mend the disconnect between the party’s ability to assemble a broad coalition at the ballot box and the struggles it faces in legislating.

This combination of the old and new Democratic Party has left the Biden coalition in a holding pattern. What might look at first like problems with individual politicians is in fact several structural problems at once: the counter-majoritarian institutions in American government; the fuzzy balance of power among different forces within the party; and the difficulty of energizing a diverse set of interests around common goals.

Negotiating with pivotal senators who are more conservative than much of the rest of the party isn’t a new thing under Mr. Biden — it’s also the story of the New Deal. Roosevelt had to deal with several conservative Southern Democrats. Today, Mr. Manchin and Senator Kyrsten Sinema of Arizona are actually in line with many recent Democratic proposals, but they can still extract concessions that don’t necessarily reflect the bulk of the party’s priorities.

Nationalized party politics make it more difficult for these senators to cultivate a local, personal brand. As a result, they have to work harder to draw media attention to their performances of political independence and willingness to push back against the president and congressional leaders. Because it’s harder for them to distance themselves from the national party brand, they’re harder to negotiate with.

The second change is the emergence of a strong and cohesive left wing within the Democratic Party. It’s true that the party is more uniformly liberal than it has been in the past. But this means different things. The so-called Squad and the rest of the Progressive Caucus bring both a more economically left perspective and a different vision on issues like race and criminal-justice reform. The presidential candidacies of Bernie Sanders and Elizabeth Warren showed that there’s solid support for moving to the left on economic issues — even if it’s not a majority of the Democratic coalition. In addition to appeasing the more conservative wing of the party, the Biden coalition also features tensions between this new progressive faction and more traditional liberals represented by members like Speaker Nancy Pelosi.

It’s likely that a smaller, patchwork Democratic coalition is here to stay for a while. This means that they will still face some of the same problems Presidents Roosevelt and Johnson did — like risk-averse party members and vocal campaigns against expanding the welfare state — but without a key tool for getting things done: large majorities (or the possibility of regularly picking up Republican votes on major legislation).

As a result, Democrats might be doomed to more cycles of lengthy negotiations and under-delivering on progressive promises. But there are a few changes that could shake up which groups hold power within the party, making it more responsive to a broader range of its voters. One route is to strengthen social movements, which could both keep progressive issues like green energy and student debt on the public agenda and possibly help to elect more progressive Democrats. Such movements could also help to mobilize different groups of voters around shared priorities like health care and economic insecurity.

The other — which has drawn the most attention in the past year, though little progress — is institutional reform. This approach isn’t so much about enlarging the Democratic coalition as it is about reforming the rules of governance to allow a party that already regularly wins national elections to wield proportionate influence in governing. These proposals include filibuster reform and making Congress more proportional. Proponents argue that these changes would ease the veto power that less populated and more conservative areas of the country hold over the majority.

But the balance of power within the patchwork Democratic Party is not just about institutions, or even about narrow majorities. It’s also about the influence of wealthy interests over public opinion. The persistent inability of a majority party to enact policies that reflect the opinions of its constituents means that we ought to look at the forces at work. Mr. Manchin is an especially good example of this dynamic — powerful voices in West Virginia have come out in support of Build Back Better, but the senator has serious ties to the fossil-fuel industry. Ms. Sinema’s hesitance to support party priorities has also been linked to her ties to powerful industries rather than any ideology or what Arizona voters want.

These problems also require structural solutions — tightening regulations over conflicts of interest for members of Congress and enacting lobbying reform. The party’s survival may depend on its ability to represent its own voters and not the corporate interests that still have a powerful veto in the legislative process.

Finally, the party could scale back on its policy agenda. But recent history suggests that “change” candidacies — from Barack Obama to Donald Trump to Bernie Sanders — resonate with an electorate that craves change, even if they can’t agree on what kind.

Many of the Democrats’ problems in the legislative process are not of their own making. But, fairly or not, Democratic leaders will need to think differently about how power flows through their coalition if they want to see their successes in electoral politics turn into policy achievements.

Julia Azari (@julia_azari) is an associate professor of political science at Marquette University and the author of “Delivering the People’s Message: The Changing Politics of the Presidential Mandate.”