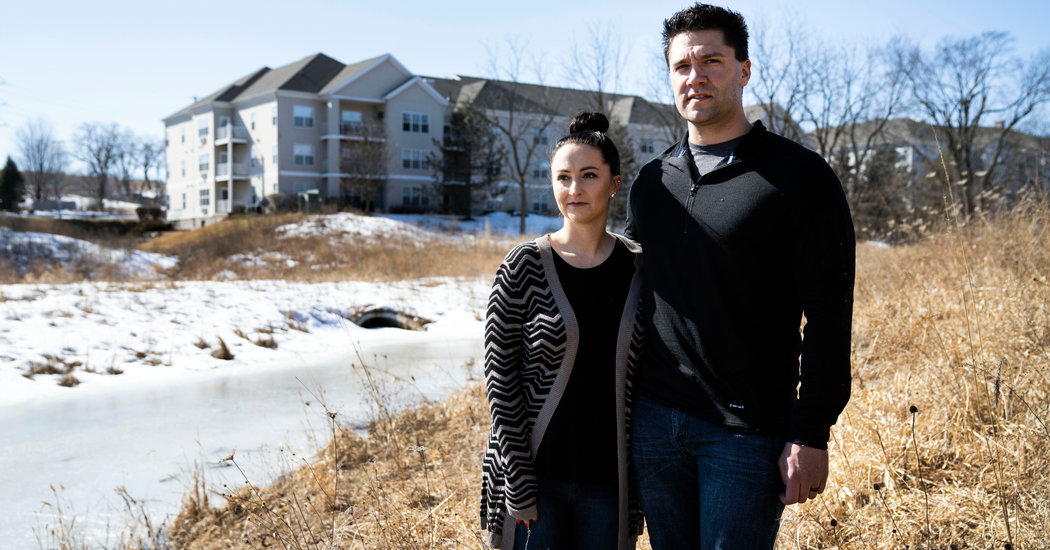 It started with an ambulance ride when he was 18 and two hospital stays. Then came college loans. By the time Mr. Michelz made it out into the world, his credit score was so low he could not even get a credit card. He has paid for everything he has ever bought — televisions, furniture, cars — up front. After grocery shopping on Wednesday, his bank account had three dollars in it.

Mr. Michelz, 29, has never worn a political T-shirt or been to a campaign rally. But when he voted for the first time in his life, in the primary of 2016, it was for Bernie Sanders.

“I wouldn’t say I’m on the left, or a liberal progressive,” Mr. Michelz said in his apartment one morning last week, sitting next to his wife, Sarah Michelz, who had just come home from her work as a nurse. “I feel like Sanders understood — there’s too much medical debt and college debt. I was like, ‘OK, he’s speaking the truth.’”

Mr. Sanders has staked his campaign on the promise that he can draw in voters who have felt left out of politics — in particular the young and the working class, especially in regions like the Midwest where Democrats lost to Donald J. Trump in 2016.

Now, as the fight for the Democratic nomination approaches what could be a final, critical stage with primaries in Michigan and Wisconsin, the future of his candidacy rests on these voters and whether they will turn out in larger numbers than they have so far. The Democratic Party also faces a risk: Should Mr. Sanders lose the nomination, some of his supporters — tired of being offered conventional solutions — could sit out the general election, or vote for Mr. Trump or a third-party candidate.

For voters like Mr. Michelz (pronounced Michaels), Mr. Sanders has inspired loyalty because he is the rare political leader who has both diagnosed the source of their problems and tried to offer solutions. Mr. Michelz is part of a generation scarred by the Great Recession. After borrowing more money for their education than their parents did, many are treading water in jobs that do not pay enough and delaying marriage and children.

Mr. Michelz’s wife has debt, too, as do most of his friends. One is so anxious about it that he takes medication. The only ones who do not have debt come from families that can afford to help them.

Ms. Michelz, 30, borrowed around $100,000 for nursing school, and pays $800 every month, a sum that is more than half their rent in the small, tidy apartment on the southwestern edge of Madison. They both want children, but Ms. Michelz thinks they should wait.

“I want to be slightly more comfortable financially,” she said, “to have a little extra cushion.”

Mr. Michelz has heard the critiques of Mr. Sanders: He is unelectable. He is radical. His programs cost too much. He knows the senator is not perfect. But he likes his direction.

He plans on voting for Mr. Sanders in the Wisconsin primary next month. But he is not sure what he will do in November if Mr. Sanders is not the nominee.

Mr. Sanders is certainly a better choice than Mr. Biden, he said, who looks like “an ordinary, run-of-the-mill politician,” who is influenced by money and power in the same old ways.

“When I look at him, I don’t see real change or anything like that,” he said.

Mr. Michelz grew up in a large house with a pond at the end of a long driveway a few miles from Yale, a tiny town in rural Eastern Michigan known for its annual bologna festival. His grandparents lived nearby and owned an apple orchard. He spent summers clearing it of brush and weeds.

His grandfather was political — an avid Rush Limbaugh listener who always voted Republican. But his parents, absorbed with their own troubles, were not. His father, who worked on telephone lines, abused his mother, sometimes violently. He could be loving, playing catch with Mr. Michelz and his brother after work. But he could also be frightening, once shoving Mr. Michelz across the living room when he misbehaved. When Mr. Michelz was 13, his father killed himself.

The experience turned Mr. Michelz into a skeptical person who did not trust easily. He developed a keen sense for when adults were being sincere — and when they were not.

“I sought out anything that was real,” he said.

News and popular culture — and by extension politics — felt fake. One day something was true, and the next day it was not. He remembers seeing something on TV that said chocolate was bad for you. The next day there was something that said it was good for you.

“It was like everything was for sale,” he said. “I always thought reality TV shows were really embarrassing. News was lumped in with that.”

In 2008, the financial crisis tore through his family. His mother lost their house that she had fought to keep after his father’s suicide, and she and her two sons had to move in with Mr. Michelz’s grandparents.

That year, when Mr. Michelz was 18, he took a part-time job cleaning out houses after they had been foreclosed on. He saw closets stuffed with cherished possessions — photographs, prom dresses, watches — and threw these things into dumpsters. Once, a man begged him to open the door so he could retrieve his belongings.

It was a searing experience and the beginning of his political education.

“When I hear Bernie’s forgiving debt and people say, ‘It’s way too expensive,’ I think, you did the craziest thing for the banks,” he said of the bailouts. “Yet normal families were thrown in the street, literally.”

He continued: “The middle finger was given to our family, while the rich guys got off scot-free.”

By 2012, Mr. Michelz was attending a small Lutheran college in Minnesota. He started paying more attention to the news. He was spending a lot of time online and started looking up things he had heard, like the line from the protesters at Occupy Wall Street that the top 1 percent of Americans had more wealth than close to half of the rest of the country.

“At first I thought it couldn’t be true,” he said. “It just didn’t make sense.”

It was around this time he first saw Mr. Sanders — on his grandparents’ TV talking about health care. Mr. Michelz looked him up and saw that he had been saying the same thing for years. He liked what he heard. He thought about his $24,000 in medical debt and how arbitrary it seemed.

As for the economy, nothing made sense. He spent years in college classes learning teaching, but ended up working in a tire store because it paid better. He went to college, just like everybody said he should, but is now working in a job that does not require a degree.

Mr. Sanders seemed to be telling him why his life looked and felt the way it did. His financial instability was not some individual failure, but a function of a broader economic system that had become so unequal that fixing it was a moral calling.

What Mr. Sanders proposed “was creating the conditions to make people’s lives less stressful,” he said.

And as for the arguments against Mr. Sanders — all these things he wanted would cost too much and would cause economic chaos and people to suffer — that was already happening, he thought. Domestic violence, families breaking apart, children not getting the care they needed — the common thread was the economic system.

The fact that Mr. Sanders was rejected by the establishment merely proved his worth for Mr. Michelz.

“I knew it was OK to be hated by the mainstream,” he said.

So on March 8, 2016, he rode to the polling station in Yale with his grandfather. Rush Limbaugh was on the radio. When they walked inside, he voted for Mr. Sanders and his grandfather voted for Mr. Trump. It was his first time voting, but he does not remember feeling much of anything.

“I just thought, I’m going to at least put my voice in a direction, even if no one hears it,” he said.

Mr. Michelz never considered voting for Mr. Trump, finding him unappealing and bothered by his stance on climate change. But he does not hate him. Some of the people he loves most voted for him. He understands why.

“The truth is, they are speaking to a frustrated America,” Mr. Michelz said of political candidates. “That’s why someone who is as ridiculous as Trump got elected. People wanted to see someone who wasn’t proper, who wasn’t afraid of the establishment. He appealed to people who thought it was all becoming a sham.”

He added: “It’s the same thing with Bernie.”

In November, he did not vote. Looking back, he does not regret it.

Four years later, he has even more at stake.

Mr. Michelz is now married. After years of blocking out his ruined credit score, he cares a lot about it. He still cannot get a loan, which means leasing a new car is out of the question. He wants badly to buy one with heated seats for Sarah. Instead they are stuck with their old models. He recently poured $3,000 in bonuses from his job at the tire shop into his car.

Sometimes Mr. Michelz worries about not providing enough for his family.

“I think about Sarah,” he said. “She’s around doctors every day. Does she ever have a thought, ‘I could be with someone who makes way more money?’ I know that’s irrational. On the one hand I’m bothered by it. But on the other, I know I’m giving 110 percent.”

So, he tries to show her every day that he loves her. He often buys her flowers. Last Thursday, a small vase in the kitchen held two carnations and a rose.

“Sometimes yeah, I feel shame,” he said of his financial situation. “But I fight it because I know it is not of my doing.”

All of this has brought him back to politics, which he now knows is the thread that runs through many of these problems. This year he found that he loved Andrew Yang.

“To me, he made Bernie seem outdated,” he said. When Mr. Yang dropped out, “I was bummed, but I was happy, too. His message got out there.”

He feels wiser now. He no longer believes the American story that everyone should be able to pull themselves up by their bootstraps.

“That’s a big lie that benefits the rich and keeps the system the same,” he said.

He will still vote for Mr. Sanders, though he knows it is a long shot.

“Even if it doesn’t work, I’m going to throw my vote that way,” Mr. Michelz said. “I have nothing to lose.”

Will he vote in November?

If he thought Mr. Sanders had been treated unfairly by the Democratic Party establishment, “it’s possible I might just vote for Trump,” he said.

He sounded a bit sheepish.

“That might be immature, that might be bad,” he said. “But I guess I still don’t view Trump as Hitler either.”

But would he vote for Mr. Biden?

“You know, I don’t think I would,” he said. “Nothing against him as a person. But my life probably wouldn’t change if he became president. I don’t think other peoples’ would either. So, what’s the point?”