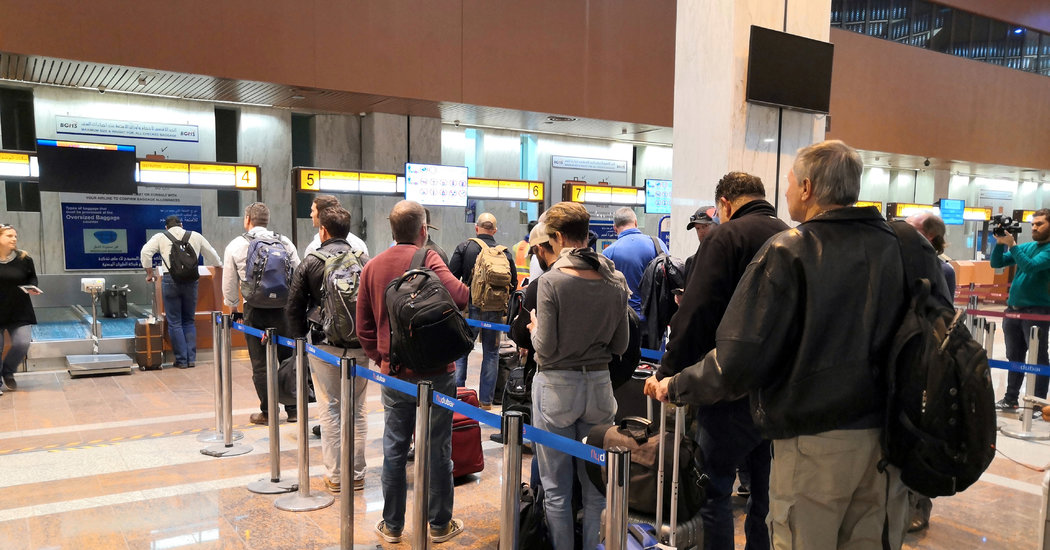 BAGHDAD — American oil workers were fleeing Iraq on Friday, as fears grew of war between the United States and Iran. At sermons in the Shiite holy city of Karbala, worshipers chanted, “Death to America!”

And in Tahrir Square in central Baghdad, where antigovernment protesters have gathered for months, a banner went up with a pointed message to both Iran and the United States: “Keep your conflicts away from Iraq.”

Iraqis awoke to the news on Friday that Maj. Gen. Qassim Suleimani of Iran, the architect of Iran’s dominating influence over Iraq, had been killed in an American drone strike near the Baghdad airport, along with several others.

Even before the shock of the brazen killing wore off, Iraqi factions were weighing their responses. Militias with ties to Iran vowed bloody revenge. The prime minister, Adel Abdul Mahdi, condemned the attack as “an outrageous breach to Iraqi sovereignty” and said Parliament would meet to discuss the future of the United States presence in Iraq.

Anti-government protesters, who have been protesting Iran’s stifling influence in the country, were worried their movement could be snuffed out by pro-Iran militias. And throughout the country, there was the familiar feeling that Iraq was a mere bystander in the broader geopolitical conflict between the United States and Iran taking place on Iraqi soil.

More broadly, the events raised a single, overarching question: can the United States maintain a cooperative security relationship with Iraq given the upheaval the assassination has provoked? The question was already coursing through the halls of power in Baghdad, even as the Trump administration said Friday that it was rushing new troops to the region in response to the crisis.

The airstrike on General Suleimani “was a clear breach of the terms of the American forces’ presence,” Mr. Abdul Mahdi said.

He said that Parliament would meet in the coming days to consider “appropriate measures to preserve the dignity of Iraq and its security and sovereignty,” including whether to ask the Americans to leave.

It could well turn out that the killing of General Suleimani, intended as a shot against Iran, could accelerate one of Iran’s long-term objectives: pushing the United States military out of Iraq.

“I think in his death he put the final nail in the coffin of the U.S. military presence in Iraq,” said Mohammad Shabani, a doctoral researcher at the School of Oriental and African Studies in London who focuses on Iran-Iraq relations. “If Iran can erase the U.S. military presence in Iraq and all it has to do is give up five Iranian military men, would Iran do it? I think the answer is yes.”

The United States has nearly 5,000 troops in Iraq on a handful of bases.

But whether they stay or go, the American power in Iraq was only likely to be diminished.

“One sure result of the U.S. strike is that the era of U.S.-Iraq cooperation is over,” Richard N. Haass, the president of the Council on Foreign Relations and a former American diplomat, wrote on Twitter. “The U.S. diplomatic & mil presence will end b/c Iraq asks us to depart or our presence is just a target or both. The result will be greater Iranian influence, terrorism and Iraqi infighting.”

More than 16 years after the American invasion of Iraq, a devastating conflict that cost close to $1 trillion and claimed about 5,000 American lives, Iran is the dominant power in Iraq, and its grip on Baghdad was on vivid display this week, even before General Suleimani’s killing.

When American airstrikes attacked the bases of a pro-Iranian militia on Sunday, killing at least 24 of its fighters, Iraqi officials spoke in one voice condemning the United States for violating Iraqi sovereignty, but few criticized the militia for carrying out the attack that killed an American contractor and precipitated the airstrikes.

When militia fighters marched on the American embassy on Tuesday to attack it, Iraqi security forces stepped aside to let them pass.

And as they lay siege to the embassy, setting fire to buildings and effectively blockading embassy personnel in the embassy overnight, Prime Minister Abdul Mahdi found that he was powerless to get them to leave.

For 24 hours, he held almost constant emergency meetings with the militia leaders, urging them to withdraw, according to officials involved in the meetings.

“Please, you are putting me in a critical situation,” he begged, according to Brig. Gen. Abdul Karim Khalaf. “We are a state, and we have to conduct ourselves as a state. We have to protect these embassies.”

He finally persuaded the militia leaders to withdraw their forces only by threatening to leave his job and “leave the country to chaos,” according to Iraqi officials familiar with the exchanges.

Experts said that if the Trump administration had a strategy to work with the Iraqi government to achieve stability and sovereignty — through diplomatic and economic engagement — the killing of General Suleimani in a drone strike early Friday would have provided a measure of leverage.

Kenneth M. Pollack, a former C.I.A. official who is an expert on Iraq and Iran at the American Enterprise Institute, said the assassination means that, at least for a time, “Iraqi politicians will be less fearful of Iran and more willing to listen to the Americans.” The Iranians in Iraq, he said, having lost their leader, will be on their heels, trying to figure out what to do next.

But, he said, the United States seems to have no policy on Iraq beyond using the country as a base to confront Iran.

“I have been talking to my friends at State and there is no effort to use this to push Iraq in a better direction,” he said. He called the killing “a tactical move directed at Iran without a wider regional strategy.”

Iran, on the contrary, is deeply embedded in Iraq on many levels.

“The United States has only one color, it is the military color, that is all that it spends its money on,” said Qais al-Khazali, the leader of a pro-Iranian militia. “But Iran has many colors — in culture, in politics, in religion, in many spheres.”

On the streets, some Iraqis celebrated General Suleimani’s demise. Secretary of State Mike Pompeo posted an image of Iraqis waving their country’s flag, describing them as, “dancing in the street for freedom; thankful that General Suleimani is no more.”

The reality on the streets, where antigovernment protests have swelled, with calls for an end to Iran’s influence, was something else, though, as fear of what may come outweighed any jubilation over the killing of General Suleimani.

Faiq al-Shakhe, a member of Parliament, said the demonstrators showed, “no signs of happiness or celebration.” Instead, he said, they were worried about a violent response from Iran-aligned militias, who have already killed many protesters and may now, more than ever, see them as agents of the United States.

“It was a wrong act from America because America should have coordinated with the Iraqi government,” said Ameer Abbas, a protester, who shared the widespread view that the American attack was a violation of Iraqi sovereignty.

Another protester, Mustafa Nader, said, “we are all against foreign interventions, whether from Iran, Saudi Arabia or the United States. We do not have a personal problem with Iran, but if America were to intervene at the same level as Iran, you will see as much objection as there has been against Iran, and maybe stronger.”

Emma Sky, a former adviser to American forces in Iraq and a senior fellow at Yale, said the American-Iraqi relationship “is going to be really damaged” by the killing. “I think there will be more calls for the U.S. to withdraw troops,” she said.

She said Americans will be hard pressed to justify a continued presence in Iraq because of the perception that its objectives are not aimed at promoting a stable Iraq, but containing Iran.

While Iraq’s Parliament is sure to take up the issue of the American troop presence, few expect the government to actually expel the Americans. Many Iraqi leaders still view an American presence as vital to its security, and depend on American training of the Iraqi security forces and, for better or worse, as a counterweight to Iranian influence.

Still, the Americans are left with few vital defenders in Iraq.

“No one is going to speak up for us, despite all we’ve done and in spite of the mistakes — and God knows we’ve done some bad ones,” said Ryan Crocker, a former United States ambassador to Iraq and now the diplomat in residence at Princeton University. “All we’ve given Iraq, and the Shia in particular, were things they could never have dreamed of before 2003. But that was then and this is now.”