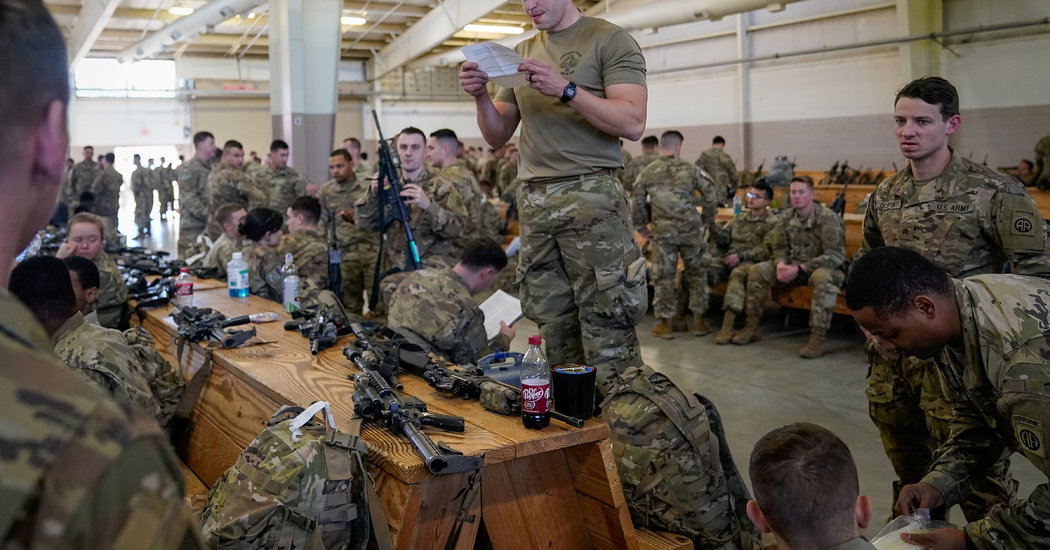 WASHINGTON — If even the Pentagon does not know whether it is coming or going in Iraq, it might be hard to blame the rest of the world for being a little confused about President Trump’s strategy for the Middle East.

As Iranian missiles fell on bases with American troops on Tuesday in retaliation for the drone strike last week that killed Iran’s most powerful general, the administration has scrambled to explain its mission and goals in the region amid a chaotic brew of conflicting statements, crossed signals and mixed messages.

The president who promised to bring troops home from the Middle East is now dispatching more instead. The Pentagon sent a letter saying it was withdrawing from Iraq, only to disavow it as a mistake. The State Department talked about “de-escalation” while Mr. Trump beat the war drums describing all the ways he would devastate Iran if it harmed more Americans. And even then, the president was forced to back off his threat to target Iranian cultural sites after his own defense secretary publicly said doing that was a war crime.

Likewise, the administration’s explanation for authorizing last week’s strike has varied depending on the moment. At first, officials emphasized that Maj. Gen. Qassim Suleimani, the commander of Iran’s elite security and intelligence forces, was eliminated to prevent an “imminent” attack that could take hundreds of American lives. But in the last day or so, Mr. Trump and others focused more on retribution for General Suleimani’s past attacks on Americans.

“The messaging has just been horrible,” said David Lapan, a former Department of Homeland Security spokesman early in the Trump administration who is now at the Bipartisan Policy Center. “It’s just been all over the map. At a time when you have something so serious, you need clear communication and instead what we got was contradictory, confusing communication from an administration that already has a trust deficit.”

With Mr. Trump, so much of his presidency is situational — he careens like a bumper car from one crisis to another, many of them self-created, rarely pausing to set a straight-ahead course but never lacking for energy and always willing to ram into other vehicles. No matter how much aides try to impose an orderly process, he still prefers seat-of-the-pants governance, leaving advisers scrambling to adjust.

Mr. Trump has long said that he likes to be unpredictable and sees that as a strength, meaning he can take enemies by surprise, as he did in taking out perhaps the second-most important figure in Iran, one with much American blood on his hands. But it leaves allies guessing just as much as adversaries, making it a challenge to build support for Mr. Trump’s decisions.

“The messy process explains the messy day after — sloppy explanations of the threat, disorganized public statements, and hasty diplomatic and military efforts,” said John Gans, a former chief Pentagon speechwriter and author of “White House Warriors,” a history of the National Security Council. “And it arguably limited the effectiveness of the policy and made it far riskier for the country and president.”

Michèle A. Flournoy, a former under secretary of defense under President Barack Obama who turned down a chance to serve as deputy defense secretary for Mr. Trump, said the chaotic nature of the current foreign policy stemmed from an “impulsive, inconsistent” president without a functional national security process that would ensure that “second- and third-order consequences” were fully considered.

There is “no real strategy or shared framework,” she said, “so tactical decisions are made in a vacuum or untethered from broader U.S. national security objectives.”

Administration officials dismiss questions about conflicting messages, saying that Mr. Trump’s strategy in the Middle East has been built on protecting American interests.

“At the end, our Iran policy’s about protecting and defending the homeland and securing American lives,” Secretary of State Mike Pompeo told reporters on Tuesday. “I know that the efforts we have taken not only last week with the strike against Suleimani, but the strategy that we have employed has saved American lives.”

In some ways, the strike against General Suleimani was seen by his advisers as a corrective to the president’s past decisions not to retaliate against Iran for various provocations, decisions that his team became persuaded were misunderstood in Tehran. In that sense, the strike was an attempt to recalibrate Mr. Trump’s policy in stronger terms.

“The president’s been very restrained and they took that restraint and that good will as the president tried to open negotiations with the Iranians — remember he offered to speak with them unconditionally — they took that as a sign of weakness,” Robert C. O’Brien, his national security adviser, said on Tuesday on Fox News. “I think they understand now this president means business. They made a bad mistake in how they read his restraint, which was admirable.”

But unlike Mr. Obama or especially President George W. Bush, who gave long, comprehensive speeches explaining their approach to the wars of the Middle East, Mr. Trump rarely takes the time to lay out his thinking in any depth. Instead, he offers Americans edgy tweets or clipped sound bites in short encounters with reporters, leaving it to others to outline his strategy, although he plans a statement of his own on Wednesday morning.

Until now, the main person doing any explaining since the strike on General Suleimani has been Mr. Pompeo, although Vice President Mike Pence is scheduled to give a speech on Monday describing the administration’s Iran policy at the Foundation for Defense of Democracies, a group that has led opposition to the Tehran government.

Mr. Pompeo has been a forceful public advocate for both the president generally and the strike specifically, but he and others like Defense Secretary Mark T. Esper have been caught out trying to talk their way around things the president has already said. When Mr. Trump threatened to target Iranian cultural sites in violation of international law, Mr. Pompeo insisted that was not what he meant while Mr. Esper gently but unmistakably made clear the military would not do it.

Mr. Pompeo has been pressed to explain the reasons behind the attack at this time given that General Suleimani has been responsible for the deaths of American soldiers in Iraq going back many years. Asked on Tuesday to elaborate about the “imminent” attack he previously described, Mr. Pompeo instead shifted to General Suleimani’s past actions, citing a rocket attack by forces tied to Iran on an Iraqi base that killed a United States civilian contractor.

“So if you’re looking for imminence, you need look no further than the days that led up to the strike that was taken against Suleimani,” Mr. Pompeo said.

As for Mr. Esper, in his own appearance before reporters on Tuesday, he disputed the notion that the confrontation with Iran was detracting from operations against the Islamic State, even though military in the field announced the other day that it was halting such operations to protect themselves from anticipated Iranian reprisals.

“I have gotten no report from the commander saying we have had a material impact on the ability to engage ISIS,” Mr. Esper said.

The broader questions still center on Mr. Trump’s larger plans for the Middle East. He has veered between pulling out and building up, denouncing the disaster of American involvement in the region since Mr. Bush’s invasion of Iraq in 2003 one moment while threatening a new war against Iran if it misbehaved.

He lost his previous defense secretary, Jim Mattis, after abruptly deciding to withdraw forces from Syria, then ended up keeping some troops there anyway. He later stunned America’s Kurdish allies by pulling troops from northern Syria, allowing Turkey to push the Kurds out of the territory. And the last time he authorized a strike against Iran — in retaliation for downing an unmanned American drone — Mr. Trump abruptly called it off with 10 minutes to go.

Even Mr. Trump’s best friends in the region are trying to figure out where he is headed at this point. The president met secretly in the White House on Monday with a top visiting official from Saudi Arabia and talked on the phone with Qatar’s emir, neither conversation disclosed by the White House until reported by the other countries.

Shalom Lipner, a former adviser to seven Israeli prime ministers, said even Prime Minister Benjamin Netanyahu, one of the president’s staunchest allies in the Middle East, had “whiplash” from Mr. Trump’s latest action, having assumed the American president would not take decisive action against Iran this year.

“Everyone is scrambling now to decipher Trump’s intentions,” Mr. Lipner said, “with the fear being that this may have been his parting shot before exiting the region completely and leaving U.S. allies to fend for themselves.”