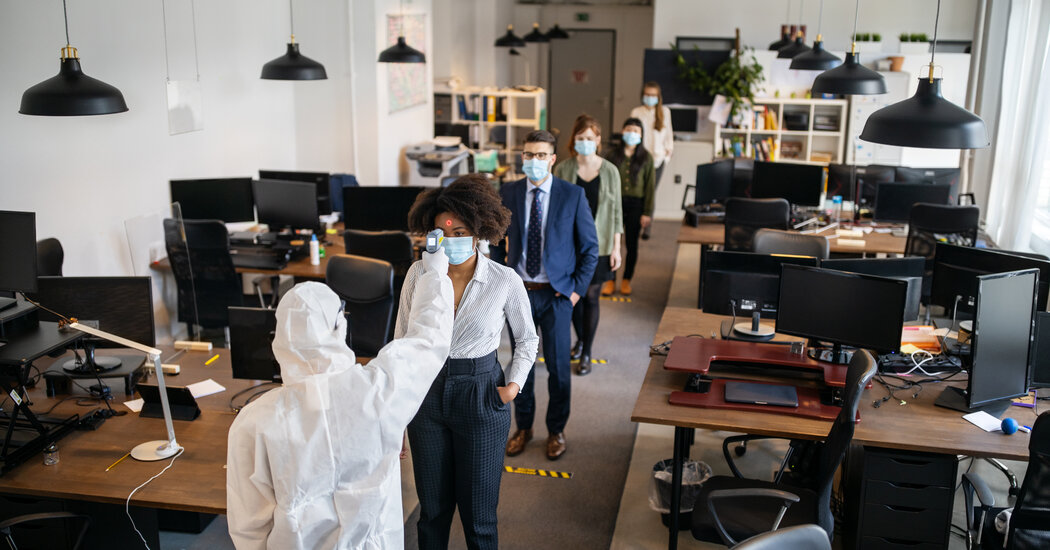 On Friday, the Supreme Court will hear oral arguments about two of the Biden administration’s emergency Covid-19 regulations, including a vaccine or test mandate for large employers and a vaccine requirement for some health workers. At stake in the cases, brought by business groups and Republican-led states, is not only the future of the pandemic but also the federal government’s capacity to respond to continuing and future health threats.

The chief legal question before the court is whether the Occupational Safety and Health Administration, or OSHA, and the Centers for Medicare and Medicaid Services have the authority to issue the vaccine regulations. The answer should be easy. The Biden administration carefully tied the mandates, which include exceptions for people with religious or medical exemptions, to sectors over which the federal government has clear constitutional authority. In addition, Congress granted OSHA and the C.M.S. explicit authority to issue regulations to protect health and safety in their respective spheres. And the ability of vaccines to reduce coronavirus transmission and lessen severe disease is well documented.

Although the legal case for the regulations seems strong, as several appellate courts have found, the government’s victory is not assured. Over the past year, the Supreme Court’s conservative majority has shown little inclination to sustain Covid mitigation measures. Most relevant, in Alabama Association of Realtors v. Department of Health and Human Services, the court struck down the Centers for Disease Control and Prevention’s eviction moratorium, stating, “We expect Congress to speak clearly when authorizing an agency to exert powers of ‘vast economic and political significance.’”

Several lower courts have cited that opinion to block vaccine mandates. Judges who have done so have tossed aside the plain text of the underlying statutes and disregarded the severity of the pandemic, ruling that vaccine mandates require specific statutory authorizations. In justifying this approach, they have voiced concerns about the scope of federal power and its potential impact on individual liberty.

For example, in November the Court of Appeals for the Fifth Circuit called the mandates’ constitutionality “dubious” and questioned whether even Congress could impose them. In other words, although the mandates are clearly permissible under long-settled law, these judges are unhappy with that law and with the fact that the federal government plays an active role in protecting health and safety.

These judges seem to yearn for a smaller federal government — and probably smaller state governments too — and believe that judges should rewrite statutes to make that vision a reality. Lest there be any doubt about the subtext, consider how Judge Terry Doughty (a Trump appointee) began his opinion enjoining the federal vaccine mandate that applied to Head Start early-education programs: “In the immortal words of President Ronald Reagan, the nine most terrifying words in the English language are, ‘I’m from the government and I’m here to help.’” That particular mandate is not before the Supreme Court, but the question of whether those views should guide how judges approach health statutes is.

If the Supreme Court adopts a similar view, the results could be disastrous.

History has repeatedly shown that many of the country’s most pressing health problems, from pollution to pandemics, cross state lines and cannot be addressed by states alone. States also lack the resources to respond adequately to natural disasters or finance the rapid development and distribution of new vaccines. Indeed, when crises hit, the public, even in Republican-led states, usually looks to Washington. Sometimes that requires congressional action. But it is unrealistic to expect Congress, even when it functions well, to pass legislation in response to every new health issue or to foresee every regulation that might be required. Administrative agencies, like the C.M.S. and the Food and Drug Administration, have developed for a reason. Without them the government cannot deliver the services and protection that Americans rely upon.

That should not deter courts from reviewing agency actions to ensure that they respect constitutional rights. It does mean that courts should not impose impractical demands to make it harder for the federal government to protect health.

Perhaps, in our pandemic weariness, people no longer want a federal government capable of providing even a modest degree of public health protection. Indeed, many Americans understandably want to wish the pandemic away. Perhaps they are also done with regulations that curb pollution, ensure drugs are safe and effective, and lower the risk of infections in places like nursing homes. But maybe not. In either case, the desire by some justices for a smaller federal government that is less able to protect public health should not influence their ruling.

Wendy Parmet is a professor of law and the faculty co-director of the Center for Health Policy and Law at the Northeastern University School of Law. She is also author of the forthcoming book, “Constitutional Contagion: How Constitutional Law is Killing Us.”