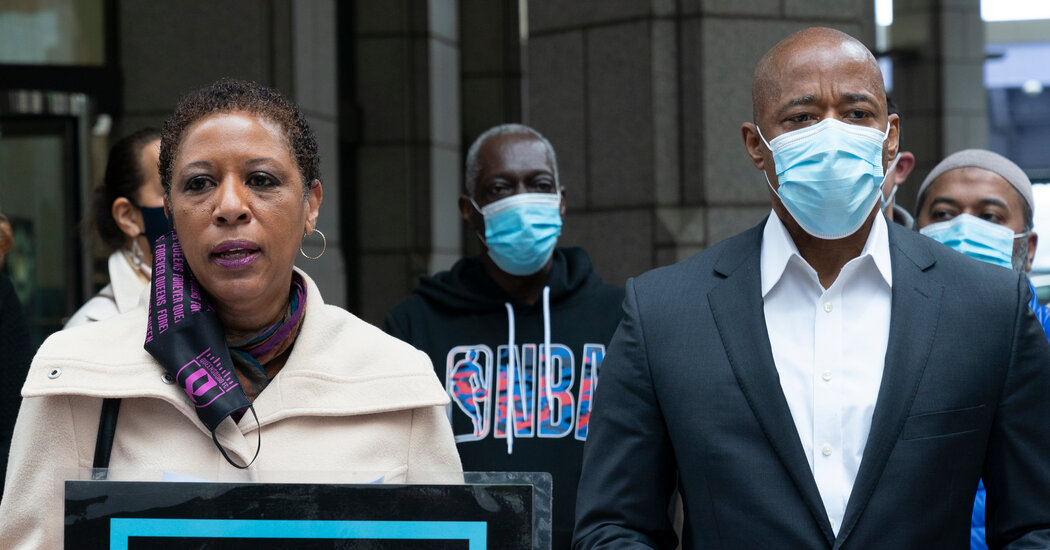 In an early political setback for Eric Adams, Adrienne Adams emerged from a hard-fought race with the votes she needed to be council speaker.

The race for New York City Council speaker, the second-most powerful government post in the nation’s largest city, ended Friday with Adrienne Adams, a member from Queens, securing the votes needed from her colleagues to win the job, and Mayor-elect Eric Adams’s blessing as well.

Ms. Adams said that 32 fellow members of the incoming Council had agreed to choose her as the body’s next leader, well above the 26 she needed.

The resolution of what was a complex campaign of insider jockeying came a few days after four of the candidates who had been vying for the job threw their support to Ms. Adams, who declared herself victorious, only to have her main challenger, Francisco Moya of Queens, assert that he had won the race.

“I am honored to have earned the support and the trust of my colleagues to be their speaker,” Ms. Adams said in a statement on Friday. “Our coalition reflects the best of our city. We are ready to come together to solve the enormous challenges we face.”

Mr. Moya conceded to his fellow Democrat on Friday, saying in a statement that “it is clear that I do not have a path to victory” and calling Ms. Adams a “dedicated and thoughtful leader” who he expected would work well with all Council members.

Ms. Adams is now virtually assured of becoming the first Black woman to lead the City Council. As speaker, she will help set the city’s agenda and negotiate with Mr. Adams over a municipal budget that, at $100 billion, is larger than those of all but a few states. A formal vote installing her as speaker will be held in January after the incoming City Council is sworn in.

Mr. Adams had publicly vowed to stay out of the race. But he and his allies had made it clear in private conversations meant to build support for Mr. Moya that they preferred him for the job. In backing Mr. Moya, Mr. Adams expended valuable political capital and risked putting himself at odds with key members of the coalition that helped elect him, making Ms. Adams’s victory a notable political setback for the incoming mayor.

Mr. Adams was nonetheless quick to congratulate Ms. Adams, calling her “the best choice to lead our City Council forward” a day after he had spoken warmly about her while emphasizing that he believed that they could work together effectively.

The acrimony spilled into public view when The New York Post published an article featuring anonymous criticism of Representative Gregory Meeks, the Queens Democratic leader, for aligning with “anti-Israel socialists” to support Ms. Adams. Mr. Meeks, the chairman of the House Foreign Relations Committee, is a longtime supporter of Israel and has had strong disagreements with democratic socialists in his party.

Ms. Adams and Mr. Adams, a relatively centrist Democrat, are seen as being largely in sync ideologically. Ms. Adams endorsed Mr. Adams in the Democratic primary, and the two, who are not related, were classmates at Bayside High School in Queens.

“Not only did Adrienne Adams endorse me, she voted against defund the police,” Mr. Adams said on Thursday, referring to the movement to cut the Police Department’s budget. The incoming mayor has made reducing crime a top priority, and he opposes efforts to make such cuts.

Mr. Moya lacked organic support among Council members, while Ms. Adams assembled a powerful and diverse coalition that encompassed labor groups, left-leaning members and other members of the Bronx and Queens Democratic parties in particular.

“She is an outer-borough person who has these issues similar to mine: the transit deserts, the outer-borough struggle for recognition, for the disparities we have,” said Marjorie Velázquez, an incoming Council member from the Bronx.

The new City Council will be the most diverse in the city’s history, with people of color and women in the majority. Many members had called for a woman of color to be the next leader. Supporters of Mr. Moya had cited the fact that none of the city’s top elected offices are held by Latinos, an issue that Mr. Adams will continue to face scrutiny over as he fills out his administration.