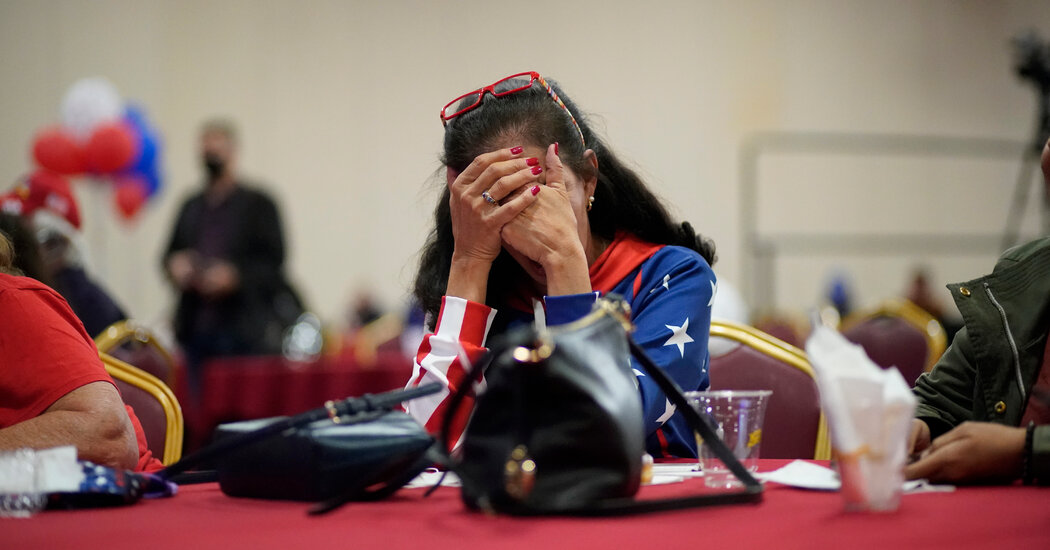 OK, perhaps not exactly what you were hoping for.

Election night wasn’t a real thriller for a whole lot of people, and now it looks as if we’re going to be counting votes for … quite a while. Will everybody still be talking about it at Thanksgiving dinner? If so, be careful not to invite your cousin in Pennsylvania who forgot to vote.

The postelection fog was so thick that we occasionally lost track of some details — like, say, who was winning. Never did get a final word, but Joe Biden certainly seems to be doing better when it comes to little details like getting the most votes. Donald Trump, who you can feel free to refer to as “the long-shot contender,” has responded exactly the way you’d expect — declaring victory while waving around lawsuits.

“This is a fraud on the American public. This is an embarrassment to our country,” said the man who is definitely an expert in being fraudulent and embarrassing.

All this leaves us with two questions, one practical and one cosmic.

The cosmic one has been with us for four years now — how the hell could American voters have picked Trump to be president to begin with? And how, after four years of his Fib-a-Minute administration, could they have come even remotely close to re-electing him?

Excellent query, and I am happy to say that answering it will require us to go back to the early 1800s, when average Americans — OK, average American white males — got the right to vote. Popular elections took over from the rule of the elite property owners. The new voters, many of them in very small rural towns, led lives that were isolated and pretty darned boring.

Then in came politics! Newspapers, taking advantage of the expanding postal system, took the side of one party or another, with the strong expectation that editorial support would lead to advertising patronage. Political wheeler-dealers wooed voters with parades, dances and quite a bit of alcohol. The presidential contenders tended to be heavily along the war-hero line, and the drunken, parading, flag-waving elections were the closest thing many people had to entertainment.

Now, in a way, we’ve gone back — we’re watching elections work themselves out through a world of howling social media. It’s naturally chaotic, sometimes engrossing and occasionally — all right, often — horrifying. The voting process no longer necessarily involves a lot of drinking, though on nights like Tuesday, much of the citizenry may well have had to make up for lost time. (Keen-eyed observers have also noted that Tuesday featured a whole lot of election victories for legalizing drugs of many different kinds.)

The entertainment quotient is the key reason we have Trump in the White House in the first place. We’ve had racist, sexist presidents before, presidents with no real experience in government, presidents who struck associates as meanspirited, presidents whose personal finances were extremely messed up. But all at once is a lot.

And it’s sure not his analytic powers. Trump’s deconstruction of the evils of mail-in ballots has been the latest example of the depth of his thinking. (“It would be very, very proper and very nice if a winner were declared on Nov. 3, instead of counting ballots for two weeks, which is totally inappropriate, and I don’t believe that that’s by our laws.”)

After that cry last week for quick public election results came an announcement Wednesday from Trump’s campaign that it was going to demand a recount in Wisconsin. Not comparable at all! But Trump’s campaign manager complained about “irregularities,” and you know how much trouble those irregularities are.

The president himself claimed a “major fraud” had been perpetrated on the nation in the form of a Trump defeat. So, he said, “we’ll be going to the U.S. Supreme Court.” You remember the Supreme Court?

Trump doesn’t seem to have considered that if the vote-counting was stopped, among the disenfranchised citizens would be a lot of folks in the military who mailed in their ballots toward the end of the legal time period. And why not? Letting our soldiers vote is all well and good, but not if it gets in the way of a party.

“We were getting ready for a big celebration,” Trump complained on election night. “We were winning everything, and all of a sudden it was just called off.”

I hate it when victory celebrations are canceled due to vote-counting. The party was going to be vintage Trump — in the White House, short on masks, short on charm and short on social distancing.

Instead, he was stuck sending out letters to supporters along classic Trumpian lines, writing that he was “WINNING like no one thought possible right now,” but that “THE DEMOCRATS WILL TRY TO STEAL THIS ELECTION.” A fate that could apparently be avoided with the help of a $5 donation.

Meanwhile — what ever happened to Joe Biden? Is he gonna be president or something?

“I’m not here to declare we have won,” he said in an afternoon press conference on Wednesday. It was vintage Biden — he opened up with the promise of not saying anything exciting, then followed through.

He did, mention, however, that he thought he was “winning enough.” Works for me.