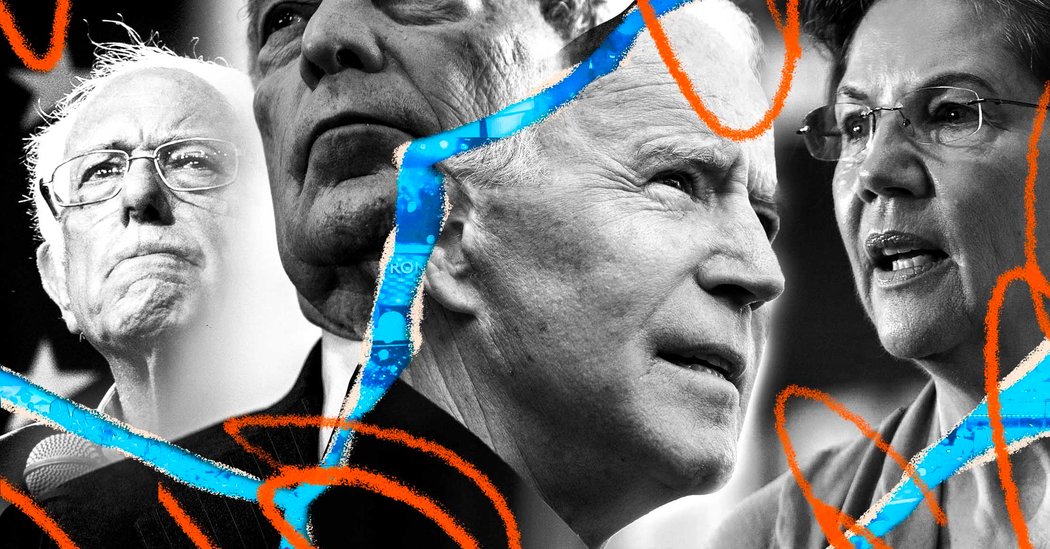 On Tuesday, millions of voters in 14 states and American Samoa headed to the polls in what may prove to be the most important day in the Democratic presidential primary. But what happens if voters remain split among four contenders tomorrow? It’s possible — perhaps even likely — that none of them will win a majority of the 3,979 pledged delegates needed to clinch the nomination on the first ballot.

That could trigger a contested convention in July, a potentially chaotic and caustic process that Democrats haven’t had to undertake since 1952 and that some fear could pave the way to President Trump’s re-election. How would a contested convention work, what would it mean for the party, and can it be avoided? Here’s what people are saying.

‘Would rip the party apart’

If no candidate manages to get 1,991 delegate votes (no, not 1,990) on the first ballot, the convention would become contested, as my colleague Matt Stevens has explained.

If Bernie Sanders wins a plurality, many fear that a contested convention could be disastrous. Although Mr. Sanders’s team helped draft the current rules that require a majority of pledged delegates on the first ballot to win the nomination, he recently asserted that a candidate should be able to win with only a plurality.

From Mr. Sanders’s perspective, his new stance makes political sense: Last week, The Times’s Lisa Lerer and Reid J. Epstein reported that Democratic leaders were so opposed to Mr. Sanders that they were “willing to risk intraparty damage” to stop him. In interviews with dozens of party officials, including 93 superdelegates, they found “overwhelming opposition to handing Mr. Sanders the nomination” if he fell short of a majority.

So what would happen in such a scenario? Charles Blow, a Times columnist, tweeted:

“The risk of some ‘we must save the party from Bernie’ brokered convention move is not just losing this election (although they will lose this election) it’s having an entire generation walk away and not vote again,” Brandy Jensen, an editor at The Outline, tweeted.

But if an establishment-friendly candidate ends up with a plurality, a second ballot may not look so bad, argues Ed Kilgore at New York magazine. If Joe Biden, for example, were to come out ahead of Mr. Sanders in the pledged delegate count, the superdelegates could hand him a majority with comparatively little backlash.

“Bernie has to lose the nomination to a moderate Democrat, but he has to lose fair and square,” the Times columnist Thomas Friedman argues. “The nomination can’t be stolen from him. He and his supporters are too important to a winning Democratic coalition in November. They need to be on the team.”

The threat of a contested convention may actually help to avoid it, Eric Levitz writes at New York magazine. Faced with the prospect of an internecine conflict, he says, Democratic voters might end up rallying behind a candidate, just as Republicans coalesced around Donald Trump in 2016 when the same threat loomed over their party. If moderate Democrats can coordinate well enough to present Democratic voters with a clear choice between Mr. Sanders and Mr. Biden, Mr. Levitz says, they might be able to deliver Mr. Biden a majority. “But if the only choice they can offer is one between Bernie Sanders and a contested convention,” he says, “there is every reason to believe Democratic voters will unite behind their socialist standard-bearer before delegates descend on Milwaukee.”

‘A contested convention would be a good thing’

Contested conventions should actually be more common, Hans Noel, an associate professor of government at Georgetown University, argues in The Washington Post. The convention could behave like a legislature, he says, with representatives, allocated in rough proportion to voter preferences, expressing the will of the people in their selection of a candidate. Such a system, he argues, would produce more democratic outcomes than the current one, which gives outsize influence to early states.

“With a contested convention, Americans could watch the important decisions about candidates being made on television by representatives from all the states,” he writes. “Currently, they watch choices made by the citizens of Iowa and New Hampshire. Which one sounds more democratic?”

‘The solution is straightforward: ranked-choice voting’

Contested conventions could be avoided with ranked-choice voting, Rob Richie, the president and chief executive of FairVote, argues in The Washington Post.

In this Democratic primary season, four states are already employing ranked-choice voting, Mr. Richie notes, and he believes others should follow suit in future years. “Both parties want nominees who reflect the preferences of their voters and give them the best chance to win in November,” he writes. “Much of the talk about ‘electability’ is hot air. Ranked-choice voting, however, offers the best way for primary voters to crowdsource the answer.”

For now, the Democratic National Committee should allow delegates to use ranked-choice voting at the convention, Mr. Richie and David Daley, a senior fellow at FairVote, write at Salon: “Let the delegates that were elected determine the majority winner. The Democratic nominee will be the candidate that elected delegates can agree on. It might be Sanders (who in head-to-head polls right now handily defeats Bloomberg) or someone else. But that candidate will be more electable because that candidate will have earned a majority.”

MORE ON THE ROAD TO THE CONVENTION

“How to Win the Democratic Nomination, and Why It Could Get Complicated” [The New York Times]

“How Likely Is a Contested Convention, Really?” [New York]

“How a Contested Democratic Convention Would Work” [The Washington Post]

Here’s what readers had to say about the last debate: How bad will the coronavirus outbreak get?

Cathy from New York: “It is hard to face the concept of global pandemic with ‘wash your hands’ and buy an extra bottle of necessary medications. … Some of us will get sick, and some very sick. The disruption in the supply chain for medical supplies is as dangerous as the failure of our government to have pandemic plans in place.”

Liz from California (via email): “I live in California and am part of the nationwide effort to conduct the U.S. census. A lot of preparation has gone into hiring thousands and thousands of people … and it looks like this count will be happening from March 30 through May. Absolutely the worst timing because of this virus that will be entering our country.”