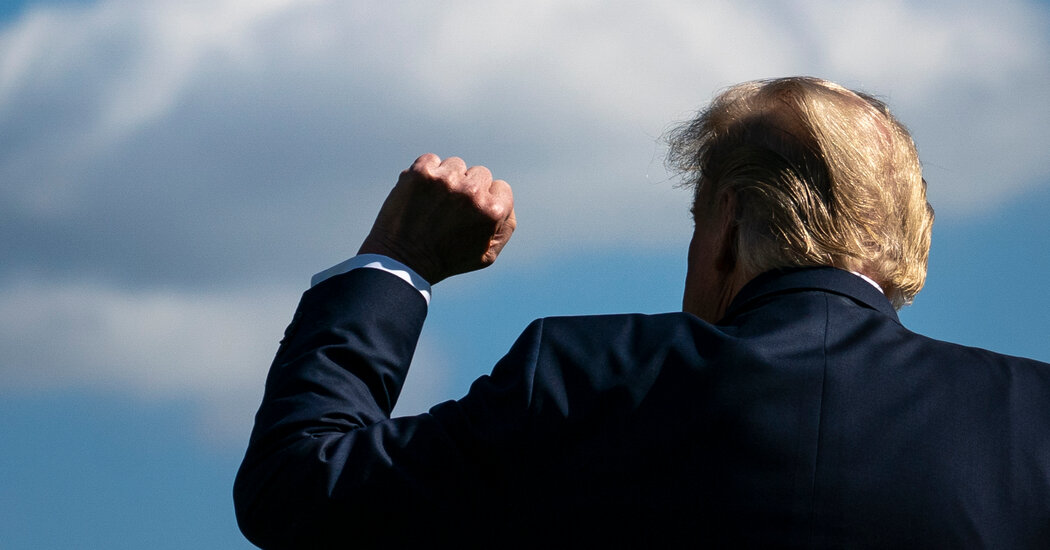 I’m 73 years old. I have been hunkered down in our apartment since March. I am nervous about contracting Covid-19. Yet my husband and I will vote early and in person.

Going to vote has never ever felt scary to me, but this year it surely does. At the debate President Trump told his supporters to be poll watchers. Does that mean that when I go vote, there will be Trump supporters jeering at me? He tells a violent right-wing terrorist group to “stand back and stand by.” Stand by for what, exactly? Will our country have armed men roaming the streets when Mr. Trump loses?

These aren’t fantastical fears. They are based on the reality of who Mr. Trump is. He doesn’t joke. He is completely serious when he says that should he lose, it means the election is rigged.

These next months are going to be simply awful. Lives will be lost. We can be sure of that.

Re “G.O.P. Distressed by Failure to Disavow a Racist Group” (front page, Oct. 1):

President Trump and all of his minions are trying to reframe, revise or wish away his failure to condemn white supremacists. I’m reminded of a maxim about communication that many years in the ad business revealed to be true: “It’s not what you say, it’s what they hear that matters most.”

In less than 24 hours, there were Proud Boys T-shirts, buttons and stickers emblazoned with their logo and the president’s exact words, “Stand back” and “Stand by.” That tells you exactly what they heard: validation, encouragement and thanks for their support. A terrifying message indeed.

Re “Who Won the Presidential Debate? Political Observers Weigh In” (nytimes.com, Sept. 30):

You talk about the danger, and then you carry on as if this were just another presidential debate with a winner and a second best. Well, it’s not that. It hasn’t been that for a very long time.

Here in Canada I’ve got a front-row seat I wish I didn’t have. You all have way too much faith in the mantra “We’ll get through this the way we’ve gotten through …”

You haven’t “gotten through” anything like what threatens you now, and you won’t. Not unless you face what you’re facing, and time is almost up on that.

It’s the eighth day of the week, people. The old rules are dead. Nothing is what it was. Will you please stop pretending?

The president insulted every family in America affected by addiction when he sought to put down Joe Biden by pointing to his recovering son’s history of struggles with drugs. It was a vile attack that perpetuates the extremely problematic narrative that addiction ought to inspire shame not only in the individuals struggling with it, but in their families as well.

The irony is that Mr. Trump lost a brother, Fred Jr., to alcoholism at the young age of 43. If he had any decency he would know better than to make such thoughtless comments.

I, like Joe Biden, am proud of all of my friends and family who are in recovery.

Gail Collins quotes from President Trump’s challenge to Joe Biden’s intelligence in the first “debate,” beginning with: “Did you use the word smart?”

But if the president really is a “very stable genius,” why did Michael Cohen say Mr. Trump ordered him to write to Mr. Trump’s high schools, colleges and the College Board, threatening them with legal action and jail time if they ever released his academic records?

And, if Mr. Trump really built “a company that’s worth more than $10 billion,” as he bragged during the 2016 campaign, why won’t he proudly release his income tax returns?

I’m guessing he’s not as smart or as rich as he says he is.

Sorry, contrary to your plea not to ignore the coming debates, I do not propose to subject myself to an hour and a half of screeching nonsense again. I have my ballot and will carefully fill it in for Joe Biden. There’s nothing more I need to know. In any event, President Trump ensured that no one could learn anything from the debates — except that he’s a bully and, to use his word, a fake. Why let him fill my tired ear with his serial mendacity?

On the two days after the “debate,” there were few mentions of the bigger story regarding President Trump’s taxes and debts. Another masterful distraction, and the media fell for it!