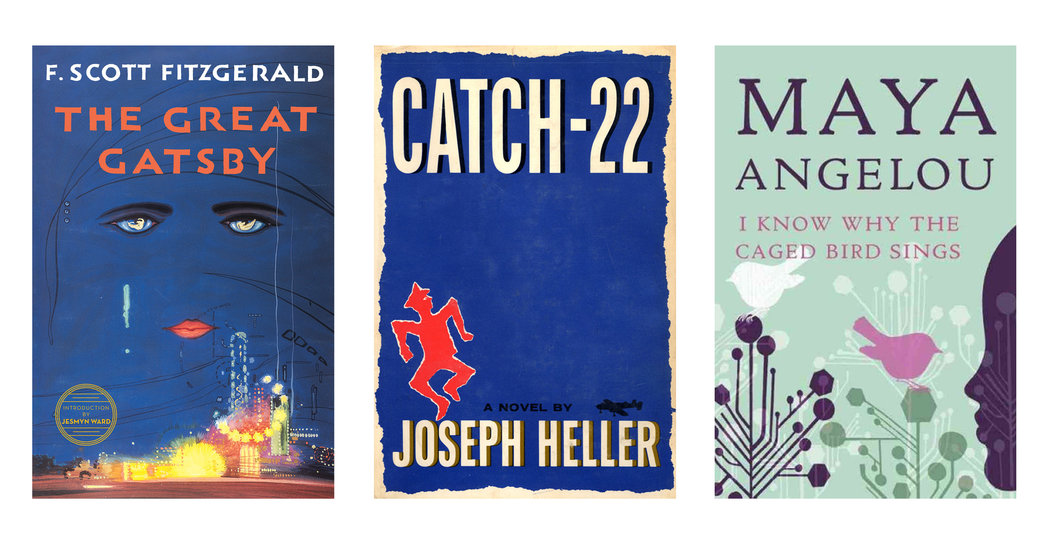 An Alaska school board voted last week to remove five books, including classic American works like “I Know Why the Caged Bird Sings” and “The Great Gatsby,” from its curriculum for high school English electives because of sexual references, graphic language and other concerns.

A list of books deemed too controversial to be taught in electives including poetry, journalism, creative writing and American literature was presented at a Matanuska-Susitna Borough School District board meeting on April 22. The list cited “sexually explicit material” and “‘anti-white’ messaging” in “I Know Why the Caged Bird Sings,” Maya Angelou’s seminal memoir, and raised concerns about language and sexual references in “The Great Gatsby,” the landmark 1925 novel by F. Scott Fitzgerald.

The other books on the list — “Invisible Man” by Ralph Ellison, “Catch-22” by Joseph Heller and “The Things They Carried” by Tim O’Brien — were judged to be inappropriate because they contained mentions of rape, incest, racial slurs, profanity and misogyny.

The district, which is based in Palmer, about 40 miles northeast of Anchorage, has an enrollment of more than 19,000 students from kindergarten through 12th grade and is the second-largest school district in Alaska.

Before the board members voted, 5 to 2, in favor of removing the books, Sarah Welton, the board’s clerk, said at the meeting that she noticed a lot of her students lacked critical thinking skills and that removing the books could be a “disservice” to them.

“To me, the need for controversial subjects is part of education,” Ms. Welton said in a statement on Wednesday. “The societal issues brought forth in all of the books reflect the continued need for people to learn about experiences other than their own. Protecting students by hiding the issues or ignoring the issues does not help or prepare students for the world they inherit.”

In arguing against the books, Jim Hart, a board vice president, referred to a chapter in “I Know Why the Caged Bird Sings” that describes molestation in “graphic terms.”

“When you have books you could not read publicly without going to E.O., that’s probably a pretty good litmus test,” he said.

Jeff Taylor, a board member who also voted in favor of removing the books, emphasized in a statement on Facebook that the works had not been banned.

“They are on bookshelves, they are in teachers’ libraries, they are available and could be recognized and recommended as great literary works,” he wrote. “They could be discussed and written about. They are not banned.”

He said he voted to remove the books from the reading list to give parents more “freedom, control and involvement” in what their children read and to “give parents responsibility in the formation of their student’s thoughts and knowledge.”

According to Jillian Morrissey, a spokeswoman for the school district, the course material for the English electives went through a review process this school year that included a stakeholder survey; a community survey; and consideration by a council of teachers, librarians and administrators.

“When this was complete,” she said in a statement on Wednesday, the “administration brought forward a recommendation for the course material to the board.”

The American Library Association sent a letter to Monica Goyette, the district’s superintendent, and the board on Wednesday expressing concerns over the board’s vote.

Every community has a variety of opinions on what constitutes an appropriate curriculum for high schools students, the association said, and for every person who objects to an assigned book, there will be others in favor.

“For this reason, the school district should rely upon the professional judgment of its teachers and educators who have read and studied about literature and pedagogy to determine what books best meet the educational mission of the school district and the needs of the students,” it said.

Mr. Hart, Mr. Taylor and Ms. Goyette did not respond to requests for comment on Wednesday.

Since the board’s vote, DanaLyn Dalrymple, a local lawyer who has a son in high school, has created a “book challenge” that encourages high school students in the district to read the five books by Aug. 9.

Ellis Barnett, a saleswoman at Fireside Books, a bookstore in Palmer, said on Wednesday that Fireside had sold out of all five titles and had received hundreds of orders for more.

“Obviously there was a lot of outrage online when we saw the books were removed from the curriculum,” Ms. Dalrymple said on Wednesday. “Everybody knows these books were fundamental reading; they should be required reading.”

She plans to offer multiple $100 prizes to students who participate in the “Mat-Su Valley Banned Book Challenge.”

So far, about 35 students have agreed to participate, Ms. Dalrymple said, and more may sign up when school officially ends. She said she was also working on getting extra copies of the books and creating a way to safely share them in the time of Covid-19.

“I just really wanted to motivate” students, Ms. Dalrymple said, and “incentivize them to look at these books that really should be required reading, not removed from the curriculum.”