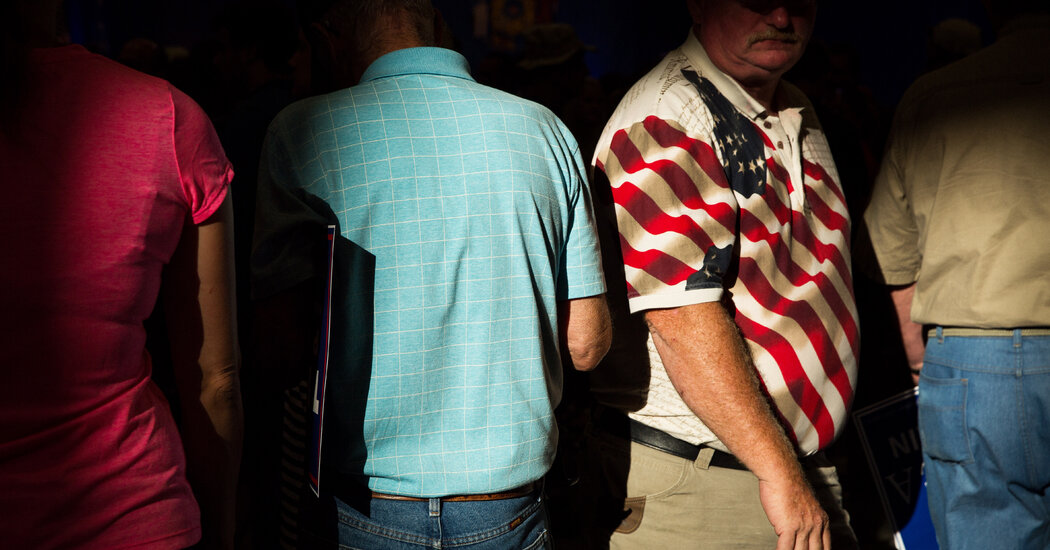 I went to see my doctor the other day for a Covid-delayed physical. Instead of talking about what ails me, he wanted to talk about what ails us. A dystopian country. The Babel of misinformation. The lack of trust in everybody and everything.

“And how did Dr. Fauci become the enemy?” he said. My doctor is politically moderate and ambidextrously smart. After much steam had been let off, I wanted to say, Enough with American vitals — what about my own?

Trust in institutions — government, the press, religion, big business — is at or near record lows. My own profession, journalism, has been kicked to the cellar of disdain. Almost 40 percent of Americans have little or no confidence in newspapers, according to Gallup’s annual surveys — up from 24 percent in 2000.

But the “press,” where free speech and all its cacophonous chaos reside, has been a punching bag for some time. More shocking is that about 50 percent distrust our electoral system, according to a Morning Consult survey. Diminished confidence in elections is among the worst of the many awful legacies of Donald Trump.

But underlying these cynicisms and suspicions is a truly sad development: The United States is becoming a mean country.

Take the story of the airline passenger who knocked out the teeth of a flight attendant — part of a frightening rise in unruly fliers. Or consider the man who shot and killed a Georgia supermarket cashier when she asked him to pull up his mask. Lament the absurd sorrow of the Philadelphia food festival that was designed to celebrate culinary diversity — then canceled after the decision to disinvite a food truck selling Israeli food sparked controversy.

It was a truly shocking breach when Representative Joe Wilson, Republican of South Carolina, shouted “You lie!” at President Barack Obama in 2009. Now an entire political party is shouting the Big Lie of election fraud, and will punish those who insist on the truth.

Tribalism, and the corrosive hatreds that go with it, has always been just below the surface in the risky experiment of our multiethnic democracy. Of late, it has surfaced in many of our daily interactions — and accounts for much of the meanness of this moment.

I trace the contempt of the press to Rush Limbaugh, whose longstanding goal was to equate what he called the “drive-by media” — that is, fact-checking news organizations staffed by underpaid people devoted to their craft — with fact-challenged, overcompensated, partisan gasbags like himself. It worked.

Once upon a time, the crackpots could mostly talk only to themselves on barstools; now they have an enormous community in the dark reaches of the web. That explains why up to one-fourth of Republicans believe the country is under the control of Satan-worshiping pedophiles, as they huff the vapors of QAnon. It’s also the likely reason a third of Americans continue to believe the fiction that Joe Biden took the election through fraud.

Sadly, the Jan. 6 attack on the Capitol — so heartbreaking and so norm-shattering — was much more of a reflection of the times than an aberration.

The left shares the blame, with its cancel culture, groupthink stridency and identity politics — tactics now picked up by the right. (See the canceled Liz Cheney, party fealty to the falsity that Trump won.)

Last summer, some protesters showed up at the homes of elected officials in Seattle, including that of Debora Juarez, a solid progressive and the lone Indigenous member of the Seattle City Council. She said she felt they were there to “terrorize” her after she was taunted with bullhorn insults and menaced with flashing car headlights. Her crime: Ms. Juarez failed to back a goal to defund the police by 50 percent. The political class in the city was largely quiet.

I’ve been working on a book about the Ku Klux Klan in the 1920s, a time when up to five million Americans belonged to the nation’s oldest hate group. That was a mean decade, with Jim Crow locked in place, Prohibition the law of the land and immigrants who weren’t white Protestants all but locked out.

A favorite tactic of the Klan in the ’20s was night-riding to people’s homes to terrorize them.

The underlying theme of all this meanness is intolerance.

My own better angel, currently on hiatus, tells me that the majority of people today aren’t as awful as they appear on social media, which rewards hate at a high volume. But who, or what, rewards civility and nuance?

It may be, as the writer George Packer says, that the United States is headed for “a cold civil war that continues to erode democracy.” No nation can survive for long as a lodestar without some self-evident truths.

There’s an old saying, attributed to the Sioux: A people without history is like wind on the buffalo grass. What may be worse are a people without a heart, unable to see half their countrymen and countrywomen as anything but the enemy.