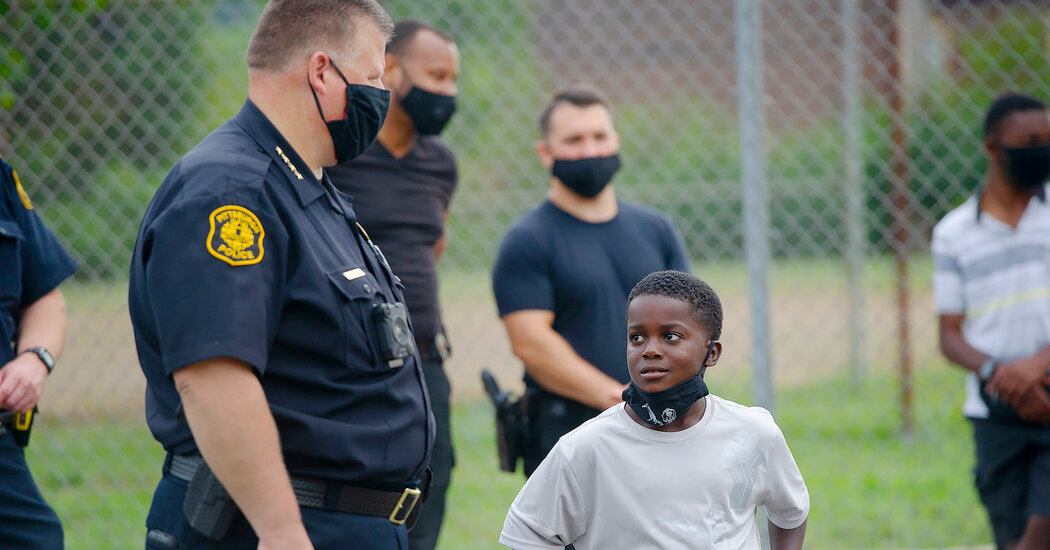 Even as a pandemic and the resulting economic crisis occupy much of the news, President Trump and Joe Biden often talk about something else: crime and justice. Specifically, they are talking about policing and safety, while offering sharply competing visions of America.

Yet a survey reveals that Americans are not as divided on issues related to policing and law and order as you might think. Far from it.

So why has this become such a big political fault line heading to the election on Nov. 3?

The Democracy Fund + U.C.L.A. Nationscape Project collected data on more than 10,000 people between July 16 and 27, asking them several policy questions about policing, among other things. Nationscape interviews are conducted online with a sample provided by Lucid, and are adjusted to be representative of the nation as a whole.

Nearly 75 percent of survey respondents with a view on the matter want to maintain police funding. Similarly, most people (66 percent) who have formed an opinion on the subject don’t want to decrease the size of the police force or the scope of their work.

Americans are also overwhelmingly in favor of changes to police conduct like the elimination of the use of practices that restrict breathing, sometimes referred to as chokeholds. Nearly 80 percent of those with an opinion want to ban the use of this method.

In a time of deep partisan divide, these sentiments transcend party. Among people with a view, most Republicans (86 percent), independents (76 percent) and Democrats (61 percent) want to maintain funding for the police. Similarly, there is widespread support among those with opinions for banning chokeholds (89 percent of Democrats, 81 percent of independents and 63 percent of Republicans).

The difference in how the two candidates are talking about the issue reflects the differences among Republicans and Democrats on what should come first. And public sentiment may reflect in part what the candidates are choosing to emphasize on the campaign trail.

Sign up for On Politics to get the latest election and politics news and insights.

Mr. Trump, perhaps hoping to take the focus off his handling of the pandemic, has said the safety of suburbia would be threatened if Mr. Biden were elected. Mr. Biden has countered that Mr. Trump is a “toxic presence” who encourages violence and chaos in our communities. This continues Mr. Trump’s 2016 campaign strategy of focusing on identity issues, so it comes as no surprise that people feel passionately about this topic.

To assess people’s priorities separately from their opinions about policy, we used what researchers call conjoint experiments. We started with a list of 32 policies that politicians are discussing. It included things like possibly providing people with direct cash payments to offset losses from Covid-19; giving tax cuts to low-income families; banning abortions; or building a wall on the border with Mexico.

Each person who takes the survey sees two randomly selected collections of up to four policy positions. Sometimes the positions are in favor of the policy — banning chokeholds, for example — and sometimes they are in opposition to it. We ask people to choose which collection of policy outcomes they prefer. If an item repeatedly makes people choose one set over the other, regardless of other things in the set, it is revealed to be important to people’s choices. When repeated over tens of thousands of survey respondents, the data show which policy positions Americans care about most.

When we first reported on people’s priorities in December, whether to impeach the president was among the most important issues to people in both parties, followed by issues like whether to build a border wall or ban guns.

Seven months later, we stopped asking about impeachment, added the police issues, and continued to ask about building a wall on the border and banning guns, among other things. Though issues relating to guns and immigration remained high priorities for people, policing topped the agenda.

Americans are more likely to trade away issues relating to taxes, immigration and health care in order to get policies they want on policing; it leads the list for Democrats and Republicans and is one of the top three priorities for independents.

Though they want to maintain funding on average, Democrats revealed this to be the 13th-most important issue to them, behind things like enacting a path to citizenship for young undocumented immigrants known as Dreamers, universal gun background checks, and a government-guaranteed right to housing. This puts the importance of maintaining police funding near the middle of the 32 issues we asked about for Democrats.

Similarly, despite agreeing that neck restraints should be banned, Republicans prioritize 19 other items ahead of eliminating chokeholds (including not banning guns, building the border wall, providing direct cash payments to offset Covid-19 losses, and not abolishing private health insurance). Banning chokeholds is among the least important things to Republicans relative to the others we asked about.

These differences play into the candidates’ attacks on one another in an important but subtle way. Republican voters agree that chokeholds should be banned, but they don’t care about the ban as much as they care about maintaining the size, scope and funding of police departments. This allows Mr. Biden to suggest that Mr. Trump does not prioritize reforms to dangerous tactics. In June, Mr. Trump signed an executive order encouraging the overhauling of police practices like chokeholds, though not requiring it.

Similarly, Democratic voters generally agree that police departments should not be defunded, but they don’t care about it as much as they care about banning methods that prevent breathing. This allows Mr. Trump to suggest that if elected, Mr. Biden will not prioritize making sure police forces aren’t defunded. Mr. Biden has repeatedly said he does not support defunding the police.

Each candidate is trying to frame the other as a threat to maintaining safety. In July, Mr. Trump released an ad in which a woman calls 911 during a robbery and reaches a recording telling her to “leave a message.” In August, Mr. Biden told a crowd in Pittsburgh that when he was vice president, “violent crime fell 15 percent in this country,” adding that he did it “without chaos and disorder.”

Even when voters and candidates agree on what kind of world they’d like to live in, differences in priorities can foster suspicion and acrimony. Voters want candidates who agree with them. But they also want candidates who will focus on the issues that are most important to them.

Lynn Vavreck, the Marvin Hoffenberg Professor of American Politics and Public Policy at U.C.L.A., is a co-author of “Identity Crisis: The 2016 Presidential Campaign and the Battle for the Meaning of America.” Follow her on Twitter at @vavreck.

Chris Tausanovitch is an associate professor in U.C.L.A.’s political science department. Follow him on Twitter at @ctausanovitch.