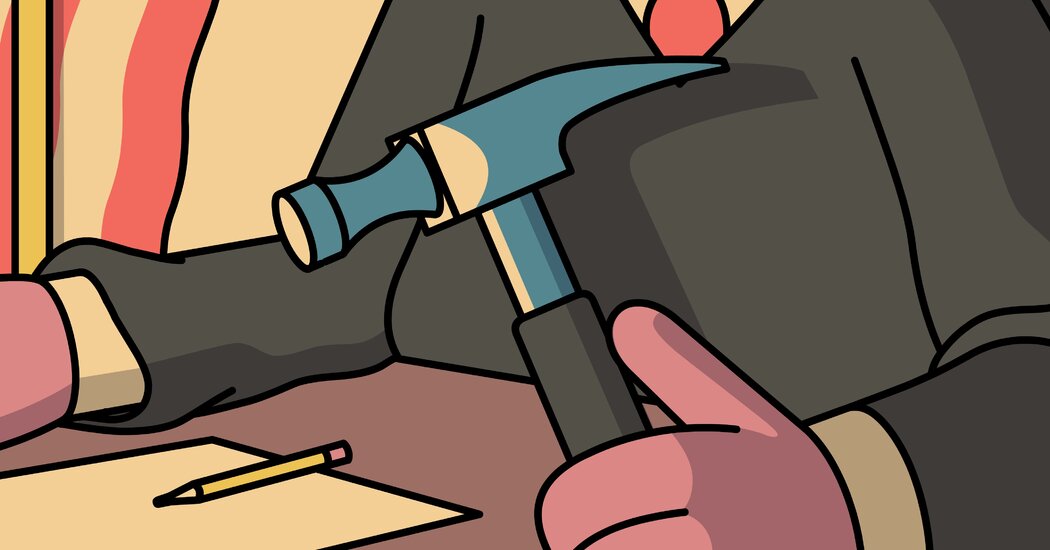 Workers are flexing collective power in major strikes, workplace actions and organizing drives, as they are forced to fight battles that labor won decades earlier: over workplace safety, an eight-hour day, vacation, sick leave, a living wage, health care and retirement security. But even as workers build power and wield it, we are thwarted by laws and judges who reliably side with corporations over workers.

America needs more judges who understand and support the rights of workers. For too long, the courts have sided with corporations over labor, fundamentally and perniciously reshaping American law, life and liberty. Today, they are doing their part to unravel the American dream — and the social contract that has been in place since the 1940s, offering the working class a good life if they spend 40 hours on the job, the means to enjoy it in off hours and a secure retirement.

In one stark example, a judge in Alabama in October barred union mineworkers from picketing within 300 yards of mine entrances, even as the authorities there have failed to charge the drivers of vehicles that struck lawful picketers. In a more common infringement of free speech, a judge in Iowa limited United Auto Workers picket lines outside a John Deere plant in Davenport last month to just four people at each entrance to the plant.

The wholesale theft of workers’ rights is happening in broad daylight.

With the help of conservative judges, corporations have systematically weakened labor laws for decades, leaving workers fewer and fewer tools to hold their bosses accountable. In the rare cases when workers win judgments against a bad boss, employers rarely face more than a slap on the wrist.

This didn’t happen by accident. Republican presidents have stacked the federal courts with judges who hail from elite law schools, white-shoe law firms and corporate boardrooms. (More than a quarter of all federal judges on the bench in January had been appointed by Donald Trump.) As a result, the corporate win rate in American courts is sky-high.

This is especially true in cases heard by the Supreme Court, which has sided with the Chamber of Commerce 70 percent of the time since 2006. A study published in 2013 ranked Chief Justice John Roberts and Justices Samuel Alito and Clarence Thomas among the five most-corporate-friendly members of the court since 1946, and the pro-corporate voting rate of its conservative wing is only growing. According to one recent report, the court agrees with the Chamber of Commerce more now than it had at any other time in recent history.

Two other cases this year vividly demonstrate how the business lobby is using the courts to undermine workers’ rights.

In June, in Cedar Point Nursery v. Hassid, the Supreme Court elevated property rights above the rights of workers, upending a 1975 California law that allowed union organizers to speak with farmworkers in the fields and vineyards. This law had been a seminal accomplishment for the farmworker labor movement led by Cesar Chavez and Dolores Huerta. As if to emphasize the court’s hostility to workers’ rights, Chief Justice Roberts declared that the California law granted union organizers the “right to invade the growers’ property.”

In another case decided in June, Trinity Services Group v. National Labor Relations Board, the U.S. Court of Appeals for the District of Columbia gave employers a free pass to hoodwink their employees into voting against the union as long as they don’t make threats or promises or evoke future consequences.

Because judges have created loopholes and carve-outs in labor law over the years, companies can seek to weaken the collective power of workers by forcing them to attend anti-union “captive audience meetings,” firing workers who organize their colleagues and disseminating propaganda smearing unions, as well as employing other intimidation tactics to keep employees from organizing.

Congress wrote labor laws to foster union organizing and encourage collective bargaining, recognizing that workers are the foundation of our economy, and their collective power can check corporate abuses. Congress is today considering landmark legislation to update outdated, broken (and in some cases overtly racist and sexist) labor laws and give workers a fair chance to organize, bargain and hold employers accountable. But its passage would prove hollow if the courts dismantled it or wouldn’t enforce it.

This isn’t just an academic question, or even an economic one — it’s often a matter of life and death. Before he joined the Supreme Court, Neil Gorsuch, as a judge on the Court of Appeals for the 10th Circuit, voted to allow the firing of an employee who abandoned an unheated company truck in a blizzard to avoid freezing to death. This is just one example of the judicial callousness toward workers that has put our livelihoods and lives in real danger.

President Biden has an important opportunity to appoint judges who have been in the trenches with workers, and who know that strong labor laws and union contracts create workplace protections and rights for workers. By nominating union lawyers and worker advocates, he can help break the cycle of courts undermining our rights to benefit their corporate friends.

Workers have seen progress when presidents appointed judges who had a personal understanding of injustice. Justices like Thurgood Marshall and Ruth Bader Ginsburg devoted their careers as lawyers to arguing for civil and women’s rights and changed our nation for the better from the bench. We’ve had laws to protect workers’ rights for nearly 100 years, but workers have learned that seeking justice in the courts leads all too often to frustration. No workers are immune from having their rights snatched away as long as judges reflexively side with employers.

In this moment of historic economic inequality, the president can take a powerful action to help workers build — and keep — power.

Sara Nelson (@FlyingWithSara) is the president of the Association of Flight Attendants-C.W.A.