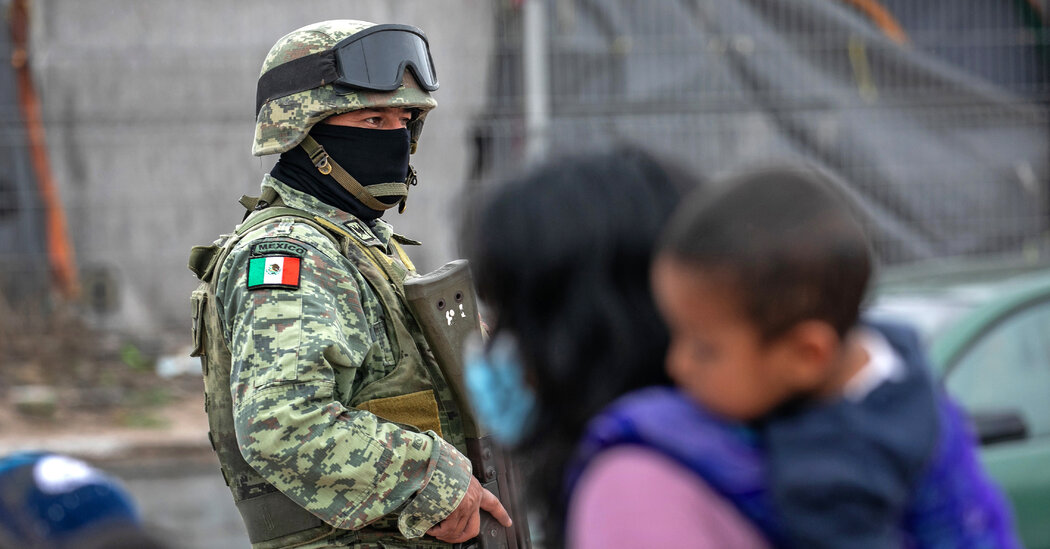 MEXICO CITY — There is no easy way to manage migration from Mexico and Central America. Not during times of economic downturn and especially not during a global pandemic. This is true for both Mexico and the United States. It’s true whether the American administration is a decent and progressive one like that of President Biden or a nativist and reactionary one like that of former President Donald Trump.

The forces pushing or pulling people to leave their homes and migrate north have existed and evolved for decades. The issue has been a nightmare for American presidents to address, which, in turn, implies a horror show for Mexican and Central American governments.

What complicates this conundrum for Mr. Biden is the current reality in Mexico — a far worse one than what Bill Clinton, George W. Bush, Barack Obama and even Mr. Trump had to deal with. Mexico’s president, Andrés Manuel López Obrador, known as AMLO, is mismanaging every facet of his country’s situation, from the pandemic to the economy, the high rates of crime and violence, the deterioration of democratic institutions, and the rule of law and human rights.

The Biden administration, working at cross-purposes with its own agenda and long-term interests in human rights and democracy, has cut a shortsighted deal with Mexico to address the “child crisis” immediately south of the border by stemming migration with the continuation of some of the Trump’s era policies. This was no uncomplicated feat, as it required Mr. Biden to win AMLO’s cooperation, and “cooperating,” in this diplomatic exercise, is often a euphemism for doing America’s dirty work.

In exchange for Mr. López Obrador’s collaboration, Mr. Biden’s government has failed to criticize his growing authoritarianism. That’s disappointing and could spell trouble for Mexico. With a weakened opposition, a terrified judicial branch, a corrupt military (that can be bought off by huge contracts for everything from airports to A.T.M.s), an intimidated elite and a disorganized civil society, the only political element left for AMLO to contain is Washington.

So far, the Biden administration has been reluctant to speak out on bilateral agenda items of legitimate concern like macroeconomic management, renewable energy and the rule of law. U.S. officials fear doing so may offend Mr. López Obrador and undermine his willingness to help address the rising number of children arriving at the border.

In a nutshell, President Biden has sacrificed principle for expediency. He has effectively given Mr. López Obrador a free pass to continue his illiberal rule, a steep price to pay for his cooperation. The approach ties the crisis at the border to the political crisis in Mexico. The only way to change matters is to call Mr. López Obrador out on his abuses, such as threatening electoral authorities, singling out highbrow publications or backing the extension of the Supreme Court chief justice’s term by two years, a move that critics call unconstitutional. Mr. Biden should not allow the short-term mess at the border to eclipse the need for long-term stability in Mexico.

Mr. Biden’s myopic approach, not dissimilar from his predecessor’s, comes amid a surge of migrants from Mexico entering the United States without authorization. It could continue for years. The increase in Mexican male migrants is the real challenge. According to Mexico’s National Population Council, 1.5 million Mexicans migrated to the United States between 2016 and 2020. The number of Mexicans leaving their country primarily to seek jobs north has risen significantly since the middle of last year.

That figure is most likely an underestimate, since many people, single men particularly, make several attempts to cross the border.

This pull to the border for many migrants from Mexico was clear even before Mr. Biden was elected. In 2018, before Mr. López Obrador took office, and the Mexican economy was growing, albeit slowly, the U.S. Customs and Border Protection apprehended about 18,500 migrants from Mexico on average per month. In 2019, the monthly average number of detained migrants from Mexico grew slightly, and their share in total yearly apprehensions decreased, in part because of AMLO’s initial open-arms policy toward Central Americans that began in May. That month, apprehensions of Central Americans skyrocketed to 104,000 from 76,000 in April.

That led Mr. Trump to go ballistic and threaten to slap up to 25 percent tariffs on all goods imported from Mexico. It was enough for Mr. López Obrador to cave, deploy more troops on the country’s southern and northern borders to keep Central Americans from reaching the United States, and accept the shameful Migration Protection Protocol, in which asylum seekers must stay in makeshift camps located in crime-infested border towns, often under unsanitary conditions, to wait for their hearing in Mexico.

Last June, apprehensions of Central American migrants subsequently fell to as few as 3,753. Meanwhile, however, nearly 298,000 migrants from Mexico were detained last year, the highest annual total since 2010. They made up 65 percent of all migrants apprehended at the border. As long as the U.S. and Mexican economies are performing in opposite directions, people will continue moving north for opportunities.

The past may offer insights for what is to come. In the mid 1990s, Mexico’s economy collapsed in the so-called Tequila Crisis, while the United States enjoyed the Clinton boom. It was during this time when undocumented migration from Mexico jumped, with the overall unauthorized population growing from 5.7 million in 1995 to 8.4 million by the early years of this century.

Today Mexico is mired in its worst depression since the 1930s, having contracted more than 8 percent in 2020. Its recovery is expected to be sluggish. Meanwhile, the United States is undergoing a formidable economic recovery, after shrinking a modest 3.5 percent last year.

Who will build America’s new highways and bridges? Who will man the construction sites dotted along its skylines? And who will serve patrons at the myriad restaurants Americans will flock to when they reopen? Many of them will be Mexican migrants.

There is, however, one big difference between the mid-90s and now: AMLO. Corruption may be endemic in Mexico, but his increasingly nationalist, statist, populist and authoritarian stances are beginning to threaten Mexico’s barely 25-year-old democracy by destroying the institutions of transparency and the systems of checks and balances. Even during the corrupt years of Enrique Peña Nieto’s presidency, democratic institutions were respected. We should not judge these developments lightly.

The Mexican government has also been remiss to enforce the United States-Mexico-Canada Agreement, leaving it up to businesses to invoke arbitration clauses if they so wish. American unions and environmentalists are essentially on their own in enforcing the treaty’s provisions for labor rights. Yet AMLO has not met much resistance from most American officials. In Washington, it’s mainly progressive Democratic Congress members who are calling attention to his backsliding into authoritarianism.

Mr. Biden’s reluctance to criticize AMLO’s policies is understandable but misguided. On the contrary, he should make it clear to Mexico that the Faustian bargain Trump struck with AMLO — do as you please, as long as you keep the Central Americans out of the United States — is not acceptable anymore. Mr. Biden must hold Mexico to the same standards he has for other countries like China, Russia and Guatemala. He must collaborate with Mr. López Obrador, but also press him openly on all accounts: climate change, human rights, corruption, the rule of law, democracy and transparency. Taking care of the children at the border is important. So is taking care of Mexico.

Jorge G. Castañeda (@JorgeGCastaneda) is the author of “America Through Foreign Eyes.” He covers Latin American politics and culture and is a professor at New York University.