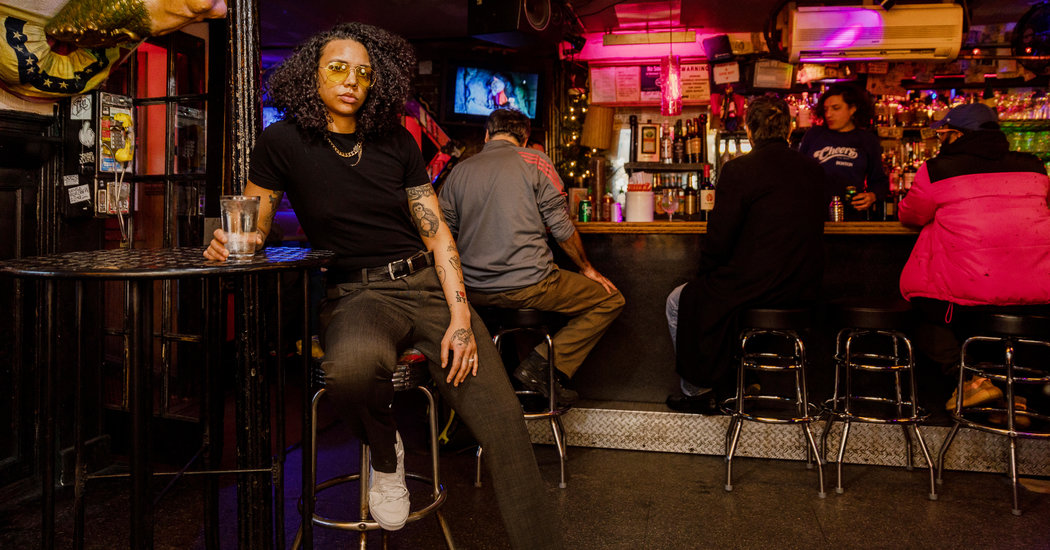 When Jade Golden, a bartender at 169 Bar in Manhattan’s Chinatown, was in Alcoholics Anonymous, her sponsor strongly recommended that she stay out of the bar business.

“The mentality was that if you stay in the barbershop long enough, you’ll end up getting a haircut,” Ms. Golden said. “I don’t believe that. I believe I could grow my hair to my feet standing in a barbershop. I sit down in the chair and tell somebody to cut my hair — that’s how I get a haircut.”

Ms. Golden has been sober for eight years, balancing her personal life with the demands of the field in which she works. Like other sober bartenders, who have long been a presence in the industry, she isn’t just hanging around the shop; she’s the barber.

Interest in going dry, or drinking less, has been on the rise broadly in recent years. Semi-sobriety is no longer confined to Dry January (or Drynuary), the monthlong challenge that rose to popularity five years ago, and the “sober curious” movement is giving people who don’t necessarily identify as having a drinking problem a framework for abstaining.

Within the beverage industry, low-alcohol and nonalcoholic beverages are gaining popularity. Retail sales of nonalcoholic beverages have grown by $3.2 billion, to $87.2 billion, in the last year alone, according to Danny Brager, a senior vice president at Nielsen, which tracks sales. “Abstinence — or reduction — of alcohol consumption has taken on a new life,” he said in an email.

Nonalcoholic bars are opening in cities across the country. Venerable cocktail bars are adding booze-free drinks to their lists. And there is a growing sense among professional bartenders that their business culture may be changing, too.

In 2010, when Jack McGarry opened the Dead Rabbit in Manhattan’s financial district with Sean Muldoon, stereotypical back-of-house debauchery was commonplace. “I was at the forefront of that free-for-all,” Mr. McGarry said. “I would’ve drank during shifts, I would’ve drank afterward.”

But Mr. McGarry, who first went sober three and a half years ago after recognizing that he had addictive tendencies, said he has noticed a heightened interest in sobriety over the past few years, and a far more open discourse. “People in the industry approach me often,” seeking advice on cutting back their drinking, he said.

In late September, he went to a drink tasting after a long run on an empty stomach and got drunk, a story that he shared in an Instagram post. (To sample cocktails, Mr. McGarry dips a straw into the drink and suctions out a sip to taste, then spits it into a cup.)

The post was to hold himself accountable, he said, and to announce that day as his new sober date. One of the first comments on that post read, “But if we all gave up we’d have no industry.” The commenter was a brand ambassador for a liquor company.

That reaction, Mr. McGarry believes, is emblematic of a larger problem: peers assuming, incorrectly, that he prescribes sobriety to his colleagues and employees.

“Alcohol will always be there,” he said, and people will always drink it. What the industry needs isn’t more sober people, necessarily, but more transparency.

Joanna Carpenter, a cocktail consultant who works primarily with liquor brands, attributes some of the changing attitudes toward sobriety in the industry to “how we communicate in the digital age, and the pervasiveness of call-out culture” —  people are now more forthcoming on social media about their own experiences, and the ways in which they feel others may have crossed lines.

Ms. Carpenter stepped away from alcohol because of her family history with addiction, going sober for six months in early 2018 and taking steps to reduce her consumption ever since. She found solidarity on a private Facebook thread with other women in the business who are sober, or semi-sober. Offline, though, safe spaces were harder to find.

“If you did not drink, you got bullied,” she said. “You got questioned. You got made fun of.”

One of her goals is to normalize conversations about substance abuse and mental health among bartenders. (In an industry that rarely offers insurance to employees, mental health resources are difficult to access. As Ms. Golden put it, “We don’t get health insurance, but we get free drinks.”)

The writer Julia Bainbridge, whose cookbook devoted to nonalcoholic drinks will be published in October, also attributes the trend toward less drinking in the industry in part to the #MeToo movement. Bad behavior in the restaurant business often goes hand in hand with the copious consumption of alcohol. (In November, The New York Times reported on allegations by four women in the wine industry, who accused a celebrated sommelier of sexually assaulting them or attempting to do so.)

Ms. Bainbridge is optimistic about the state of the industry, and has seen an uptick in sober-curiosity in her circles. “The conversations, and actions, are taking place,” she said. “I see people creating best practices, hiring H.R. personnel, or otherwise trying to professionalize.”

But the idea of a sober bartender still takes some bargoers by surprise. When Adrienne Oakes, a bartender at Up & Up in Greenwich Village, explains to customers that she’s sober, the reaction is often respectful, but not always.

“There are some guests that are like, ‘Oh, that’s like a chef that doesn’t eat,’ ” she said.

She gave up alcohol at her doctor’s suggestion, but often has to lie to customers until they drop the subject. “I have to make up reasons that I don’t drink,” she said. “Me saying that I don’t drink should be enough.”

And, Ms. Oakes pointed out, she is not obligated to be anyone’s drinking buddy.

“That’s actually not a part of my job description,” she said. “I’m supposed to give you hospitality and make you a proper cocktail and make sure you’re enjoying your time in this space that we’ve curated. Me drinking, or not, is not a part of that experience.”