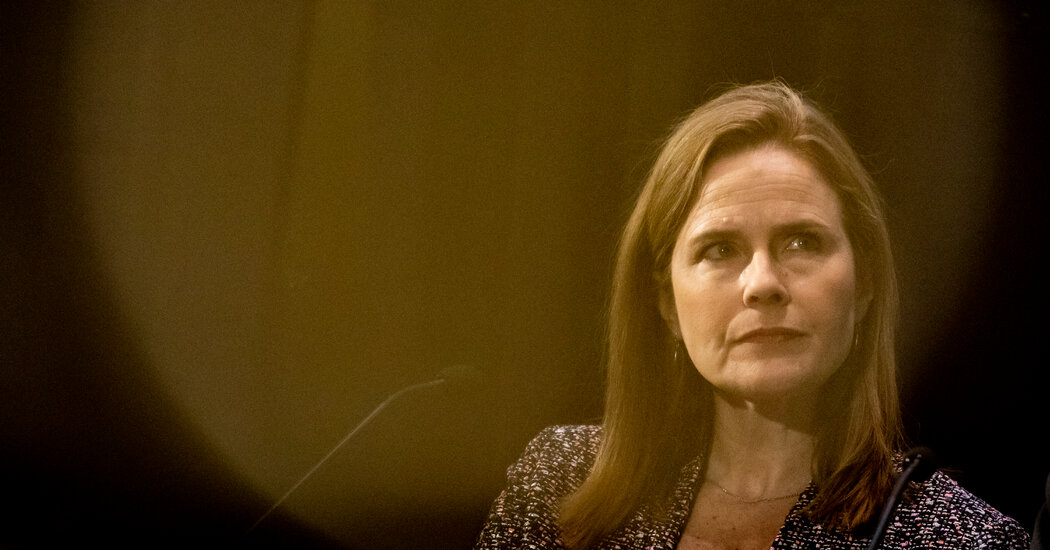 We live in an era where everything is shocking and nothing is surprising. Every major item of news over the last week or so — Justice Ruth Bader Ginsburg’s passing, the inevitable Republican hustle to replace her on the eve of an extremely contentious election with the nomination of Amy Coney Barrett and the sectarian clashes over her faith — arrived as a jolt to a fragile, anxious nation. And yet all of it was long in the making — the conflict over Judge Barrett’s religion most of all.

In 2017, when Judge Barrett was appointed as a judge on the U.S. Court of Appeals for the Seventh Circuit, in Chicago, she faced a tense confirmation hearing in which Senator Dianne Feinstein infamously remarked that “the dogma lives loudly within you, and that’s of concern.” A mother of seven and a devoted Roman Catholic, Judge Barrett has continued to field concerns about whether she will be able or willing to resist the expectations of her church when it comes to cases involving relevant moral issues, and whether she will cater to the wishes of People of Praise, a mostly Catholic ecumenical organization with a distinctly traditional bent, of which she is a member.

The scrutiny focused on Judge Barrett’s beliefs has provoked allegations of old-fashioned anti-Catholicism on behalf of her Democratic critics. A good amount of febrile nonsense has indeed been floated regarding Judge Barrett’s spiritual life, such as the notion that People of Praise inspired Margaret Atwood’s dystopian novel “The Handmaid’s Tale,” a charge that is reminiscent of 19th-century myths of nuns kidnapping good Protestant girls to force the faith upon them.

But the animosity faced by Catholics in today’s America has little in common with its direct predecessor. Real sex-abuse scandals have replaced the imaginary ones circulated in the lurid tracts of yesteryear. White Catholics are no longer subject to the religious bigotry that once animated vicious rumors and, occasionally, violent attacks on Catholics and their places of learning and worship. Rather than regenerating a long-vanquished prejudice, Judge Barrett’s nomination has merely renewed attention to a fundamental conflict, centuries underway, between Catholicism and the American ethos.

The United States is unusual among nations: We are a country founded along the contours of a philosophy. That philosophy, liberalism, is the logic that underlies our founding documents and our national ethos of individualism, self-reliance, liberty, equality and tolerance. Whether we live up to those values is another matter; they are our reason for being, and the principles that bind us together.

But liberalism, like any storied philosophy, has its difficulties and points of contention. While liberal societies seek to build legal and cultural climates of toleration for expression and religion (among other things), liberal theorists have long recognized that it’s risky to tolerate notions and movements that could undermine liberal democracy itself. In the case of religious tolerance, liberals have historically grappled with the matter of Roman Catholicism.

Roman Catholicism does not readily distinguish between public and private moral obligations. In the thought of John Locke, one of liberalism’s earliest architects, willingness to make that distinction was critical to participation in a tolerant society. “Basically,” the political theorist Jean Bethke Elshtain wrote in a 1999 essay, “Locke drew up a strong civic map with religion within one sphere and government in another. A person could be a citizen of each so long as that citizen never attempted to merge and blend the two.” Locke notably excluded Catholics from the religions meriting toleration because he suspected they could not be trusted to leave their faith in the appropriate sphere.

Locke’s concern was not entirely baseless. Even the most modern and liberal-friendly popes have noted without special fanfare that the teachings of the church pertain to the decisions Catholics make about politics. “The social doctrine of the Church has once more demonstrated its character as an application of the word of God to people’s lives and the life of society, as well as to the earthly realities connected with them,” Pope John Paul II wrote in one exemplary 1987 encyclical.

Generally, contemporary American Catholics aren’t particularly beholden to the church; as I wrote recently, the logic of partisanship has replaced the moral primacy of the faith. That means that, for most Catholics, their religious beliefs never clash with their civic interests in a disruptive way. When they do, the solution is typically some kind of exemption from particular legal or civic obligations.

Judge Barrett has meditated on this matter herself, as a co-author of a 1998 law review article addressing this genre of conundrum. The essay considers the options of Catholic judges hearing capital punishment cases, which the state permits but the church forbids. Judge Barrett and her co-author maintain that Catholic judges must or should recuse themselves from such cases, concluding that “judges cannot — nor should they try to — align our legal system with the Church’s moral teaching whenever the two diverge. They should, however, conform their own behavior to the Church’s standard.” With individuals, this kind of resolution usually suffices.

But Catholic institutions are another story: It is in their fortunes that Locke’s suspicions have proven most prescient. Roman Catholic schools have warred bitterly over their exemption from anti-discrimination employment statutes, scoring a win in a case argued before the Supreme Court as recently as this summer. Catholic hospitals have found themselves embroiled in court battles for refusing to perform or even discuss abortions, regardless of state or federal law. And, perhaps most famously, the Little Sisters of the Poor, an order of Catholic nuns that operates nursing homes for low-income seniors, fought the Affordable Care Act’s contraception mandate all the way to the Supreme Court, and won.

In each case, Catholic institutions have asked for exemptions to various laws, citing the First Amendment. In Lockean terms, they have argued that business putatively conducted in the civil sphere actually belongs to the religious one, and thus ought not be subject to the rules of civil government. They are staking out and reclaiming jurisdictional territory from the state, in other words, and each victory adds ground to the church’s domain.

There are those who worry that the exemption solution won’t work forever, and those who worry that it will work too well, shrinking the role of religion in public life and reducing the ranks of the faithful. There are also those, like me (I should note that I, too, am Catholic), who suspect that both may happen at once: that religions whose ethics conflict with the broader culture will shift toward forming small, dense enclaves, where they are unlikely to encounter legal challenges to their preferred practices. Evangelicals, for example, already predict this fate for themselves. But since the Roman Catholic Church is enormous, highly organized and financially capable of fighting for its ground to a much greater extent than other religious groups, cases concerning Catholic institutions will most likely continue cluttering court dockets for the foreseeable future.

It’s into this context that Judge Barrett steps as a piously Catholic woman and a Supreme Court nominee. She neither created this situation nor will she end it; no justice placed on the bench could. It has a life and a legacy bigger than any individual cast in it by history, and it seems poised to keep us in shocking, surprising times.