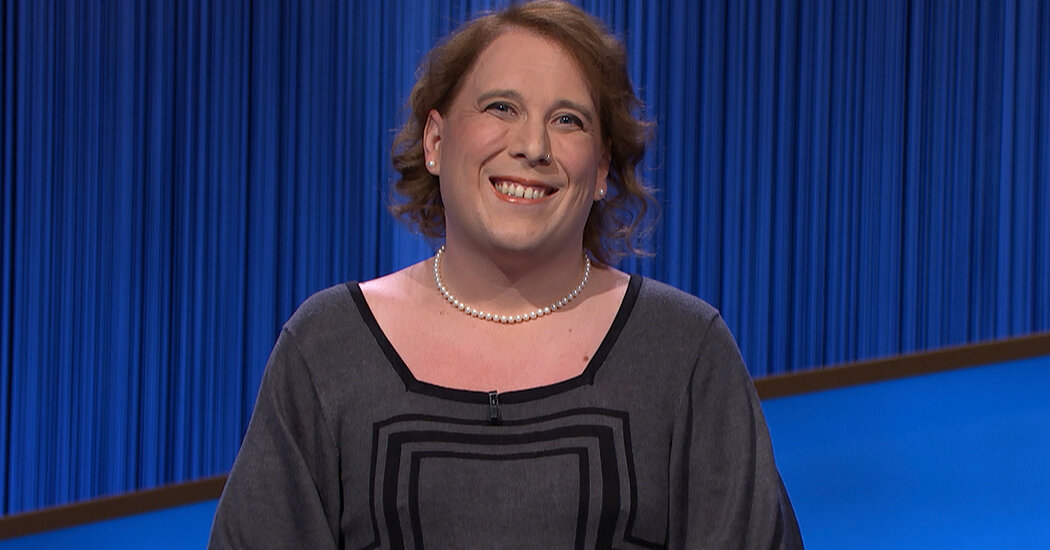 Schneider, a software engineering manager, is the fourth contestant in the game show’s history to reach the milestone.

Now that Amy Schneider has experienced what it’s like to dominate on the “Jeopardy!” stage, she wonders why streaks like hers don’t happen more often.

Once you get used to the buzzer and the cadence of the clues, she explained in a recent interview, you have a significant advantage over a candidate who comes in cold.

And Schneider has certainly settled into her groove.

On Friday, she became the fourth contestant and the first woman in the history of “Jeopardy!” to surpass $1 million in winnings during regular-season play. She did so on her 28th game, a runaway in which she won over $42,000, continuing a streak that has captured the attention of game-show fans across the country.

“It’s not a sum of money I ever anticipated would be associated with my name,” Schneider, a 42-year-old software engineering manager who lives in Oakland, Calif., said in a news release.

Schneider, who grew up watching “Jeopardy!” at home with her parents and in eighth grade was voted most likely to appear on the show, has had a whirlwind of a week — for good reasons and bad. On Monday, she tweeted that she had been robbed, losing her credit cards, identification and phone. (As a result, she said she would need to pause her detailed recaps of each game on social media).

The $1 million mark is a rare one to reach — Ken Jennings was the first player to do so, in 2004, 30 games into his record 74-game run. But fans have gotten increasingly used to seeing contestants achieve it. James Holzhauer became the second person to hit $1 million during his 32-game streak in 2019. Three months ago, Matt Amodio surpassed $1 million as well, amassing $1.5 million before he was beat after 38 wins.

The recent pattern of streaks on the show has fueled theorizing among fans watching from their couches and among members of the show’s production team. Some have postulated that pandemic-related delays in production have benefited some contestants by giving them more time to study. Some point to the increasingly vast amount of resources online. Or, it could just be chance.

“To some extent, I think it’s just got to be a statistical fluke,” Schneider said.

Schneider is doubtful that the extra time she had to prepare during the pandemic helped her significantly. Ultimately, she said, it’s not something you can cram for.

“To be good at ‘Jeopardy!’,” she said, “you just have to live a life where you’re learning stuff all the time.”