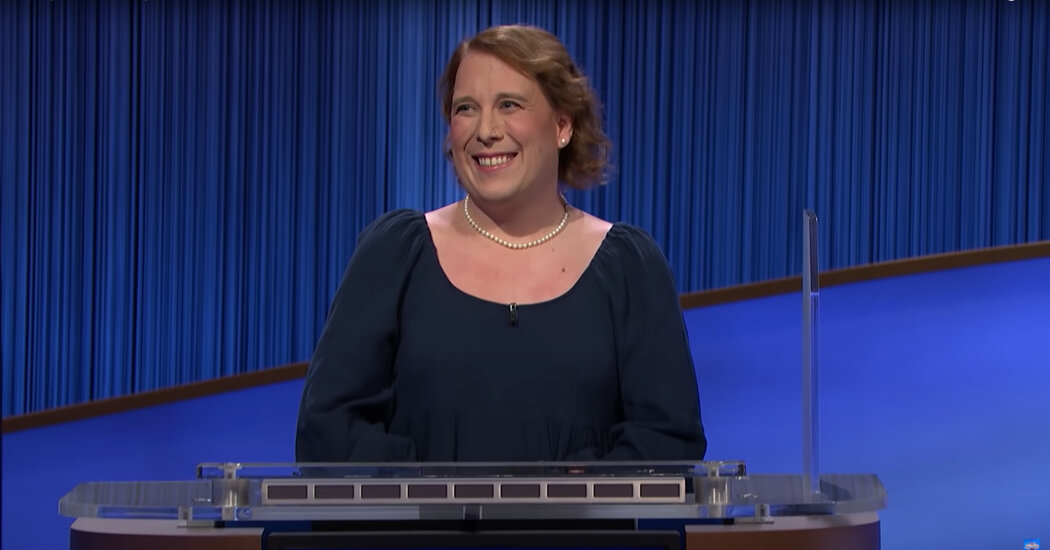 When Amy Schneider was an eighth grader in Dayton, Ohio, her fellow students voted her most likely to appear on “Jeopardy!”

On Wednesday, Ms. Schneider, 42, an engineering manager from Oakland, Calif., became the first woman in the show’s history to achieve 21 consecutive wins, surpassing Julia Collins, who had set the record of 20 wins in 2014.

“I never dreamed of matching Julia’s streak,” Ms. Schneider wrote on Twitter. “It’s hard to say how I felt: proud, dazed, happy, numb, all those things.”

In an interview on Thursday, Ms. Schneider said that when she was not concentrating on the answers, she was thinking about whether she might beat Ms. Collins’s record.

“I could pretend that I didn’t have my eye on the various leaderboards at that point, but I was definitely aware,” she said. “I knew what was at stake.”

The episodes were filmed in September and October, but Ms. Schneider did not make her television debut until Nov. 17. After each episode, she went on Twitter to write colorful play-by-play accounts of her wins or to post updates about her cat, Meep.

This week, when she notched her 20th win, she described how she had nearly missed her chance to tie Ms. Collins’s record when one of her fellow contestants, Josette Curtis, began gaining on her.

“Josette, a registered dietitian, went on a bit of a run in the Vitamin category, and all of a sudden my shot at a runaway was in doubt,” Ms. Schneider wrote. “And if Josette found the last Daily Double, she could potentially take the lead!”

In the end, Ms. Schneider handily won that game and the following episode.

Her 21st win came when she correctly identified the ship that Officer Charles Lightoller had boarded on April 15, 1912.

Ms. Schneider was congratulated by previous winners like Larissa Kelly, who appeared on the show in 2008 and 2009 when she was a graduate student and who once held the record for highest-earning female contestant.

“Well, it was fun to hold a Jeopardy! record for a few years,” Ms. Kelly wrote on Twitter. “But it’s been even more fun to watch @Jeopardamy set new standards for excellence, on the show and off.”

Ms. Schneider, a transgender woman, lives in Oakland with her girlfriend, Genevieve.

As a child, she watched “Jeopardy!” with her parents, she said, and dreamed of being a contestant one day. She read voraciously and absorbed trivia. In grade school, she participated in geography bee competitions and made it to the top 10 in Ohio in 1992.

“I got a National Geographic atlas for that,” Ms. Schneider said.

When the opportunity to appear on “Jeopardy!” arose, she said, she felt unsure about how to discuss her gender identity.

In the end, she decided to acknowledge it simply — by wearing a pin bearing the trans pride flag during an episode.

The decision, Ms. Schneider said, was in part inspired by Kate Freeman, who wore a similar pin in December 2020 when she became what many believe was the first openly transgender woman to win on “Jeopardy!”

“It was something that I wanted to get out there and to show my pride in while not making it the focus of what I was doing there,” Ms. Schneider said. “Because I was just there to answer trivia questions and win money.”

Ms. Schneider’s record has brought positive attention to the long-running quiz show after it was rocked by drama over who would permanently succeed Alex Trebek, the host for more than 36 years.

Over the summer, Sony Pictures Entertainment, which produces the show, announced that Mike Richards, an executive producer on the show, would be the permanent host. The decision disappointed “Jeopardy!” fans who had become invested in a series of celebrity guest hosts the show appeared to be auditioning to replace Mr. Trebek.

The show then had to contend with the fallout from a report by The Ringer that revealed offensive comments Mr. Richards had made about women on a podcast in 2014. Mr. Richards resigned as host and executive producer shortly after the report was published.

Sony later announced that it would keep Mr. Jennings and Mayim Bialik, a sitcom actress, as its hosts.

Ms. Schneider is not allowed to say how far she got on the show. The next episode, in which she competed against Nate Levy, a script coordinator from Los Angeles, and Sarah Wrase, an accountant from Monroe, Mich., was scheduled to air on Thursday.

Ms. Schneider said her advice for anyone who wanted to replicate her success was “just be curious.”