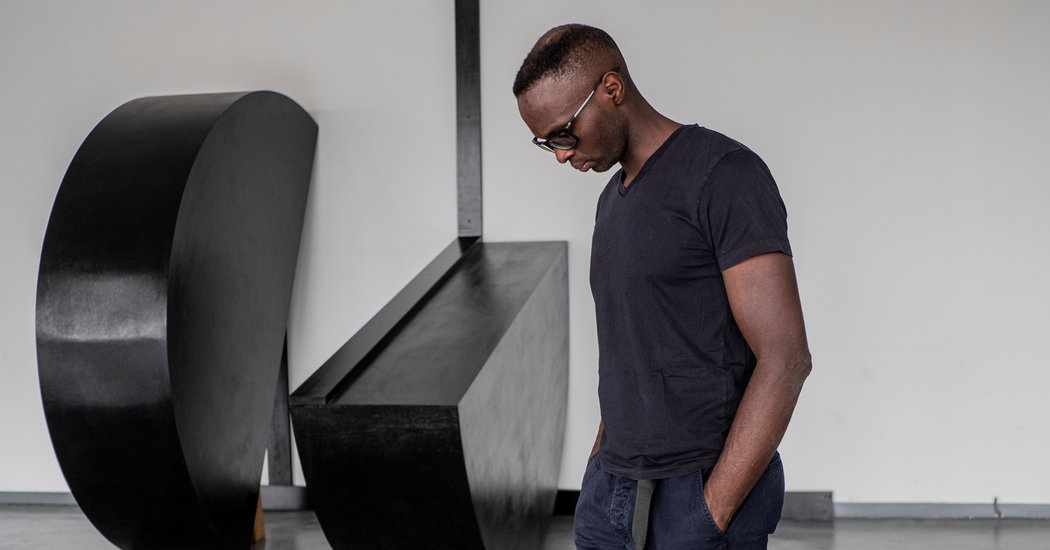 Serge Alain Nitegeka hasn’t been free to roam in a while. For over five years, the Johannesburg artist has been unable to leave South Africa as he waits for his case for citizenship there to be resolved. (He was born in Rwanda.)

Overseas exhibitions, commissions — he’s had them. But from a remove. Paintings are easy enough: You pack them, and give instructions for how they need to hang. Installations are more complicated. One new work involves a plot of fresh soil, a bundle of twigs, as in firewood, and Mr. Nitegeka’s sculptures of makeshift objects that migrants and refugees often carry.

The work represents a pit-stop on a forced journey; its spirit requires that the dirt and wood be local. For Mr. Nitegeka’s exhibition “Black Migrant,” with the Marianne Boesky gallery (it is viewable by appointment or on the gallery website), he relied on the gallery team to gather New York dirt, which turned out darker and mulchier than the reddish soil Mr. Nitegeka had pictured. That was fine — adaptation was the point of the piece. But the more tactile and sensory these decisions, the more the distance frustrated him.

“It gets in the way of progress,” he said by telephone from Johannesburg recently. “You need to be in there, smell it, feel the presence.”

Nevertheless, he added, “that’s the beauty of art in this day and age, things can go and you can have a show still.” His situation has given him practice in the remote work that many artists will likely confront in the aftermath of the coronavirus pandemic until travel becomes feasible.

Perhaps fittingly, Mr. Nitegeka’s work is all about displacement and obstacles. Forced migration, he said, is his “lifelong exploration.” Its roots are specific and intense. He was an 11-year-old in Rwanda when the 1994 genocide occurred. The family left in a hurry.

“I didn’t even have a chance to go back in the house,” he said. “Someone arrived, and my dad was like — your sister, your brother, your mum, you’ve got to go now.” There wasn’t time to put together the “fragile cargo,” the migrant’s bag of essential or treasured items.

Across the Congolese border in Goma, a cholera epidemic swept through the city. The boy roamed the town on his own, from the hillside where the family rented a room on the edge of the refugee camp, down to the lake. “There were dead bodies in the street, rolled up in mats, some not even covered,” he said. “And there was this stench.”

Mr. Nitegeka made it to Nairobi, where he attended high school, and then to Johannesburg. “I had nothing,” he said. “I could survive on five dollars, even three dollars, for a month.” He found his way to art school at the University of the Witwatersrand.

Since his first exhibition in 2008, his career has flourished. In 2015 he had a solo show at SCAD Museum of Art in Savannah, Ga., and Boesky devoted its Armory Show booth to his work. The same year, he participated in the South African pavilion at the Venice Biennale.

Mr. Nitegeka is best known for his use of abstraction, notably his dramatic installations that involve forests of crisscrossing plywood planks, connected at irregular angles, painted black. Each is built to fit the space — a gallery, a museum hallway, or in a spectacular example recently, the atrium of the Norval Foundation in Cape Town.

The installations have a mathematical beauty — a geometry. But they are also unruly, bristling. Visitors have to pick their way through the maze. Though rendered in an elegant formalized language — Mr. Nitegeka, a student of Minimalism, has cited Richard Serra as an influence, along with architects like Louis Kahn — the works are an obstacle course that symbolizes the migrant’s journey.

His paintings, too, operate in a narrow palette: black, red, yellow, a specific blue. They are made on wood, often leaving sections exposed. The sense of carpentry runs through all his projects, as when he includes in his installations the wood crates used to ship the art, as ready-mades.

They invoke the art trade, but also, as the curator Hansi Momodu-Gordon observed in a 2015 essay, “the artist’s personal story of forced migration and perhaps also the forced transportation of African people during the slave trade.”

In the past decade, as the global refugee and migrant crisis became a salient topic for artists, Mr. Nitegeka’s language set him apart from more literal approaches.

“He has a different way of engaging political metaphors,” said the curator Marie-Ann Yemsi, who has included Mr. Nitegeka in an upcoming show at the Palais de Tokyo, in Paris. “These questions of desperation, of loss, are present in his work in an abstract fashion, but at the same time anchor it in the tumult of the world.”

In Johannesburg, Mr. Nitegeka rents a large studio in an industrial zone across the freeway from downtown. The city has a busy art scene but Mr. Nitegeka keeps his own company. When not at home with his wife and two children or working late in the studio, he’s more likely to be cycling the city on an aimless six-hour ride.

Privacy is his default mode. Speaking with me in his studio last year, he had brushed away talk of his personal journey. “It’s a story I don’t want to engage,” he said.

Yet his new work at Boesky strikes a different tone, lyrical and intimate. The installation of dirt has a pathos and directness absent from his geometric pieces. His new paintings mark a return to the figurative, with a series of charcoal self-portraits: He is nude, standing or crouching, his body barred by black blotches of paint as if pressed by a burden.

If Abstraction was his protective fortress, he is starting to lower the walls.

“I wanted to go back to figuration because there is that vulnerability,” Mr. Nitegeka said. “There’s a kind of self-evaluation that comes from looking at myself, the exercise of taking pictures of myself in the studio. It’s quite exhausting.”

He has also made, for the first time, an audio piece, in which a speaker inside an art crate plays his voice, reading an excerpt from his journal. It describes a border crossing: The uncertainty that you will be let through, the moment of fear, and then the march forward.

The entry, from 2012, describes a specific incident, Mr. Nitegeka said, though he prefers not to say where. But it was a moment when memories of leaving Rwanda came rushing at him.

“It’s part of a kind of healing process,” he said. “Some of the things in there, my wife keeps urging me to talk about them: ‘Have you seen someone? Have you told your friends?’ Dealing with some of this stuff, especially at a young age — my path has been slowly, slowly, slowly. This time felt right to start unpacking.”

For Mr. Nitegeka, one consequence of his displacement is that he is stateless. He has managed to travel in the past but on temporary papers. His application for South African citizenship is underway, he said, but the process takes time.

Since late March, South Africa has been under lockdown as the government tries to get ahead of the coronavirus — shrinking Mr. Nitegeka’s world even further. From Johannesburg, he sent a message by WhatsApp, expressing concern for New York City.

“I haven’t left the confines of my home,” he wrote. “Appreciating the surreal silence, the sudden halt to almost everything, spending more time with my loved ones.” He added, “ Trying to focus on the positives.”

Through May 9, Serge Alain Nitegeka, “Black Migrant,” at Marianne Boesky Gallery; viewable by appointment and online.