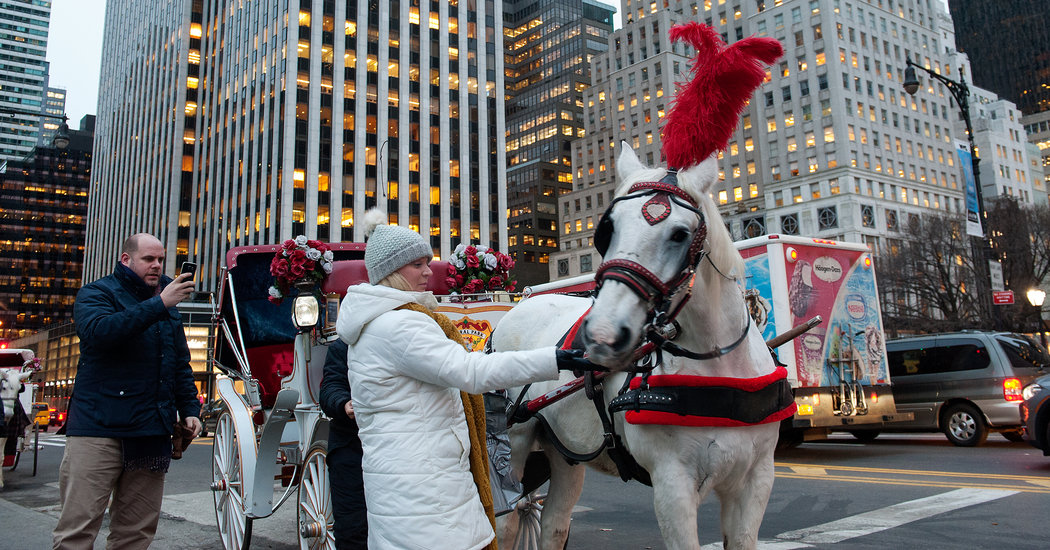 The large brown horse stumbled multiple times in Central Park on Saturday before collapsing onto the pavement. It lay on the ground for minutes, apparently unable to stand, as multiple men trussed its legs together and hauled it into a trailer.

This carriage horse from Clinton Park Stables is seen stumbling and unable to straighten their back legs in Central Park earlier today.

After years of doing nothing for carriage horses, will @NYCCouncil finally protect them? cc: @CoreyinNYC pic.twitter.com/EzSgvxoCkb

Some hours later, the animal, a 12-year-old mare named Aisha, was euthanized, according to officials and a carriage industry group.

By the next day, the disturbing footage of her collapse and news of her death had spread on social media, prompting an outcry online and renewing calls by some to put an end to New York City’s carriage-horse trade, which has for years been a political flash point.

The next day, dozens of people attended a protest staged by the animal rights group, NYCLASS, which first posted the video online and has long sought to pull carriage horses from New York City.

“We have a duty and responsibility to do all we can to end the abuse of these horses, however we can,” said NYCLASS’s executive director, Edita Birnkrant, in an interview on Monday.

Mayor Bill de Blasio said on Twitter on Sunday that the Police Department’s Animal Cruelty Investigation Squad was looking into Aisha’s death. He described the footage as “painful,” adding that it “says so much about a persistent problem.”

Several elected officials, including the City Council speaker, Corey Johnson, and the city comptroller, Scott M. Stringer, have also called for an investigation into the circumstances surrounding the incident.

Ms. Birnkrant said she first heard about Aisha’s collapse on Saturday from several pedicab operators stationed near Central Park. As she and others went to the park, they collected video footage.

In one video that Ms. Birnkrant provided to The Times, a carriage driver can be seen blowing smoke into Aisha’s face until the horse flips over on the ground. No veterinarian was called to the park as a number of carriage drivers tried to move Aisha into the trailer, she added.

“It was just horrific watching her being brutalized because they were so desperate to get her into this trailer,” Ms. Birnkrant said. “And it was not being done in a humane way.”

Christina Hansen, a spokeswoman for Historic Horse-Drawn Carriages of Central Park, which represents the carriage horse industry, said in a statement that the horse was moved “following large animal rescue protocols.”

In her statement, Ms. Hansen said that Aisha “showed sudden signs of distress” at around 12:30 p.m. on Saturday. The horse had completed one ride that day and had been waiting at a stand in the park, Ms. Hansen said.

After the trailer arrived, Aisha was taken to a stable, where the horse’s regular veterinarian treated her within an hour of the incident, Ms. Hansen said. Results of tests to determine Aisha’s cause of death were still pending.

A spokesman for the city’s health department, which oversees working horses, said the agency had responded to reports of Aisha’s collapse and monitored the situation, and that the horse “did not respond to treatment and was humanely euthanized.”

Including Aisha, three carriage horses have died so far this year, according to the health department, two of them euthanized after contracting colic.

Ms. Birnkrant said Aisha’s death was representative of what she called a low standard of care for the city’s carriage horses.

“Just like anyone else, any other living being having a medical emergency, whether they live or die, depends on the care given immediately after,” she said. “There was not a qualified vet on the scene; there were unqualified people trying to get her into a trailer.”

The videos reopened the debate over the city’s carriage-horse industry, which animal-rights activists have long called inhumane and abusive. Supporters have said the horses are treated humanely and that the carriages are a romantic link to New York City’s past that provides jobs and appeals to tourists.

While campaigning in 2013 to become mayor, Mr. de Blasio vowed to ban the horse-drawn carriages on his first day in office. But in the face of opposition from drivers and their allies — the horses have remained popular with New Yorkers — he scaled back.

In 2018, Mr. de Blasio’s administration restricted the carriages from picking up passengers outside of the park. Last year, the City Council passed a bill to prevent carriage horses from working on hot or humid days.

Ms. Birnkrant and her organization have not given up on an eventual ban for the practice. But in the face of a difficult political reality, they are calling for more reforms, including a policy that would require dashboard cameras on horse carriages so that officials could better monitor the horse’s conditions.

“If we can achieve a ban, that would be fantastic,” Ms. Birnkrant said. “In the meantime, we’re going to fight every battle to end the cruelty that has been happening.”