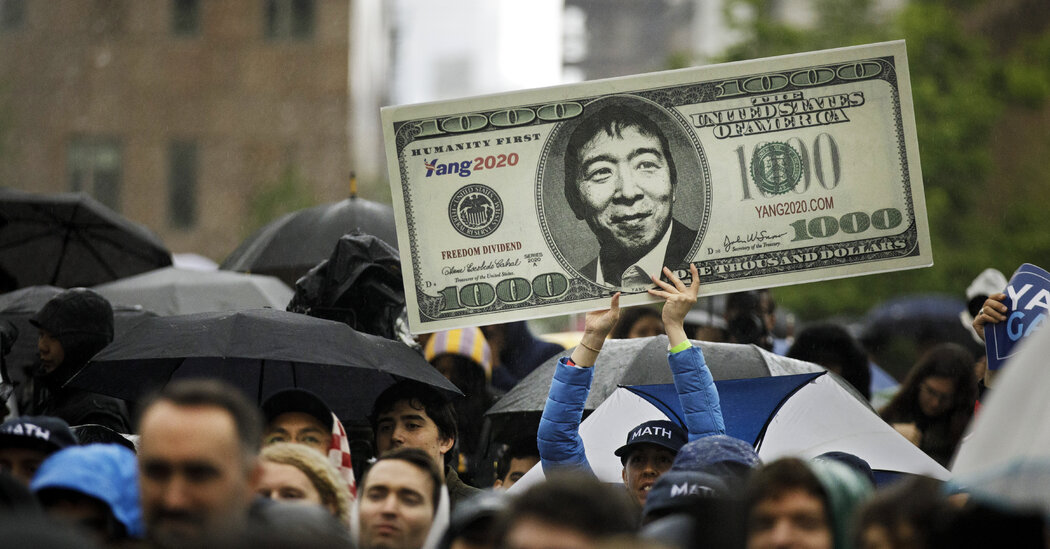 There are better ways to follow the Rev. Dr. Martin Luther King Jr.’s call for a guaranteed income.

“I want to be the anti-poverty mayor,” declared Andrew Yang, currently leading the polls in New York City’s open mayoral race, in an interview last week with the 92nd Street Y.

Mr. Yang has no previous experience in government. As he put it to Seth Pinsky, the chief executive of the Y: “My main experience was running a private company.” Most people know him from his run for president in 2020, and his core selling point during that campaign was his plan for a universal basic income. The cornerstone of his platform was a pledge to send every American citizen over age 18 what he called a Freedom Dividend, or a no-strings- attached monthly check of $1,000.

It’s also at the heart of his New York run. In Mr. Yang’s announcement video, the first policy priority he talked about was a guaranteed income. “We need to realize Martin Luther King Jr.’s dream of a guaranteed minimum income and get cash into the hands of people who need it most,” he said.

Mr. Yang has tapped into recent interest in guaranteed income, but the idea is nothing new — Sir Thomas More argued for it in his 1516 book, “Utopia.” It’s gained wide traction over the last several years as some people worry that automation will consume the jobs of living, breathing humans, while others call for policies that could radically reduce poverty, income instability and inequality. Mr. Yang is just the latest proponent in a group that includes voices as wide ranging as Andy Stern, a former president of the Service Employees International Union, and Chris Hughes, one of the founders of Facebook.

But not all of them are talking about the same concept when they say they support a universal basic income. And it’s the differences that matter most. Mr. Yang’s vision has little in common with what Dr. King fought for toward the end of his life: enough money from the government to actually live on. Enacting a national guaranteed income could significantly reduce financial suffering in this country if done right — but that’s not the sort of plan Mr. Yang is peddling.

The most important part of Mr. Yang’s 2020 guaranteed income plan was not the size of the checks but how he intended to pay for them. He promised to fund the program by implementing some new tax policies and “consolidating some welfare programs.” Anyone who wanted in would first have to make a choice: continue to get the bulk of the direct government benefits they currently received, or forfeit them and instead get $1,000 a month. Other than Social Security retirement, disability benefits (and potentially some other credits), no one could get both a Freedom Dividend and government assistance.

His plan for New York City, while less expansive, follows the same pattern. In addition to private donations and some potential tax policy changes, Mr. Yang would fund the $1 billion necessary to implement his program from “inefficiencies” in the social safety net and a reduction in outlays — for homeless services, for example — that he sees as redundant if people are receiving regular checks.

Mr. Yang’s vision hews close to libertarian and conservative thinkers. Charles Murray, for example, author of “The Bell Curve” and “Coming Apart,” backs a universal basic income but one that replaces all other government benefits entirely, including Social Security and Medicaid. This is also the program design favored by many of the technology C.E.O.s who have lately gotten on board.

But there is no way a basic income could ever come close to the vast array of assistance the government currently provides. For someone who gets minimal or no help from the government, a $1,000 check may sound like a great deal. It would also free them up from meeting what are very burdensome bureaucratic requirements for public benefits and allow them to decide where and when to spend the money. But it pales in comparison to the value of a housing voucher or a child care subsidy. It won’t cover health care or retirement. A basic income that takes these away, then, really just frays our social safety net until it’s too threadbare to support anyone. It’s a Trojan horse for dismantling public assistance altogether.

It’s a far different concept than what most progressives mean when they call for a guaranteed income. Dr. King argued for a basic income worth as much as the country’s median income, which today is more than $68,000 per household. In the models that have cropped up in cities across the country, mayors are testing sending regular checks to those under a certain income level without making them give up anything. The idea is that the money can take the edge off poverty. In Stockton, Calif., a rigorous analysis found that it reduced income volatility, allowed people to afford basic essentials, and increased mental well-being. “I spend more time with my kids than I ever have,” one recipient explained. Another said, “I have hope,” adding, “It’s amazing how much not feeling like a parasite helps your health.”

It may sound utopian, but a national guaranteed income could alleviate desperate poverty and give Americans the breathing room to make healthier, happier choices about their lives without harming our labor force or economy. A similar experiment in Finland concluded that recipients were in a better mental state but were no less likely to work. When the economist Ioana Marinescu reviewed evidence on the effects of guaranteed income-like experiments in the United States and Canada, she found that, at most, recipients modestly reduce their work — perhaps finding a bit more time in the day for family or leisure — but don’t drop out of the work force altogether. The same has been found in other countries as well. In the Stockton study, recipients of guaranteed income were actually more than twice as likely to obtain full-time employment over the two-year experiment.

Why would this be, when we would assume that with no financial pressure, many of us would choose to kick back rather than keep working? Partly because, other than Dr. King’s proposal, the amounts discussed are never enough to actually live on. A thousand dollars a month goes a long way toward reducing deprivation and easing financial anxiety. It’s not enough to raise even a single person above the poverty line, which is quite meager at $12,880. It’s not an income that would allow anyone to rent an apartment, buy food and raise a family.

Not to mention that most Americans benefit mentally and physically from work. Many people want to work, but the work they can find doesn’t reward them in turn. Too many jobs simply don’t offer financial security in the form of decent pay, stable schedules and reliable benefits.

It isn’t so far-fetched to think that this country might implement something like a robust guaranteed income. In 2020, we participated in a mini-experiment when Congress sent everyone making under a certain income a $1,200 check, an experiment it’s repeating with another round of checks currently on their way out. What did people spend the first round of money on? Most put it toward regular household needs, the most common of which were food and rent. And the checks, coupled with other economic supports like enhanced unemployment benefits, kept poverty at bay. The poverty rate actually fell during the first three months of the pandemic, even as millions lost jobs and income.

We might be able to keep it going after the pandemic subsides. Democrats have included a one-year child allowance in their relief package, which will send all families making less than $150,000 a year monthly payments of $300 for children five and younger and $250 for older ones, with phased-out payments at higher incomes. It could cut the share of children living in poverty in half, and Democrats are promising to make it permanent before it expires.

Mr. Yang has months to make his case to New Yorkers, and we’ll have to examine the rest of his platform as he rolls it out. But it’s essential to pay attention to the details. A guaranteed income holds the promise of creating a healthier, happier, more financially stable citizenry, but only if we don’t let it get perverted.

Bryce Covert (@brycecovert) is an independent journalist and a contributing opinion writer for The Times.