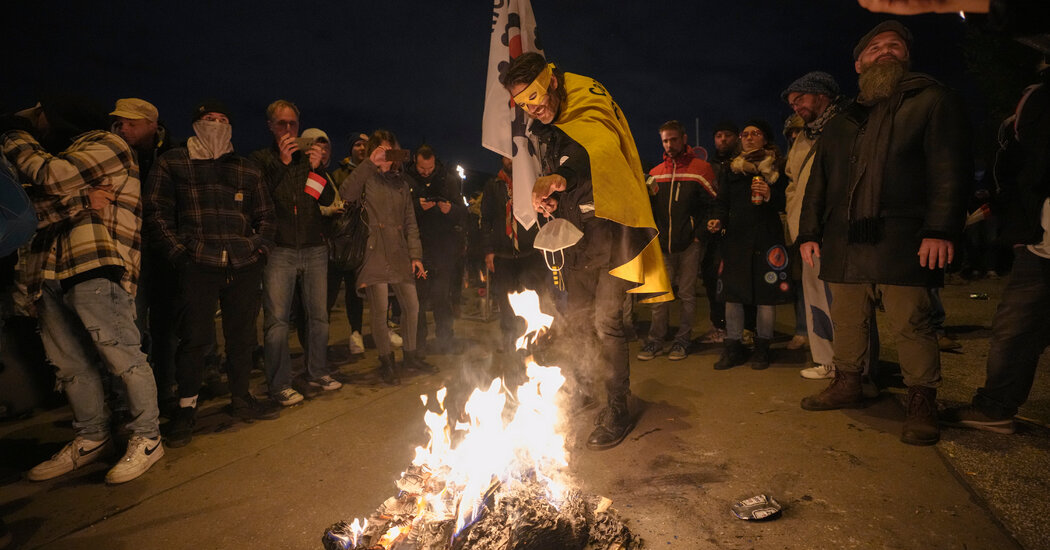 As a new wave of Covid infections spreads over Europe, resistance to public health measures is growing, and not just in Austria.

VIENNA — Daniel Zeman wasn’t able to sell any of his handmade apple-ginger liqueur last year during the Christmas season because Austria, along with the rest of Europe, was in lockdown. He finally opened his stand four days ago, only to have the government announce that Sunday would be the last day. Austria was locking down.

At a time when vaccinated people were looking forward to a return to traditional holiday rituals, the decision was a blow that angered some and frustrated nearly everyone.

“If we have to close down in January, I understand that,” Mr. Zeman said. “But now it is Christmastime and everyone wants to be together, to drink punch, buy gifts and do things with their families.”

Europe is experiencing a menacing fourth wave of the coronavirus, with soaring rates of infection. While Austria may be the first European country to respond with a nationwide lockdown, it may not be the last. That prospect, along with increasingly stringent vaccine mandates, is setting off a backlash here and elsewhere, with mass demonstrations in Vienna, Brussels and the Dutch city of Rotterdam over the weekend, sometimes punctuated with violent outbreaks.

But European leaders may feel they have little choice, despite the spread of vaccines that were seen a year ago as a fail-proof way out of the pandemic. Austria, where 66 percent of the population is fully vaccinated, reported more than 14,000 new cases of the virus within 24 hours on Sunday. Over the past week the Netherlands has been averaging more than 20,000, while Germany has seen roughly double that number.

Austrian officials’ decision to impose a lockdown that will last at least 10 days and as many as 20 came after months of struggling attempts to halt the contagion through widespread testing and partial restrictions. Starting Monday, public life in the country is to come to a halt, with people allowed to leave their homes only to go to work or to procure groceries or medicines.

The new Covid wave is being driven by widespread resistance to vaccines and the growing prevalence of vaccine and mask mandates. Austrian officials have said they will enforce a nationwide vaccine mandate in February, the first European nation to do so.

The opposition to the lockdown and vaccine mandates is being fueled in part by the far-right Freedom Party, which has used its platform in the Austrian Parliament to spread doubt about the effectiveness of the vaccines and to promote ivermectin, a drug typically used to treat parasitic worms that has repeatedly failed against the coronavirus in clinical trials.

But the fury is not limited to far-right activists, as the throngs that filled Vienna’s streets on Saturday attested. The police estimated the crowd at 40,000, with many families and others far outnumbering the right-wing extremists.

Nevertheless, many protesters brandished signs that compared the current Austrian government with the Nazis or that promoted racist conspiracy theories.

“When the anti-vaccine scene perceives the situation as a war, the logical consequence is a civil war,” Natascha Strobl, who has written extensively about the far right in Austria, said on the public broadcaster ORF.

Most Austrian marchers refrained from the violence seen in the Netherlands, where a protest against the government’s coronavirus measures descended into rioting in Rotterdam on Friday night, with attacks on the police and cars and bicycles set on fire.

The anti-mandate fury had been building in Austria for a week, after the government imposed a lockdown on the roughly two million people who were not vaccinated. The police, given the task of enforcing the measure, said the unvaccinated had become “clearly more radical,” Karl Nehammer, Austria’s interior minister, said on Sunday.

Further aggravating the crisis, the Austrian government fell into weeks of paralysis after Sebastian Kurz resigned as chancellor in early October amid a scandal, leading to infighting between his conservative followers and their partners in the governing coalition, the Greens.

Germany has been saddled with a similar power vacuum since elections in late September that reduced Chancellor Angela Merkel to caretaker status while her successor struggles to form a government.

A lead editorial for the Austrian newspaper Salzburger Nachrichten took the government in Vienna to task for allowing the situation to become so politicized, with warring camps viewing one another as the enemy and the opponents of vaccines dismissing scientific research as politically motivated.

“We have allowed that mistletoe-twig therapists are immensely popular and that alleged healers, layers-on of hands and preachers of hate have become acceptable against the modern researchers and pharmacologists,” Manfred Perterer, the paper’s editor in chief, wrote.

He called for all relevant groups — not just politicians, but scientists, cultural and social leaders — to engage in dialogue that would help ease some of the fears of those who are not vaccinated.

“Above all, the pandemic needs to be depoliticized,” Mr. Perterer said. “Communication needs to be clear again.”

Mr. Nehammer, the interior minister, echoed that idea on Sunday, saying that the “freedom” that many of the protesters insist they want can be achieved only through vaccination.

“It is not a question of ideology, it is a question of convincing; we can’t do and try enough to convince so that the unvaccinated get vaccinated,” Mr. Nehammer said.

The alternative could be the vaccine mandate that the Austrian government plans to introduce in February as a last resort. It’s not clear whether that would persuade people to get inoculated or further inflame opponents.

At least one vaccine skeptic lined up on Sunday with several dozen other people outside Vienna’s Christmas market in front of City Hall to receive their first jabs.

Georg Nichitut, who works in construction in Vienna, and his wife — who marched the previous day in the protest — were among those who waited nearly an hour for their shots.

Mr. Nichitut said he had questions that nobody had been able to answer about what would happen to him if he had side effects, or even what those might be. But to keep working, he said he reluctantly was surrendering on the vaccine.