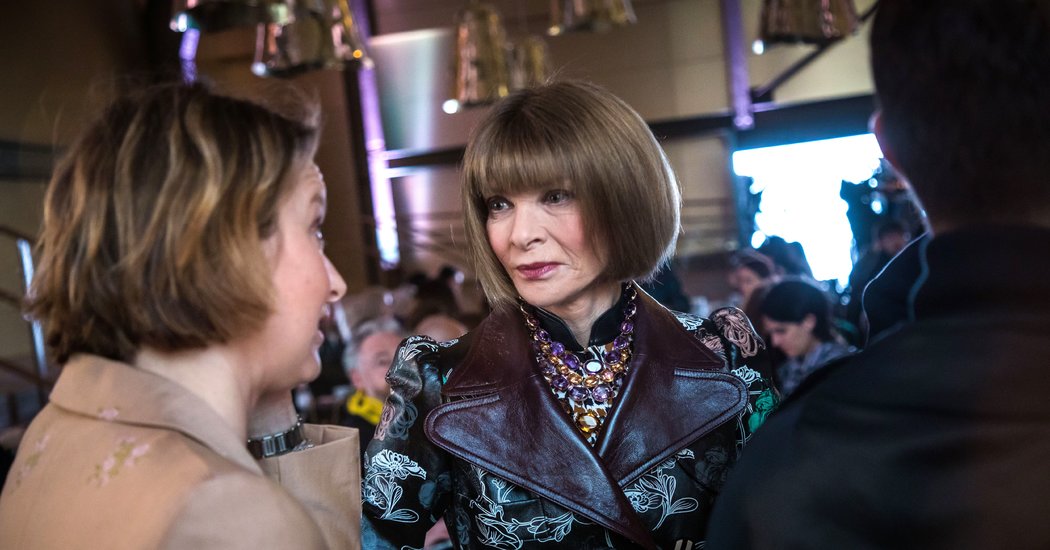 The coronavirus chased the fashion industry across Europe in February, from fashion week in Milan to fashion week in Paris, where designers handed out masks and some nervous fashion editors left early.

On Saturday the 29th, the team from InStyle magazine, owned by the Meredith Corporation, decided it was too dangerous to stay. The same day, Anna Wintour convened Condé Nast’s fashion staff in a makeshift conference room at the Paris Vogue headquarters. “The message from Anna was: This is not a big deal,” one attendee recalled (though a company spokesman denied she sent that message). Her editors, some nervous about the coronavirus, didn’t dare ask to go home.

“You wouldn’t challenge Anna in a group meeting — that’s just not how our operations work,” another editor said.

Ms. Wintour, the Vogue editor since 1988 who now runs much of Condé Nast’s U.S. operation, played her usual central role in Paris — and more. She stayed, she made arch jokes about people who had fled, and her regal presence by the runways sent a signal of support to the industry. When she got back to New York, some of her competitors self-quarantined, but she went to work and her staff didn’t need to be told they were expected to show up, too. She and her lieutenants worked out of the otherwise largely empty Condé Nast offices at One World Trade Center until the mayor sent the city home. It reminded Ms. Wintour’s longtime employees of how she had stoically led them back weeks after 9/11, producing photo shoots of models with patriotic bunting on rooftops.

But the coronavirus isn’t that sort of crisis. It’s a more dismal affair, preying on older and weaker companies as well as people. The theatrical flourishes and lavish lifestyles of the great media figures of a generation — from Ms. Wintour to Donald Trump — seem ill suited to the moment. These days, even the most charismatic executives are doing Zoom calls in their sweatpants.

Paris, rather than becoming a moment when Ms. Wintour saved her two treasured industries — magazines and fashion — now looks a bit more like the last stand for her leadership style, for a personal brand larger than her company’s, and for Condé Nast’s long, legendary 20th century. The crisis is set to sweep aside the vestiges of a more luxuriant media age.

“There were trends that were already happening, some positive and some negative,” Ms. Wintour’s boss, the Condé Nast chief executive Roger Lynch, told me Friday. “And the crisis is just accelerating all those.”

The negative trends — the collapse of print and of advertising — arrived at Condé Nast in 2008, and haven’t relented since. Now they’ll hit Ms. Wintour and Vogue particularly hard. The fashion magazine is Condé’s most lucrative U.S. publication. But it is also almost entirely dependent on advertisements that Ms. Wintour, through sheer force of personality, has kept coming in from fashion houses as virtually every other print category collapsed. Clothing is now the hardest-hit sector of the devastated retail industry.

Mr. Lynch, 57, who spoke to me via Zoom from his house in Lake Arrowhead, Calif., is responding to the crisis with a mix of sharp spending cuts and some increased marketing for subscriptions as traffic swells to Condé’s newsier brands.

Still, the subscriptions to all the company’s magazines, other than The New Yorker, remain cheap, as they were when the goal was simply to pump up circulation numbers for advertisers. And nobody knows what will happen if they are forced to raise prices to compensate for lost ad revenue.

But the coronavirus crisis is clearly reordering the priorities at what the Condé chairman, Jonathan Newhouse, once referred to as “the Vogue Company.” Now its fortunes depend on whether The New Yorker — now the strongest business in the company — and Wired can keep pace with the red-hot Atlantic, and on Bon Appétit feeding and entertaining the homebound masses. Nobody is putting on a Givenchy cape anytime soon.

Mr. Lynch, the former chief of Pandora, comes from the alternate world of the tech industry. He talks passionately about corporate strategy and plays in a classic rock cover band called the Merger. He arrived in 2019 at a business still shaped by the legacy of the Newhouse family, which had turned a workaday newspaper fortune into a glamorous and glossy magazine publishing house. The company drifted through the internet age until the death of the magnate S.I. Newhouse in 2017, the same year Edmund Lee reported in The New York Times that Condé had lost $120 million.

Mr. Lynch’s hiring signaled Condé’s shift away from family passion project to a more professional era, suggesting to many observers that they will eventually sell the media company — though the family staunchly denies that. While the Newhouses still dominate the board of its parent company, Advance, they added outside directors for the first time last summer. Their billions no longer depend on Condé Nast — they have big stakes in the cable television businesses — and they have diversified further, even spending $730 million to buy the endurance sports company Ironman Group as the coronavirus shut down its events.

“I think most people think about Condé Nast in the context of the old Condé Nast. I mean, it’s a big magazine business, a lot of drama, a lot of excess,” he said. “That’s just not the company today.”

In reality, Mr. Lynch is scrambling to create a business model that does not yet exist, with no guarantee that there’s any way to stop the bleeding. Condé operates huge YouTube channels and considers itself the platform’s “largest premium publisher” — but the reason there aren’t many others is because those videos cost a lot to make, and often don’t earn it back. GQ China operates the biggest commercial channel on the social platform WeChat, publishing viral comics at a higher margin — but at a different kind of cost: British GQ pulled Xi Jinping off its “worst dressed” list last year for fear of giving offense.

And it is contending with broader social and generational shifts that make its culture of casual drama and cruelty seem a poor fit for the values of its unionizing, millennial work force. Ms. Wintour’s former editor-at-large André Leon Talley drew headlines last week for writing in his new memoir that she left him with “vast emotional and psychic scars,” prompting another designer to call her “santanic” in an Instagram screed. (Joseph Libonati, a Condé spokesman, said “Anna wishes Andre only the best.”)

Ms. Wintour has also been slow to adjust to changing cultural norms, playing catch-up rather than leading on everything from calling people fat to wearing fur to her friendship with Harvey Weinstein and his wife. She was said to be in line to be Hillary Clinton’s ambassador to London.

In 2017, those same cultural and economic forces resulted in the departure of the Vanity Fair editor Graydon Carter after 25 years, leaving only Ms. Wintour and the New Yorker editor David Remnick from the ranks of imperial editors. (When Condé Nast promptly cut Vanity Fair’s budget by a reported $14 million after Mr. Carter’s exit, the lesson, said one Vanity Fair employee, was simple: “Protect your boomer.”)

The new editor, Radhika Jones, wrenched the publication abruptly into the politics of a new generation, away from baby boomer power structures and toward scathing pieces on surf mom influencers and Robert Kraft’s massage parlor scandal. Her bumpy transition, along with Ms. Wintour’s elevation to broader roles managing most American editors — her titles since 2019 include artistic director for the company and global content adviser — showed that the old guard wasn’t quite ready to ease its grip. And nobody has quite determined what a post-boomer-led Condé Nast looks like.

Ms. Wintour has backed Ms. Jones, and regularly drops down from her vast office to the Vanity Fair editor’s smaller windowless one. When I asked Mr. Lynch whether he’d renew Ms. Jones’s contract this summer, he demurred, saying, “Radhika works for Anna.” (Ms. Wintour said, through a spokesman, that Ms. Jones was “the right leader for the title.”)

The bigger question may be what becomes of the glossy magazines in whatever new age we are entering. Condé Nast is the defining brand of American inequality; its original slogan was “class not mass.”

Now it is entering a grim period of austerity. Editors have drawn up lists of employees they expect to lay off, and are figuring out how to relate to them in the meantime so they won’t be surprised by the call from H.R.; its more tightly run rival, Hearst, has avoided those measures. Executives have taken salary cuts — 50 percent for Mr. Lynch; 20 percent for Ms. Wintour, who has also begun a campaign, A Common Thread, aimed at helping the fashion industry with which her future, and Vogue’s, remains inextricably linked.

The only people with nothing to fear appear to be the veterans of the glory days, when senior editors were promised pensions for life equivalent to more than half of their generous salaries. Three former executives, including Mr. Carter, who now runs an upscale newsletter called Airmail from the south of France, said the company’s current woes had not affected their paychecks. Robert Gottlieb, who was fired by his good friend Si Newhouse from The New Yorker in 1992, told me the checks have been coming steadily ever since.

“I get a notification every three years or so if there’s been some inflationary upturn in my income from a person I don’t know,” he said.