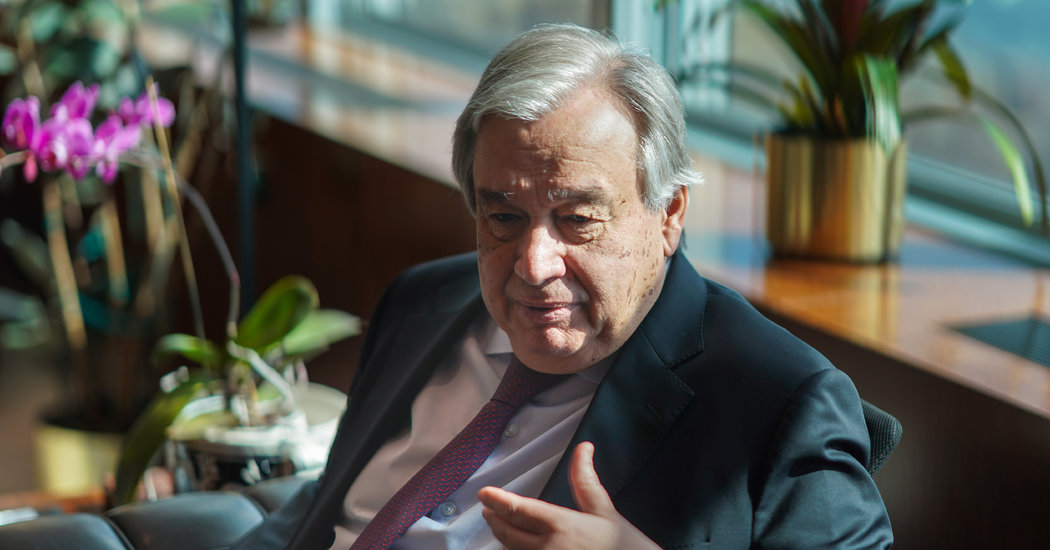 [In Her Words is available as a newsletter. Sign up here to get it delivered to your inbox.]

The secretary general of the United Nations doesn’t just call himself a feminist. Since becoming the world’s top diplomat in 2017, António Guterres has worn that title like a badge.

He does not shy away from terms more commonly found in feminist parlance — “mansplaining,” “patriarchy” and “male-dominated world,” among them. And in a recent speech, he did not put too fine a point on his views about gender inequality.

“Stupid,” he branded it, and an obstacle to peace and security.

Still, despite broad calls for the U.N. to be overseen by a woman when Mr. Guterres was seeking the job (at the time of his election, more than half the 13 candidates were women), in the end member states went with him. And so whatever his views, Mr. Guterres remains both symbol and product of a male-dominated organization.

His focus on gender, however, is a “radical step forward from what we’ve seen in the past,” said Lyric Thompson, the director of policy and advocacy at the International Center for Research on Women, a Washington-based advocacy group that has closely tracked the secretary general’s tenure and suggests improvements.

Under Mr. Guterres’s watch, the U.N. has achieved gender parity at the most senior levels of management, two years ahead of a schedule that he himself set, and he has plans to bring parity to all levels of the organization by 2028.

For positions that the secretary general has the power to fill, Mr. Guterres demands candidate rosters that are equally split by gender, and for positions he doesn’t directly appoint, like the U.N.’s representatives around the world, he asks that hiring managers do the same. He is the first secretary general to have a dedicated gender adviser on his executive team.

In response to allegations of sexual abuse and exploitation inside the organization, and at the hands of the U.N.’s peacekeepers and agencies, he set up an internal, all-female sexual harassment investigation team (or “brigade,” as he calls it); appointed a victim’s rights advocate to his cabinet; and set up so-called immediate response teams to speed up the process of starting an investigation.

Critics say Mr. Guterres, the former prime minister of Portugal, hasn’t done enough to push for gender equality in countries where progress has stalled, or even been reversed. Three years into his term, the U.N. has failed to bolster financing for on-the-ground programs for gender equality and for U.N. Women, its sole agency dedicated to gender issues.

More broadly, Mr. Guterres has been criticized for not calling out serious human rights abuses in specific countries. “He speaks almost invariably in broad generalities,” Human Rights Watch said in 2019.

Mr. Guterres sat down with The New York Times in his office at the U.N. to discuss his record on gender.

The following interview has been edited for clarity and length.

You’ve described yourself several times as a feminist. What, exactly, makes you a feminist?

I started my social work as a volunteer in the slums of Lisbon. And it was clear to me that in situations of dramatic poverty, women were paying the highest price. Family violence was extremely common and alcoholism was prevalent and women became victimized in many, many circumstances.

Then when I was in my political life, I felt the huge pushback of men in relation to women’s participation. That’s when we established quotas in my party and tried to establish them in Parliament. But we were defeated.

When I was prime minister, we tried to put family violence very strongly on the agenda [but] there was a huge pushback from society, which was a demonstration of a male-dominated culture.

Then when I came to the United Nations, I detected that even this organization was very strongly male dominated. And I understood that I had to act decisively to break this kind of straitjacket.

You beat out seven women to become secretary general. Has that colored your tenure?

No. But what was clear to me is that there were some structural issues that would need to be a very strong priority: gender, inequality and climate change. I mean, this seems to permeate all areas of activity.

What do you think is the greatest barrier to gender equality?

The fact that we have a male-dominated world, and many men don’t even realize this. Many men take for granted the world as it is, and they look at gender equality as almost an aberration. I just read a very interesting essay on mansplaining, which means when men explain to women how things should be. Many men just think that it’s normal.

This patriarchal structure of society is still deeply rooted and needs to be very strongly shaken. That’s why I don’t like to say the “empowerment of women” because it looks like men are empowering women. Women need to be able to take power.

You have been criticized for failing to call out any countries that lag behind on gender issues. Why haven’t you singled them out?

U.N. Women has important reports on all these situations. One of our priorities is to push governments to understand that these things are no longer acceptable.

How do you hold each nation to account while also factoring in where they are culturally, politically?

We cannot transform Saudi Arabia into Sweden, we know that. But it’s important that we have steps to diminish the very high discrimination women have in Saudi Arabia. And even in Sweden, there might still be some improvements that can be made. It is my sort-of obsession, my central idea, to do everything possible to change this male-dominated culture.

But what kind of leverage do you have?

Sometimes the leverage comes through alliances with civil society. Sometimes it comes by just exposing the situation.

Why not make room for a woman secretary general when your term is up?

It doesn’t depend on me if my successor will be a woman or a man — I cannot guarantee that when I leave, a woman will come. So this is a matter, to be honest, I have not thought about.

I think you are a fan of quotas. …

No, I fought for quotas in the past. Here it is parity.

In the spirit of gender equality, we’re going to ask you a few questions that female leaders get asked all the time. First, how do you balance work and life?

This should not be a female leader question. It should be an everybody question. But it is true that in our societies, much of the efforts of managing home affairs, I would say, still fall on the women.

What designer are you wearing?

What designer are you wearing today? Your tie, your clothes?

I have to check.

The tie is Hermès. It’s a good tie. The suit is a Portuguese manufacturer, named Wesley. And the shoes are Sebago.

But it is true — this is exactly one of the things that is asked to women and less to men. Even when women get to power in some aspects, they are still kind of … not prisoners … but limited by this default man approach. But that is changing.

This article is from In her Words, a Times newsletter on women and gender. To sign up, visit nytimes.com/inherwords