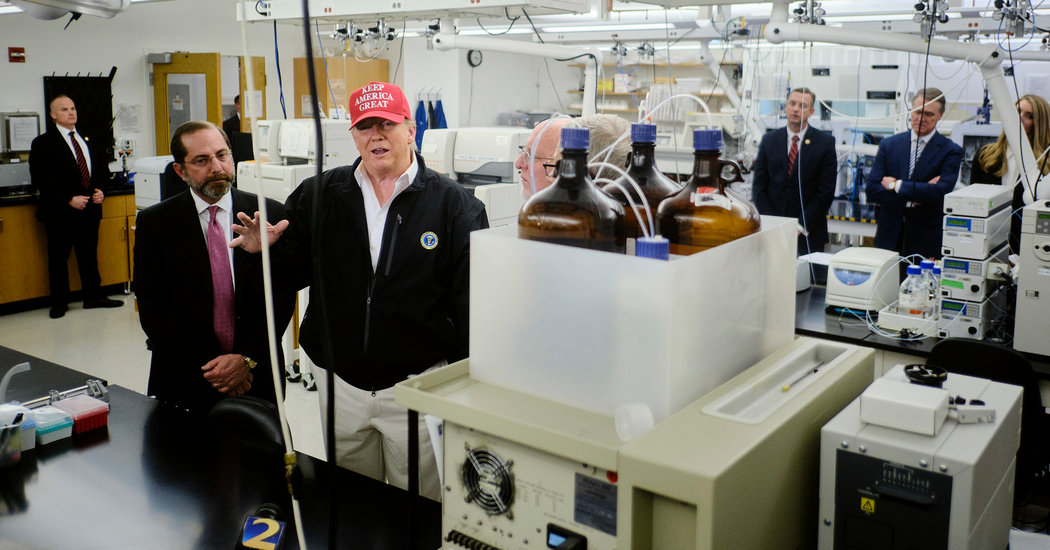 WASHINGTON — The Trump administration on Saturday continued sending contradictory signals about its response to the coronavirus, as a top federal health official appeared to walk back President Trump’s claim that “anyone who wants a test can get a test.”

The health and human services secretary, Alex M. Azar II, cautioned that only those who have gone through a doctor or medical professional can be approved for a test, a message that appeared to undercut Mr. Trump, who delivered his promise on Friday as he toured the Atlanta headquarters of the Centers for Disease Control and Prevention.

“You may not get a test unless a doctor or public health official prescribes a test,” Mr. Azar said at an off-camera briefing at the White House. “That is our medical system in the United States, in the same way that you may not get a cardiac medicine if your doctor doesn’t prescribe that.”

Mr. Azar’s comments were another instance of key officials in recent days correcting or clarifying Mr. Trump, who has sought to project calm and preparedness as the coronavirus continues to spread in the United States. More than 100 new cases were announced in the United States on Saturday, including two deaths in Washington State and dozens of new cases in New York State.

The communications clash between the president and top officials overseeing the federal government’s response to the coronavirus could obscure valuable knowledge about it, said Dr. Joshua M. Sharfstein, the author of “The Public Health Crisis Survival Guide: Leadership and Management in Trying Times.”

“Things change in a crisis — the advice may change in a crisis,” said Dr. Sharfstein, a former top F.D.A. official who teaches a class on the topic at the Johns Hopkins Bloomberg School of Public Health. “And so it’s really important for the public to have confidence in the messages and the messengers so that they understand and believe new information and advice.”

Mr. Azar on Saturday defended Mr. Trump’s phrasing, saying it reflected a recent shift by federal health agencies, which have loosened testing regulations. The C.D.C on Wednesday lifted all restrictions on testing for the coronavirus.

“What the president said yesterday at the C.D.C., that is consistent with what the F.D.A. and the C.D.C. are saying, which is we as regulators, or as those shipping the test, are not restricting who can get tested,” Mr. Azar said. “We are leaving that to the professional judgment of doctors and public health officials.”

“What he meant to say is we’re not in the way of that,” Mr. Azar said. “And he knows the numbers. We brief him daily.”

Mr. Azar’s assertion echoed one made by Vice President Mike Pence at a White House news conference Friday evening, in which the vice president said that doctors treating potentially symptomatic Americans could contact local officials and have state labs do the testing.

During a visit to the mask producer 3M in Minnesota on Thursday, Mr. Pence acknowledged the constraints of testing. “We don’t have enough tests today to meet what we anticipate will be the demand going forward,” he said.

In recent weeks, Mr. Trump has remained publicly upbeat, minimizing the potential consequences of the virus, which he has said could disappear this spring in warmer weather. “A vast majority are going to be fine,” the president said on Friday about Americans who have the virus, portraying it as similar to the flu.

“I’m not concerned at all,” the president said on Saturday when asked about the coronavirus getting closer to the White House.

On Friday, Mr. Trump characterized the government’s testing aptitude as “amazing” and called the C.D.C.’s test “perfect,” statements that have been roundly disputed by scientists and health officials who have expressed alarm over the speed with which the C.D.C. has tested and over the quality of its tests.

Consistent messaging, Dr. Sharfstein said, helps with the “fear of the unknown.”

“Testing is a more confusing topic than it can seem,” he said. “People can be overly reassured by a negative test or overly panicked by a positive test. Having a thoughtful approach to testing is important.”

The number of people who can be tested for the coronavirus and the number of tests available are fluid, federal officials said on Saturday at the White House briefing.

Dr. Stephen Hahn, the F.D.A. commissioner, said that 1.1 million tests had been shipped to private health labs as of Friday evening, and hundreds of thousands more were being surveyed for quality at the C.D.C. on Saturday. He said that between public health labs and C.D.C. tests, the total number of samples that have been tested was over 5,860.

Pressed over whether an ill person who consults a doctor and is recommended for a test can get one in a timely way, Mr. Azar said on Saturday that “there’s no reason that should not happen.”

Doctors and patients across the nation have painted a much different picture of availability, clamoring for tests they believe are in short supply. In California, only 516 tests had been conducted as of Thursday. Health officials in Washington State have more cases than they can currently process. In New York City, officials have pleaded for more test kits from the C.D.C.

State officials facing a growing number of cases criticized the Trump administration this weekend for what they described as its contradictions. Gov. Andrew M. Cuomo of New York said that he was “battling” mixed messages from the federal government.

“That confusion, I think, adds to the fear and the frustration of people, because if government doesn’t know what it’s doing, well then people feel they’re really alone,” Mr. Cuomo added.

After Mr. Pence visited Washington State this week to signal the administration’s support for the state, where 14 deaths have been connected to a nursing home in the Seattle area, he praised its governor, Jay Inslee. Mr. Trump then called Mr. Inslee a “snake.”

“Let me just tell you we have a lot of problems with the governor,” Mr. Trump said in Atlanta on Friday. “So Mike may be happy with him, but I’m not, OK?”

Mr. Inslee wrote on Twitter that it was “important for leaders to speak with one voice.”

“I just wish the president and vice president could get on the same page,” he said.

Mr. Trump has also sought to contain public alarm by registering fewer cases of the coronavirus, a decision that public health experts say risks misleading Americans about where the virus has spread. The president said he would prefer not to let 3,533 people on a cruise ship held off the coast of San Francisco to disembark onto American soil, even if they were placed into quarantine, in part because it would inflate the number of American infections. Nineteen crew members and two passengers of the ship have tested positive for the coronavirus.

Two passengers on the ship, Cookie Clark, 76, and her husband, Joe Clark, 81, of Oakdale, Calif., said they had been watching the news constantly and were angry when they heard Mr. Trump say on Friday that he preferred the ship not dock in the United States.

“As American citizens, we have a right to be back on U.S. soil,” Mr. Clark said.

Ms. Clark, a retired realtor, said she was appalled. “We’re just numbers to him,” she said.

Josh Michaud, an associate director for global health policy at the Kaiser Family Foundation, said that it was in the public’s interest to know where cases of the virus were as soon as possible.

“That’s going to be the foundation for developing an effective response. You need to know where the disease is to erect the resources,” Mr. Michaud said. “If you don’t, you’re flying blind.”