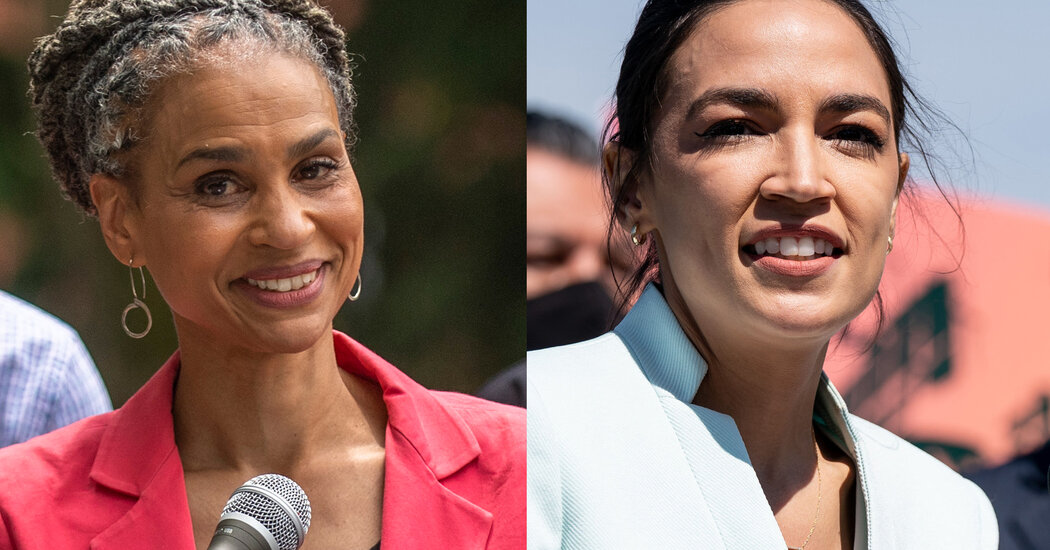 Ms. Ocasio-Cortez’s endorsement on Saturday may cement Ms. Wiley as the left-wing standard-bearer in the New York City mayor’s race.

Representative Alexandria Ocasio-Cortez, one of the most prominent left-wing leaders in the country, endorsed Maya D. Wiley in the race for New York City mayor on Saturday, urging voters to “come together as a movement.”

Ms. Ocasio-Cortez’s endorsement represents the most significant development yet in left-wing efforts to shape the June 22 Democratic primary that is almost certain to determine the city’s next mayor.

“If we don’t come together as a movement, we will get a New York City built by and for billionaires, and we need a city for and by working people,” Ms. Ocasio-Cortez said outside City Hall in Manhattan, as Ms. Wiley waited in the background. “So we will vote for Maya No. 1.”

Ms. Ocasio-Cortez’s endorsement of Ms. Wiley, a civil rights lawyer and former counsel to Mayor Bill de Blasio, comes at a moment of extraordinary volatility in the mayor’s race — one week before early voting begins.

Eric Adams, the Brooklyn borough president, has increasingly been seen as the Democratic front-runner in the race, in close competition with Andrew Yang, the former presidential candidate. Kathryn Garcia, the former sanitation commissioner, has also demonstrated growing traction. All three candidates are considered relative moderates on issues including policing and their postures toward the business community.

Ms. Wiley has generally been considered part of the top tier of candidates, too, but she has not been seen as a front-runner throughout the race. In recent weeks, however, she has landed a growing number of endorsements, especially from the left.

On Saturday afternoon, Representative Jamaal Bowman, another left-wing New York Democrat who is close to Ms. Ocasio-Cortez, wrote on Twitter that he, too, was supporting Ms. Wiley.

But for months, it was Ms. Ocasio-Cortez’s decision that had been one of the most consequential open questions in the mayor’s race.

Surrogates for various candidates pitched her team. Representative Nydia M. Velázquez, a Wiley backer, encouraged Ms. Ocasio-Cortez to meet with the candidate directly. And Ms. Wiley said that she and Ms. Ocasio-Cortez had had conversations over Zoom and by phone.

But, like the rest of New York City, Ms. Wiley received almost no advance notice that Ms. Ocasio-Cortez intended to endorse her on Saturday, she said. The congresswoman made the announcement following a scheduled rally with City Council candidates.

“I found out right before I came down here,” Ms. Wiley said in a brief interview after the event. “I was extremely excited when she called me and said: ‘You’re my No. 1. Let’s talk about how we do this.’”

For months, it was unclear whether Ms. Ocasio-Cortez, 31, would use her platform to influence the mayor’s race. Sparse public polling and interviews with party strategists suggested that a significant number of voters remained undecided, and Ms. Ocasio-Cortez’s endorsement most likely cements Ms. Wiley as the liberal standard-bearer in the contest and could signal a new measure of viability around her campaign.

The endorsement may also provide a boost to the left wing of the Democratic Party, which, despite significant recent victories at the congressional and state legislative levels in New York, seemed to be at a disadvantage in the mayor’s race as leaders and activists struggled to coalesce around a single candidate.

On several issues, but especially on matters of policing, Ms. Wiley has positioned herself to the left of Mr. Adams, Mr. Yang and Ms. Garcia, and her candidacy will offer an important test of how potent that pitch is among Democratic voters who want to rein in police misconduct but are also concerned about rising violent crime.

Ms. Ocasio-Cortez did not mention Mr. Yang or Mr. Adams by name, but she blasted the “dark money” shaping the race — both have attracted controversy over donors to their super PACs — and she implicitly warned against candidates who support what she cast as overpolicing. (Ms. Wiley also has independent expenditure support.)

“And what that got us was a New York that was harder to afford and a New York that criminalized young people and put them into lifelong carceral cycles,” she said. “It ends now.”

“These are the stakes,” she continued. “Maya Wiley is the one. She will be a progressive in Gracie Mansion.”

Ms. Ocasio-Cortez has publicly rebuked Mr. Yang twice during the race: once after he laid out his plan to support a “Green New Deal for public housing,” and again following remarks he made about Israel. She indicated that she might announce “further ranks” before New York City’s ranked-choice voting election, but it would stun many political observers if Mr. Yang or Mr. Adams made her list.

Ms. Wiley’s campaign has promoted a number of progressive policy proposals, including cutting $1 billion from the police budget and trimming at least 2,250 officers; helping poor families pay for child care by offering $5,000 grants to caregivers; and giving subsidies to low-income New Yorkers to help pay for rent. She is seeking to build a coalition that includes voters of color from across the ideological spectrum and white progressives.

Minutes after the endorsement was announced, Mr. Adams — who, more than any candidate, is running on the issue of public safety, casting it as the “prerequisite” to prosperity — released a statement blasting Ms. Ocasio-Cortez and Ms. Wiley over the issue of police funding.

“Rep. Ocasio-Cortez and Maya Wiley want to slash the Police Department budget and shrink the police force at a time when Black and brown babies are being shot in our streets, hate crimes are terrorizing Asian and Jewish communities, and innocent New Yorkers are being stabbed and shot on their way to work,” said Mr. Adams, a former police officer. “They are putting slogans and politics in front of public safety and would endanger the lives of New Yorkers.”

In a statement, Ms. Wiley accused Mr. Adams of taking a “reactionary approach to public safety” and said that he was using right-wing talking points.

Many left-wing activists and leaders have been divided over how to approach the mayor’s race. Some backed Ms. Wiley; others supported Scott M. Stringer, the city comptroller, or Dianne Morales, a former nonprofit executive. But in recent weeks, Mr. Stringer and Ms. Morales have struggled with controversies, and some of their backers have rescinded their endorsements.

Mr. Stringer has faced two accusations of making unwanted sexual advances decades ago. He denied wrongdoing in one instance. On Friday, in response to a New York Times report about a second accusation of harassment and unwanted advances, he said that he did not recall the woman making the allegations but that he apologized if he had met her and made her uncomfortable.

He has lost a number of high-profile left-wing endorsers, including Mr. Bowman.

Ms. Morales’s struggles center on a campaign implosion, as staff members accused the campaign of not living up to its left-wing ideals, senior members departed and battles over a late-stage union drive unfolded.

“We can’t afford to not engage because of what could have been,” Ms. Ocasio-Cortez said on Saturday. “We engage in the world that we have. And we do everything we can to make that world better. We have a choice to make New York City better.”