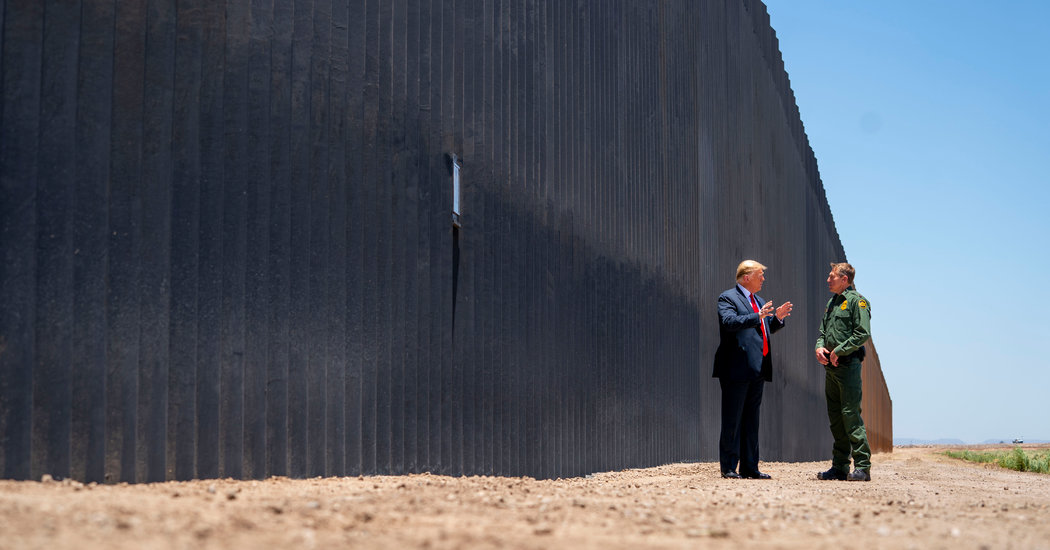 LOS ANGELES — A federal appeals court on Monday struck down President Trump’s policy that barred most migrants from seeking asylum in the United States if they had passed through another country, concluding that the government did “virtually nothing” to make sure that another country is “a safe option” for those fleeing persecution.

A three-judge panel of the United States Court of Appeals for the Ninth Circuit in San Francisco affirmed the decision of a federal judge who ruled last year that the so-called third-country transit rule was unlawful, with one judge calling it “perhaps the most significant change to American asylum in a generation.”

The ruling was an interim but important step. In September, the Supreme Court had allowed the Trump administration’s rule forbidding most Central American migrants from seeking asylum in the United States to take effect while the appeals courts deliberated its legality.

That stay remains in place until the Supreme Court takes up the case or the Trump administration abandons the policy. In the meantime, nearly all asylum seekers have been temporarily blocked from entering the country under a separate administration directive, issued as a result of the coronavirus pandemic, that closed the border to all but United States citizens and lawful permanent residents.

Still, Monday’s opinion was an important legal milestone, a 66-page opinion that found serious legal deficiencies in one of the administration’s signature immigration policies.

“The Trump administration is sure to appeal to the U.S. Supreme Court,” said Stephen Yale-Loehr, a professor of immigration at Cornell Law School.

The transit rule was issued jointly by the Departments of Justice and Homeland Security in July 2019, when thousands of migrant families were pushing toward the southwestern border, many of them seeking asylum from violence in Central America. Countering decades of law and policy, under which the United States had long provided refuge in such cases, it declared that any migrant who passed through another country en route to the border would be ineligible for asylum, with few exceptions.

The policy required migrants traveling over land from El Salvador, Honduras or other countries to apply for and be denied asylum by Mexico, Guatemala or another country through which they traveled before they could be eligible to make a claim for protection in the United States.

If they did not, those who managed to reach the United States would be automatically considered to lack a credible fear of persecution in their home countries.

The appeals court said there was evidence that contradicted the administration’s assertion that migrants could obtain safe protection in Mexico and other countries.

It also said the administration had not justified its assumption that a person who failed to apply for asylum in a third country was unlikely to have a meritorious claim.

Judge Miller concurred in part and dissented in part, writing that the federal agencies’ “deficient” justification for the transit rule was “particularly troubling because the rule represents such a major change to policy — perhaps the most significant change to American asylum in a generation.”

The main opinion said there was “no evidence in the record” to support the rule’s assumption that migrants who do not apply for asylum in Guatemala or Mexico en route from, say, El Salvador or Honduras, can be assumed to lack a credible fear of persecution in their home country.

“This ruling says very simply that Congress is in control of asylum, and the administration cannot act unilaterally to destroy our asylum system,” said Lee Gelernt, the lawyer with the American Civil Liberties Union who argued the appeal on behalf of several groups challenging the rule.

Neither the Justice Department nor the Department of Homeland Security had any immediate comment on the decision.

In a related case this month, a federal judge in the U.S. District Court for the District of Columbia ruled that the administration had illegally put into place the transit rule by not allowing public comment first.

That decision resulted in a suspension of the transit ban on more narrow grounds.

The order that effectively closed the border to asylum seekers, using the coronavirus pandemic as justification, is being challenged in a federal court in Washington.