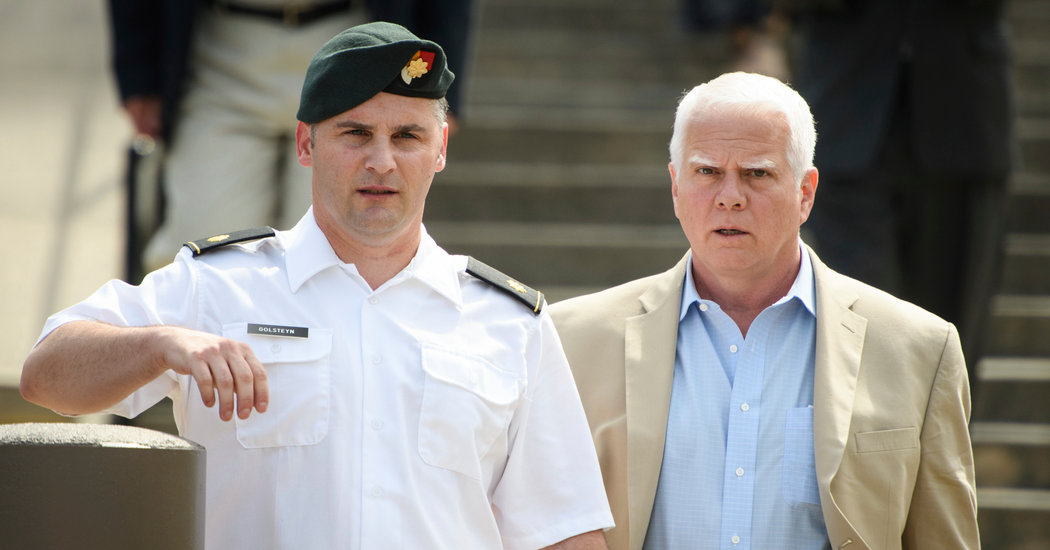 An Army major charged with murder but pardoned in November by President Trump learned on Thursday that the Army has rejected his request to be restored to membership in the elite Green Berets, setting up a potential clash between senior Army leaders and the commander in chief.

Maj. Mathew L. Golsteyn received a letter on Thursday informing him that his request that the Army restore his Special Forces tab, which denotes membership in the elite force, had been denied in early December, according to his lawyer, Phillip Stackhouse.

Mr. Stackhouse said in an interview that the Army’s decision appeared to be a direct rebuke of Mr. Trump’s wishes, and that he would appeal the decision directly to the White House.

“I don’t think the president could have been more clear in what he wants,” Mr. Stackhouse said.

Major Golsteyn was charged in 2018 with murder over the killing of an Afghan man during a deployment to Marja, Afghanistan, in 2010. Major Golsteyn described the man as a suspected Taliban bomb maker and twice admitted killing him, but he maintained that the killing was part of a legal ambush set up to save lives. He had been scheduled to go on trial last month.

After the initial investigation into the killing began, the Army stripped him of his Special Forces tab, and rescinded a medal that the Army had approved for him but had not yet presented, the Distinguished Service Cross.

But Major Golsteyn never went on trial because, in November, he was granted clemency by Mr. Trump, along with another Army officer, Lt. Clint Lorance, who was convicted of second-degree murder in 2013, and Chief Petty Officer Edward Gallagher, a Navy SEAL who was acquitted of murder last summer but convicted of a lesser war crime.

Mr. Trump has repeatedly praised Major Golsteyn and in December appeared with him at a campaign fund-raiser.

A week after Mr. Trump gave Major Golsteyn a full pardon, Mr. Stackhouse sent a letter to Army officials arguing that the clemency should include relieving all adverse actions against his client.

“I’ll remind you that the President has directed that Major Golsteyn’s record be ‘expunged’ during his call with Major Golsteyn, Vice President Pence, and White House Counsel Pat Cipollone,” he wrote. Additionally, he said, Mr. Trump had explicitly stated that the major should be “allowed everything, just as if this never happened.”

Mr. Stackhouse said that the decision by Lt. Gen. Francis M. Beaudette, the commander of the United States Army Special Operations Command, to deny the major’s request happened on Dec. 3 but that Major Golsteyn was not notified until Thursday.

The decision was earlier reported by The Washington Post.

A similar standoff played out in December when the Navy tried to start the process of taking away Chief Gallagher’s Trident pin, which signifies membership in the SEALs. Chief Gallagher’s lawyer appeared on Fox News and appealed to Mr. Trump, who, within minutes, posted a message on Twitter: “The Navy will NOT be taking away Warfighter and Navy Seal Eddie Gallagher’s Trident Pin. This case was handled very badly from the beginning. Get back to business!”

When senior Navy leaders pressed the issue, Navy Secretary Richard V. Spencer was forced to resign. Though both Chief Gallagher and Major Golsteyn are decorated Special Operations troops who have enjoyed the vocal backing of the president, there are important differences in their cases.

Chief Gallagher has denied the killings he was accused of, and was acquitted by a jury of all charges but one: posing for a photo with the body of a dead captive. In granting clemency to Chief Gallagher, the president did not issue a full pardon, only a reduction in punishment that allowed Chief Gallagher to keep his rank.

Major Golsteyn admitted to killing an unarmed man he suspected was a bomb maker, first in a job interview with the C.I.A., which sparked an internal investigation, and then in an interview on Fox News in 2016. After the televised interview, the Army charged Major Golsteyn with murder. He entered a not-guilty plea but before he could stand trial, the charges were erased by the president.

President Trump has warned before that he would intervene in the Golsteyn case, saying on Twitter in 2018, “At the request of many, I will be reviewing the case of a ‘U.S. Military hero,’ Major Matt Golsteyn, who is charged with murder.”

The Army said in a statement that the president granted a pardon for the murder charges. The statement noted that the decision to revoke the Special Forces tab and Distinguished Service Cross took place in 2014, long before the criminal charges.

Mr. Stackhouse said he would not be surprised if the president reverses the Army decision as quickly as he reversed the decision on Chief Gallagher.

“We’ve already seen the Department of Defense attempt to take this type of action,” he said. “Why is this any different?”