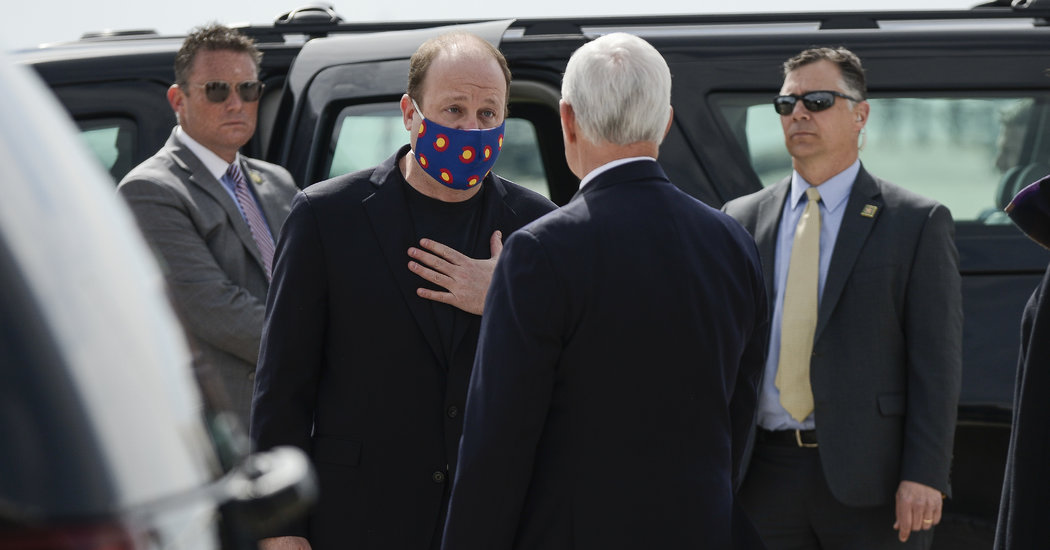 WASHINGTON — When Vice President Mike Pence descended onto the tarmac in Colorado Springs last Saturday, his first appearance outside the White House grounds in over a month, he was greeted by the Democratic governor of Colorado, Jared Polis, who was wearing a face mask emblazoned with images from his state flag.

Mr. Pence tapped elbows with Mr. Polis, rather than offering a hand, but he kept his face uncovered, a decision in line with President Trump’s position: Mr. Trump said this month that he would not follow guidelines from his own Centers for Disease Control and Prevention and wear a face mask.

The tarmac photo opportunity between two elected officials in various states of facial undress underscored how politicians are, or aren’t, modeling the precautions they have recommended to their constituents.

For the most part, top officials — from governors and mayors to Mr. Trump and his team — have chosen not to use masks, at least in public or at televised events, even as they encourage people to wear them. Some political analysts say image-conscious politicians may resist masks, even if they are warranted, for fear that the coverings might make them look pessimistic or nervous.

But leaders inevitably risk looking hypocritical by preaching a message about masks and then forgoing, especially when they are surrounded by aides and others. Health experts say modeling behavior is the right thing for public officials to do.

“If you’re instructing people to do stuff and you yourself aren’t doing it, that often sends the wrong message, and that’s an inconsistency in the guidance,” said Dr. Amesh Adalja, an infectious disease physician and senior scholar at the Johns Hopkins Center for Health Security.

For leaders who do seek to promote best practices, they face the possibility of appearing alien to Americans who have yet to grow accustomed to wearing masks. Bill de Blasio, the Democratic mayor of New York City, for instance, was mocked for looking like an “Old West bank robber” after covering his face with a bandanna while leaving a news conference this month. And Gov. Ron DeSantis, Republican of Florida, committed a gaffe when he tried to put on an N95 mask in public and left one of the straps dangling from his chin.

Political advisers acknowledged that more might go into the decision to don a mask than the advice of health experts. “Masks, whether worn by superheroes or villains, hide your identity,” said Philippe Reines, a longtime aide to former Secretary of State Hillary Clinton. “Not always a good idea when you’re selling yourself.”

The decision of whether to appear in public in a face mask does not seem to break down by political party, or by whether a lawmaker represents one of the hot spots of the outbreak.

For instance, Gov. Mike DeWine of Ohio, a Republican, has been wearing a mask in public since the C.D.C. put out its recommendation, while Gov. Gavin Newsom of California, a Democrat, has defended his decision not to cover his face during news conferences. Both governors lead states with widespread outbreaks of the coronavirus.

Gov. Gretchen Whitmer, Democrat of Michigan, was photographed in a mask on April 14 while she toured an alternative care facility.

Last weekend, Gov. Andrew Cuomo of New York, a Democrat who recently issued an executive order requiring New Yorkers to wear a mask in many public places, was seen leaving his house for a walk with what appeared to be a bandanna tied around his face, the first time the public had seen him cover up.

His rule of thumb, aides said, is to wear a mask or face covering, in public or in private, whenever he is less than six feet from anyone else. That doesn’t include his daily news conference, where reporters and government officials sit far apart from one another.

Mr. DeSantis was slow to shut down his state but quicker to don a mask in public, being photographed wearing one on April 8.

Several other governors have worn face coverings in public, including Larry Hogan of Maryland, a Republican, and J.B. Pritzker of Illinois and Jay Inslee of Washington, both Democrats.

“I’ve been wearing a mask when I go out,” Mr. Pritzker told reporters on April 5, after entering the briefing room with his mouth and nose covered. “I did it this morning when I was out, and I did it when I came here.”

Gov. Philip D. Murphy of New Jersey, also a Democrat, said at a news conference this month that he had taken his mask off “because otherwise I’m not sure you’d be able to understand us.”

“We’ll keep them on for the balance of any amount of time we’re remotely near anybody,” Mr. Murphy said.

On Capitol Hill, many senators have not worn masks during their pro forma sessions. But the Senate majority leader, Mitch McConnell, a Republican, was photographed in a surgical mask outside of the Senate on Monday, removing it to deliver his remarks on the Senate floor. And House Speaker Nancy Pelosi on Tuesday simply pulled a blue patterned scarf over her face as she arrived at and departed her news conference.

At the White House, aides have dismissed the few National Security Council officials who wear masks in the West Wing as “alarmists.” And Mr. Trump appeared to scoff at a reporter who tried to ask a question at a recent news conference while wearing a mask, saying he could “barely” hear his question.

Administration officials also dismissed Mr. Polis’s decision to wear a mask while greeting Mr. Pence as a bit of political theater. (Mr. Polis’s office did not return a phone call on Tuesday.) The vice president, aides said, did not need to wear one because he is tested regularly for the coronavirus — a faulty argument, according to public health experts.

“When the face-covering guidelines were developed, it was with the intention to not only protect yourself, but primarily to protect others from asymptomatic spread,” said Katie Miller, Mr. Pence’s spokeswoman. “Vice President Pence is negative for Covid-19 and is therefore not asymptomatic.”

Mr. Pence could, of course, contract the virus between tests. More important, public health experts noted that the tests themselves were not infallible.

Even in Covid-19 patients who are showing symptoms, diagnostic tests may detect the virus only 75 percent of the time, said Dr. Mark Loeb, a microbiologist and infectious disease specialist at McMaster University, and it isn’t clear how sensitive the tests are in asymptomatic cases.

“We don’t actually have the estimates for the sensitivity, the ability to rule out false negatives, for asymptomatic testing,” Dr. Loeb said. “So it’s certainly something, but it doesn’t necessarily rule out infection.”

Other experts said that, while preventing asymptomatic transmission is the medical goal of the guidelines on masks, it is not the only reason for public officials to wear them. By wearing masks in public, officials model the behavior they are asking citizens to adopt and can help influence people to take the guidelines seriously.

There is disagreement within the medical community on how effective cloth masks — as opposed to surgical or N95 masks — are in preventing asymptomatic transmission, Dr. Adalja said, but “if you’re part of a team that’s actually advocating people to wear those masks, then I think it becomes odd if you’re not wearing a mask.”

Mr. Trump undercut the mask recommendation even as he announced it on April 3, emphasizing repeatedly that it was voluntary.

“Wearing a face mask as I greet presidents, prime ministers, dictators, kings, queens — I don’t know,” he added. “Somehow, I don’t see it for myself.”