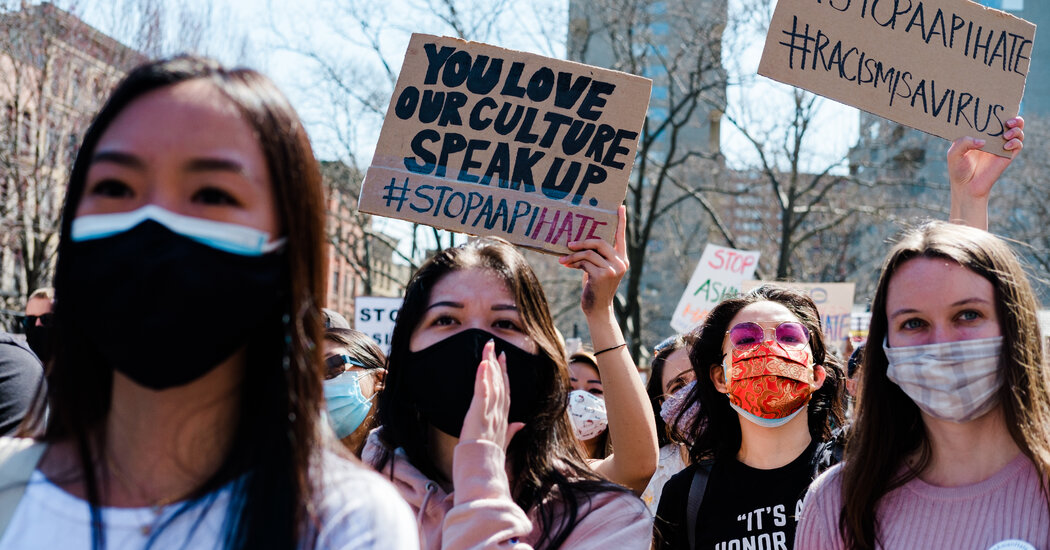 The authorities said they were investigating at least four of the attacks as possible hate crimes, including one that left a man in critical condition.

A 68-year-old Sri Lankan man was riding the subway in Lower Manhattan on Friday when another passenger yelled a racial slur and punched him in the head, leaving him bloodied and in critical condition.

On Saturday morning, a 66-year-old man of Asian descent was punched in the face on the Lower East Side.

Then on Sunday came three more attacks, the police said: A woman of Asian descent was thrown to the ground in Midtown, another was hit in the face with a metal pipe on the Lower East Side and a third was punched twice in the face after she attended a demonstration in Union Square in support of Asian-American victims with her young daughter.

The attacks around New York City over the weekend, coming as hundreds of marchers gathered in multiple protests to call for an end to such assaults, were yet more examples of violence directed at Asian-Americans amid a new wave of xenophobia that emerged during the pandemic.

The assaults underscored the feelings of fear and vulnerability that had taken hold in the Asian-American community, even before a shooting in the Atlanta area last week left eight people dead, including six women of Asian descent.

Katie Hou, 37, who is Chinese-American and was attacked on Sunday afternoon after she went to the demonstration in Union Square, said in an interview that she was recovering and hoped her encounter would not scare other Asian-American people from speaking out.

“People need to be vigilant about their safety, but at the same time, we need to do something to stop this from happening again,” she said.

The police said they were investigating at least five different attacks that took place between Friday and Sunday, and three people have been arrested in connection with three of them.

But much is still not known about the victims or the attackers, at least two of whom appeared to be behaving erratically before the incidents.

In the assault on the subway, the man who was arrested, Marc Mathieu, posted a long, rambling video on Facebook the morning of the attack, in which he spoke unintelligibly about violent security forces working at the Staten Island Ferry, among other disjointed topics.

The man who attacked the woman after the demonstration on Sunday pulled down his pants and exposed himself to witnesses and yelled at passers-by, telling them they were going to jail, according to one witness of the attack.

Both of those cases are being investigated as hate crimes, the police said. But the criminal justice system has faced challenges in definitively proving racist motives in apparent anti-Asian crimes. Some advocates have pointed to shortcomings in the laws that govern hate crimes.

Acknowledging the spate of violence, Mayor Bill de Blasio on Monday pledged that the city would increase the police presence in Asian communities and encouraged people to report crimes.

“It sickens me, and it angers me, and we will deal with it aggressively,” he said at a news conference. “I want everyone, in every way you can, to help support our Asian-American neighbors, speak up for them, help report anything you see.”

While it is difficult to measure the extent of the recent violence against people of Asian descent, in part because many crimes go unreported, the number of police investigations into hate crimes has gone up this year, compared with the same period last year.

Police Commissioner Dermot F. Shea, during an interview with Pix11 on Thursday before the recent attacks, said the department was investigating 10 anti-Asian hate crimes reported through mid-March, compared to none in early 2020 before the pandemic reached New York.

The department recorded 29 anti-Asian attacks last year, including 25 that investigators believed stemmed from anti-Asian sentiment and the perception that the victim was carrying the coronavirus, according to police statistics released in January.

The Police Department created a unit last year under its hate crimes task force that is specifically focused on hate crimes against people of Asian descent.

“It’s very important that we find people who do this and take them off the streets,” Mr. de Blasio said on Monday.

George O’krepkie, a witness to the assault, said the attacker threw what appeared to be a crumpled-up newspaper at the victim before charging at him and yelling a racial slur.

“He was on top of him,” he said. “Within seconds there was blood everywhere.”

The victim was taken to NewYork-Presbyterian Lower Manhattan Hospital in critical but stable condition. It was not clear if he had been released, but a man who answered the phone number listed for the victim declined to comment.

Mr. Mathieu was arraigned on Monday on one count of second-degree assault, and prosecutors, who ultimately determine whether to charge anyone with a hate crime, said they were investigating if the attack constituted such a crime.

Relatives of Mr. Mathieu did not immediately respond to requests for comment. A lawyer for Mr. Mathieu declined to comment.

The police have not released the name of the man who they believe attacked a man on the Lower East Side on Saturday. That attack is also being investigated as a hate crime.

On Sunday, Ms. Hou, who works in accounting, said she had taken her 7-year-old daughter to a rally at Union Square to learn about racial tensions in America, particularly after the shooting in Atlanta. She said the two had left the rally around 11:30 a.m. when a man walked up to Ms. Hou and asked for a sign she was carrying that read, “Hate Has No Peace” and “Racist = Psychopath.”

She said she gave him the sign because she thought he wanted to protest. But he smashed it on the ground, she said. As she tried to confront him, he punched her twice in the face, she said, but the two did not exchange any words.

DeVonn Francis, 27, who witnessed the attack, said the man began yelling at people, saying they were going to jail. Mr. Francis and others followed the man to a nearby subway station, where he exposed himself before getting on the train and riding away.

Hours later on Sunday, a 41-year-old woman of Asian descent was walking in Midtown on West 31st Street when she was grabbed from behind and thrown on the ground, police said.

Patricia Melendez, 37, was arrested on charges of assault and disorderly conduct. It was not clear if Ms. Melendez had a lawyer, and her relatives could not be reached for comment.

It was not immediately clear how seriously the victim was injured, but the police said they were investigating that attack as another possible hate crime.

Still later on Sunday afternoon, a 54-year-old woman of Asian descent was walking on the Lower East Side when a man confronted her and struck her in the face with a metal pipe. Police did not name the victim, but said she suffered a laceration to her nose and was taken to a nearby hospital.

Relatives for Mr. Guerrero did not immediately respond to requests for comment on Monday. It was not clear whether he had a lawyer.