As the Election Looms, Investors See Uncertainty. They Don’t Like It. 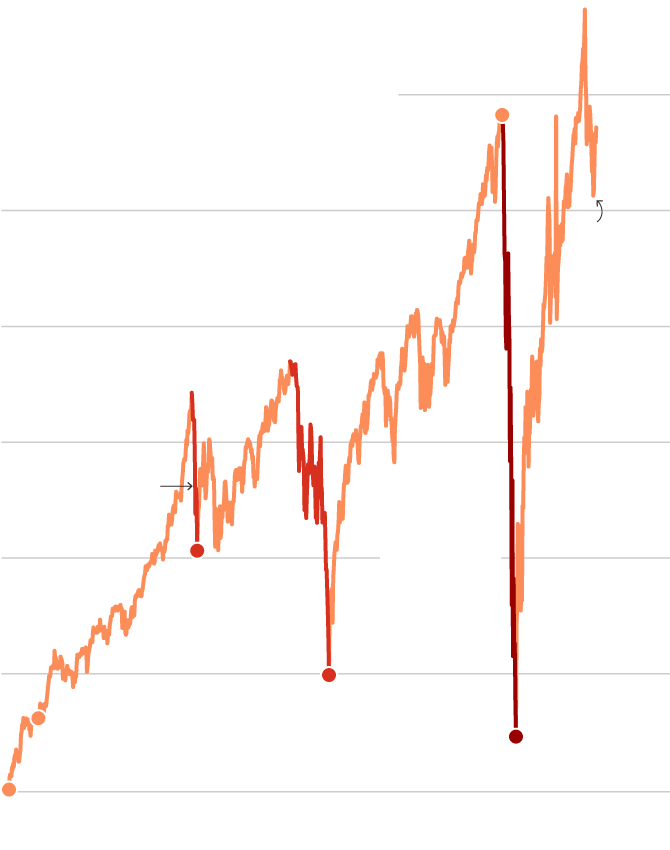 since the day before 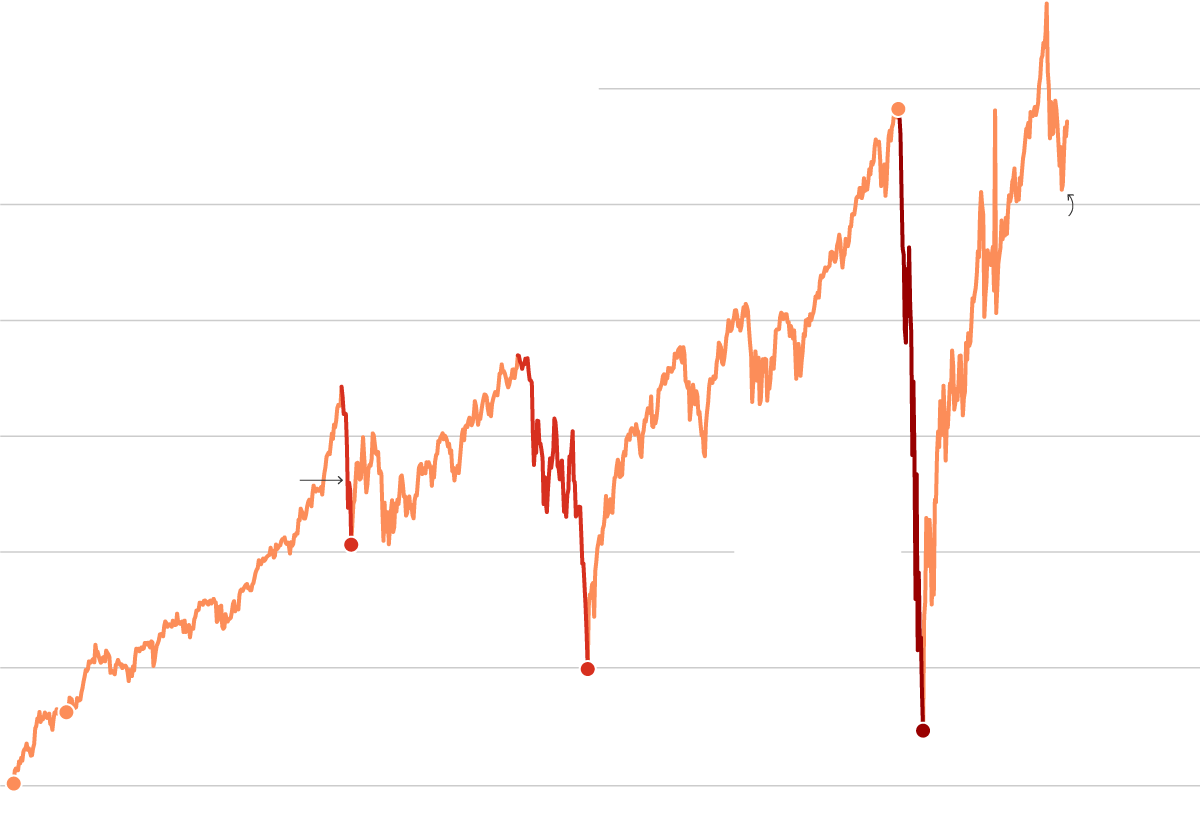 the day before the 2016 election

The stock market has been on a tear for much of 2020, but there is now more volatility as investors worry about the outcome of the presidential vote.

Investors have spent recent months pushing the stock market to record highs, seemingly undeterred by the worst pandemic in a century and the enormous toll it has taken on the United States economy.

But now, politics is giving them agita.

In the last few weeks, the market’s results have reflected the uncertainty weighing on investors’ minds as they prepare for what could be a politically turbulent stretch — including a Senate fight to fill the former Supreme Court seat of Justice Ruth Bader Ginsburg and the November presidential election, which could result in a constitutional crisis if President Trump refuses to accept the judgment of voters.

And the first presidential debate didn’t necessarily ease investor’s minds. Paul Donovan, the chief economist of UBS Global Wealth Management, wrote in a note to clients that, if anything, Tuesday’s debate “may have increased expectations for a contested election result,” after Mr. Trump again suggested that he would challenge an unfavorable outcome.

Stocks have lost steam since notching new highs in early September, with the S&P 500 stock index down about 4 percent for the month, its first monthly decline since March. And at points last week, the index hovered around correction territory — a Wall Street term used to signify a market drop of 10 percent or more from a recent high.

Some Wall Street observers attribute the recent market slump to the fact that stock prices — in particular shares of some big technology companies — had become too expensive after rising roughly 60 percent since late March, when the Federal Reserve moved to prop up the economy. But analysts say the market also dipped because professional money managers sold shares to reduce their risk and raise cash, moves that are typical responses to market uncertainty.

Heading into the year’s final quarter, investors are also coming to terms with the likelihood that no more stimulus money will be coming, as the approaching presidential election paralyzes Washington’s ability to provide fresh support to the struggling economy. The “lack of the last piece of fiscal stimulus that people were counting on or hoping for” has left investors nervous, Mr. Gallagher said.

“I don’t think the market will be ready to go up again until the results of the election are determined and a vaccine is here,” said Byron Wien, a longtime market observer and the vice chairman of the private wealth group at Blackstone, the private equity firm. “Then you could see another strong rally.”

Investors crave clarity regarding political outcomes. They like knowing that a Republican administration will deliver tax cuts and deregulatory policies, or whether a divided government will create gridlock. But this time around, the tensions are so high and the possible outcomes so muddy that many investors don’t know what to base their buying and selling decisions on. In such an environment, investors say, the most market-friendly outcome would simply be an overwhelmingly clear electoral result.

“The single biggest comment that I hear is, ‘I want an election, I want a result of an election that is so clear that it can’t really be contested,’” said Doug Rivelli, president of the institutional brokerage firm Abel Noser in New York.

In a research note published on Friday, JPMorgan Chase market analysts pointed to a similar dynamic: How the market responds to the election depends less on which candidate wins and more on how conclusive the result is.

“A close election resulting in acrimony, legal challenges and legislative paralysis would be the worst outcome for markets given the ongoing global pandemic,” they wrote.

That would seem to be what investors are expecting, going by the prices for options on the VIX, as the Chicago Board Options Exchange Volatility index — widely considered the stock market’s “fear gauge” — is known. In recent weeks, those prices have moved in a way that suggests investors expect a chaotic aftermath of the vote.

“We’re seeing the markets price in potentially greater risk for the period after the election than they are for Election Day,” said Steve Sosnick, chief strategist at Interactive Brokers in Greenwich, Conn. “I can’t remember a time where U.S. citizens had to worry about whether there would be a peaceful transfer of power, and whether all parties would have any doubt in accepting the electoral results.”

Many investors are girding for a delayed or disputed electoral result. Because of the coronavirus pandemic, traditional voting will be disrupted as more people mail in their votes rather than cast them in person. That could mean the winner of the election won’t be declared on election night.

Mr. Trump’s pronouncements on the election results are also weighing on investors’ minds. The president has for months made statements casting doubt on the validity of mail-in ballots, recently indicating that he does not feel bound by the political traditions that have made the peaceful transfer of power a feature of the American political system. He has repeatedly declined to commit to a peaceful transfer of power if the Democratic presidential candidate, Joseph R. Biden Jr. — the two met on Tuesday evening for the first presidential debate — wins. Mr. Trump has also renewed his inaccurate claims about extensive voting fraud.

“Let’s face it, very few in the market are anticipating a smooth election nor for any potential transition of power to be uneventful,” Ian Lyngen, a bond market analyst for BMO Capital Markets, wrote in a note to investors on Wednesday. “The extent to which November serves to disrupt functioning of the federal government or fuel further civil unrest remains to be seen and, frankly, is the most significant tail risk as we ponder potential outcomes.”

A prolonged period with the election result in dispute would almost certainly keep investors wary about putting money into the market as they await clarity.

Erik Knutzen, multi-asset class chief investment officer at Neuberger Berman, who oversees investment portfolios of stocks, bonds, commodities and other assets, is keeping an eye on the market’s expectation that volatility will surge after the vote.

“That’s what the market’s saying,” Mr. Knutzen said. “So in our portfolios we’re moderate in our risk.”

Mr. Knutzen, who has been involved in financial markets for decades, recalled the period after the presidential election of 2000, when a dispute involving Florida votes was ultimately resolved through a Supreme Court ruling. Stocks fell more than 8 percent in the weeks after the vote, as the race remained unresolved.

“I certainly remember how volatile it was,” he said. “That is a fair kind of example of what is likely to happen” if the 2020 election turns into a court battle.

Beyond the market volatility, an uncertain electoral outcome also has implications for an economy still hamstrung by coronavirus. The U.S. economy has recovered from the worst of the downturn, and some pockets of strength — such as housing — have emerged. But unemployment, at 8.4 percent in August, is still high. Labor market data still shows hundreds of thousands of people applying for jobless benefits every week.

Until recently, there was widespread consensus on Wall Street that Congress and the White House would produce another economic stimulus package before the election, which would help keep American households and businesses afloat until the hoped-for arrival of a vaccine next year. However, the death on Sept. 18 of Justice Ginsburg — which began the contentious fight over confirming her replacement in an election year — seemed to effectively signal the end of those efforts, which had already stalled.

Analysts say any federal government response to an upsurge in coronavirus cases this season would be hard to pull off if there was a prolonged battle over the outcome of the election. That leaves investors facing the possibility of months without an operating government, an unattractive backdrop for those who put money to work. Therefore, as the election draws closer, investors are likely to continue reducing their exposure to the stock market and putting more money into what they consider safer assets, such as Treasury notes or gold.

“I think that their feeling is that between now and the election that they’re going to start to get a lot more conservative, a lot more defensive, and start to take risk off the table,” Abel Noser’s Mr. Rivelli said of the investors he spoke with. “They feel the risk of a market dislocation after the election is higher than they’re willing to stomach.”