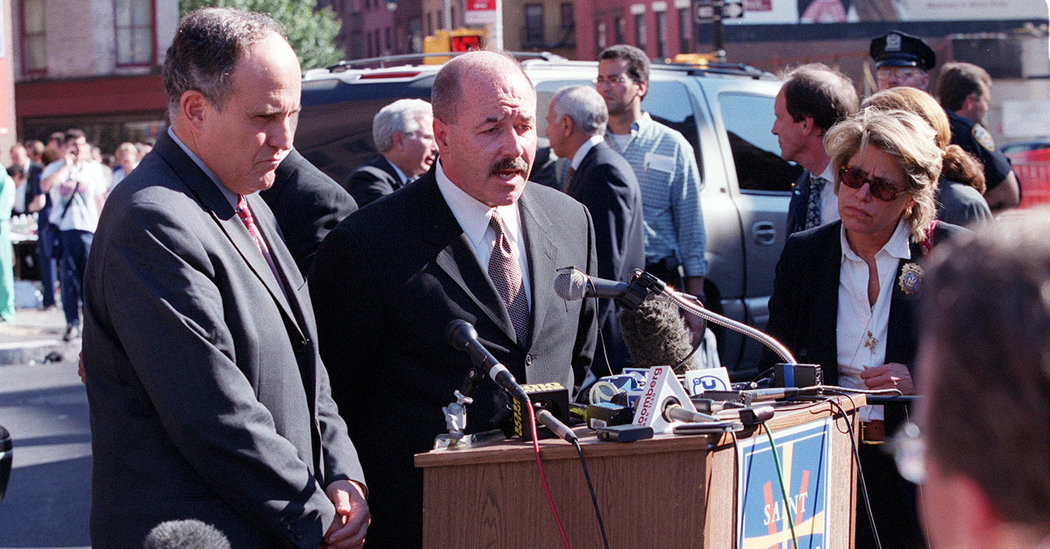 On Monday morning, I watched the news conferences held by Rudolph Giuliani on Sept. 11, 2001, when he was still the mayor of New York. Eighteen-plus years later, they look like dispatches from a remote and impossible universe, a place where dolphins roamed the earth and the sun shone pink.

But at the time, they couldn’t have been more real or reassuring. As impossible as it is to imagine, Rudolph Giuliani — the yowling Gollum of basic cable, President Trump’s Cain-raisingest enabler — was once one of the most steadying, reassuring men in the United States. If I hadn’t lived through it, I would have said I’d dreamed it. But you can watch the footage yourself: There he is, speaking directly and from the heart, calm as snow.

What drove me to review these news conferences was a simple question: What was Giuliani providing at a time of crisis that Donald Trump, facing a potential emergency of a similar magnitude, is not?

Part of it was sheer competence. Giuliani exuded a level of self-possession and authority that was impossible to fake. He rattled off the names of people he’d spoken to and what they were doing. He spoke in numbers: how many rescue workers were downtown, how many civilians had been evacuated to Liberty State Park, across the Hudson River. Over the following days he appeared frequently, providing updates, knowing that ubiquity is the key to stemming panic, and he spoke practically, about concrete things. Were the subways running? Partly. The kids? Staying in school.

He didn’t lie. When asked on the afternoon of Sept. 11 how many casualties there were, he said he didn’t know — “more than any of us can bear, ultimately.” It was one of the most heartbreaking spontaneous utterances I’ve heard from a person in public life.

What he didn’t do was frame anything politically, ever, and the conversation could easily have soured in that direction. This was a press corps that on Sept. 10 did not harbor any great love for Rudolph Giuliani. They could easily have grilled him: Why had his administration put its Emergency Command Center, conceived precisely for a moment like this, in 7 World Trade Center, a known target of terrorists?

He never gave them the chance. Giuliani seemed to know instinctively that what the public craved during a crisis was humanity, humility and community. And that, even more than a sense of control, is what he established in those news conferences — a sense that he cared, that our institutions cared, that we wouldn’t be asked to fend for ourselves.

His replies, always, appealed to our better angels. “Nobody should engage in group blame,” he said, when told that Muslims in New York were fearful they’d be targeted by angry citizens. “Then they’re just participating in the kind of activity we just witnessed. New Yorkers are not like that.”

That is the kind of response our current crisis requires. We’re not yet getting it. It is particularly painful to compare Giuliani’s performance with Trump’s at his news conference about the coronavirus on Saturday. Is the virus yet the American emergency that Sept. 11 was? No. But it has already claimed lives and will claim more — on what order of magnitude we do not know — and it means tolerating a dreadful uncertainty, because (as with terrorism) we cannot know what’s going on in hidden cells.

Unfortunately, Trump doesn’t do facts, doesn’t know humanity and has only a passing acquaintance with community. Forget that he was, until he got savaged for it, doing crisis management by ad-hocracy. The real problem with the news conference on Saturday was that it was political, not informational, with Trump congratulating himself and running down Democrats. He seemed disconnected from the stakes, the anxiety, the very meaning of leadership. He couldn’t so much as correctly identify the gender of the first victim in the United States (a man, not a woman).

Perhaps the creepiest aspect of the news conference was subtle. Trump said, in a variety of ways, that “healthy individuals should be able to fully recover.” Setting aside whether it’s true — and alas, it probably isn’t, not entirely — I kept waiting for the second half of that sentiment, namely: But for those of you who are older, frailer or already contending with a serious illness, know that we are concerned about you, and we’re doing everything we can. It never came. Trump seldom turns his thoughts to the weak.

By Monday afternoon, Vice President Mike Pence had taken over, this time flanked by his task force of experts. It was a dramatic improvement. But when Ashley Parker of The Washington Post asked Pence whether he’d take his children to Disney World over spring break, he didn’t answer. (Monday night, The Daily Beast reported that the Defense Intelligence Agency has banned all international and domestic temporary duty assignment travel. Today, could someone explain that?)

The public remains fretful and uncertain. We still haven’t gotten a calm tutorial on prevention, preparedness and the habits of this virus. We’ve read that we should stock up on food. But should we? Supermarkets are out of hand sanitizer. But does it matter, if we still have soap? How should we think about being in airplanes, bars, restaurants? The public shouldn’t rely on Google at this moment. But that’s precisely what we’re doing. The most we’ve gotten is an all-caps tweet from the surgeon general telling us to STOP BUYING MASKS!

But this is the all-caps presidency. Trump’s fans may pride him on his directness, but it’s always of the all-caps sort, predicated on showmanship rather than sincerity, fearmongering rather than comfort, fracture rather than unity. Rage is the new authenticity. It is the very worst thing in the world for an epidemic, when trust and calm are paramount.

On Monday, Pence promised an Rx: daily briefings. Yet it’s Tuesday and there’s nothing on the schedule so far. Let’s hope that when he and his team finally get around to it, their answers are humane and forthright. The realities of this virus shouldn’t be sanitized.