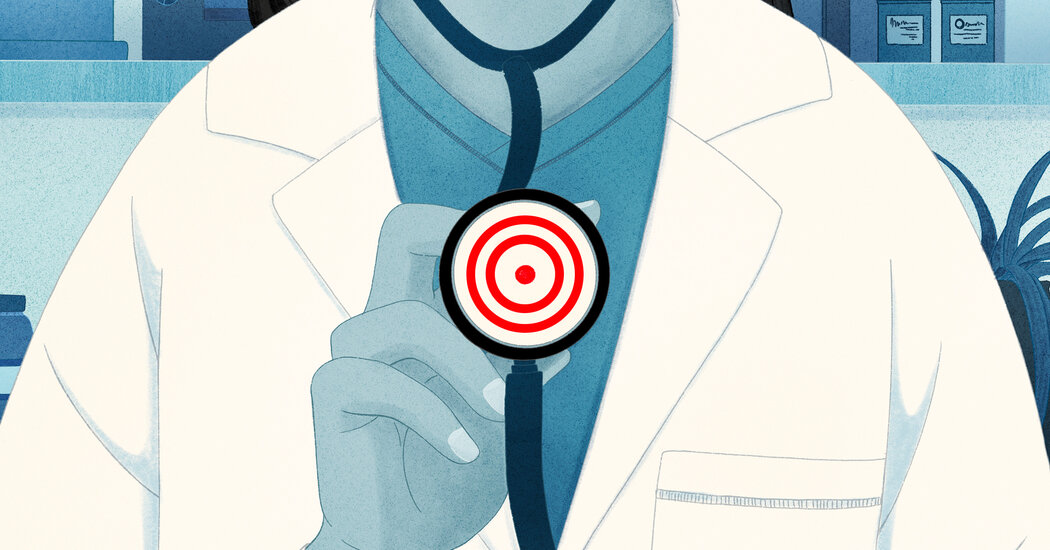 It was near the beginning of the pandemic, in mid-April of 2020, when a stranger spit on me. After apparently taking note of my hospital badge and mask, he announced that even though I was a doctor, I “brought the sickness.” He called me “Hindu,” along with a string of profanities.

I got away quickly, washed the saliva out of my hair in a hospital bathroom and started my day. I had other things on my mind: Those of us in medicine were working extra shifts, even as the virus changed our lives.

I felt intense pride about being a doctor — I’m a psychiatrist who was working in a hospital in the Boston area — when the country needed me most, and it made me feel deeply American. I felt needed and seen, moved by grateful strangers banging pots, by their admiration for all of us on the front line, doing our jobs without complaint. I monitored my temperature and oxygen twice a day and quarantined away from my young children. I drove out to far-flung medical supply stores, finding stashes of personal protective equipment and sharing them with house staff members and other health workers. I offered extra masks to grocery store clerks and donated cleaning supplies to hospitals with shortages. I had never served in war before, but now I was enlisted.

I focused on all this, instead of the stranger’s cruel words.

The truth is, I had experienced the same kind of hate and bigotry he expressed before, in public places and in health care settings, but until this year I didn’t fully grapple with or fully acknowledge the impact of such aggression. My medical training encouraged me to focus on the work and deny and minimize the discrimination I faced.

But the recent rise in attention to anti-Asian hate has forced me to reckon with how we Asian-American women doctors are demeaned as a group, and how even the valor we display when we show up to work to risk our lives during a pandemic doesn’t protect us from having to endure racism and sexism.

My awareness of this grew gradually as the pandemic went on, and all around us, anti-Asian bigotry seemed to be intensifying. Donald Trump’s use of cruel phrases — “Chinese Virus” and, later, “Kung Flu” — no doubt inspired some of the abuse. The murders of Asian-American women in the Atlanta area and the spate of brutal beatings of Asian-Americans, including elders and women, have made such hate impossible to ignore.

When I heard the suspected Atlanta area gunman’s reported explanation for why he killed six Asian-American women and two others, I knew I was hearing stereotypes that are often used to characterize us, regardless of our professions. “Temptation,” he called his victims, according to authorities. He linked their Asian-American faces and bodies to his torment.

I’ve been similarly stereotyped by colleagues and patients. Docile and passive. Deferential. Tentative. Servile. The persistent, pernicious American prejudice about women like me undermines us on a daily basis. Our white coats and hospital badges don’t discourage aggression — they make us a target for it. Our very existence in these relatively powerful roles challenges white male dominance.

It’s no surprise that one of the first Asian-American doctors to practice medicine in the United States, Dr. Margaret Chung, was allowed to train but forced to work only as a nurse for the first few months after she graduated from medical school in 1916.

When immigration quotas were loosened to address the doctor shortage of the late 1960s, a generation of Asian immigrant doctors who had trained in other countries paved the way for their daughters and now granddaughters to practice medicine. But the stereotypes followed us, and so did the abuse. I hear about it from friends, colleagues and medical school classmates, a sort of “whisper network” of Asian-American women doctors from around the country that shares experiences that range from microaggressions to assaults: being referred to by first names and demeaning nicknames by white physicians and nurses, having to calmly reject male patients’ inappropriate demands for massages. I’m still haunted by the story a Korean-American doctor once told me about a white male doctor exposing himself to her in a university library while she was studying for exams.

Navigating such challenges can be an intensely lonely and isolating experience. There aren’t nearly as many of us as one might believe, based on the many television shows and films that place Asian women in the role of doctor. In 2018, about 9 percent of the almost 800,000 doctors surveyed by the Association of American Medical Colleges who reported their race and gender identified as Asian-American women. (Black and Hispanic women doctors were even more scarce, at about 3 percent each.) That’s compared with the 43 percent of survey respondents who identified as white men. Last year, only 64 medical department chairs in the country, out of more than three thousand surveyed, were occupied by Asian-American women doctors (compared with 2,037 by white men, and only 49 by Black women, who have themselves endured discriminatory treatment).

Since I was in medical school, some patients have told me and other Asian-American women doctors You don’t belong here. In March, Lucy Li, a Chinese-American woman anesthesia resident, was verbally assaulted after she left her shift at the hospital. Oranicha Jumreornvong, a medical student who immigrated from Thailand in 2014, was beaten in February on her way to the school of medicine in New York City where she was studying. I’ve now come to believe that these incidents were all fueled by the same racist and misogynist attitudes — and that the contributions and willing sacrifices I make as a doctor will never be enough to protect me or other Asian-American women.

I still feel proud of my work at the hospital during the pandemic. But I can no longer look away from the specific, fetishizing, gendered hate that Asian-American women face, both in and out of the hospital setting. Something has to change. Our valor should be reserved for coping with the challenges of a pandemic; it shouldn’t be required to endure the distorted perceptions and ugly words that Asian-American women encounter every day.

Chaya Bhuvaneswar is a physician and the author of “White Dancing Elephants,” a collection of short stories about the experiences of women of color who face sexual harassment and racial violence.