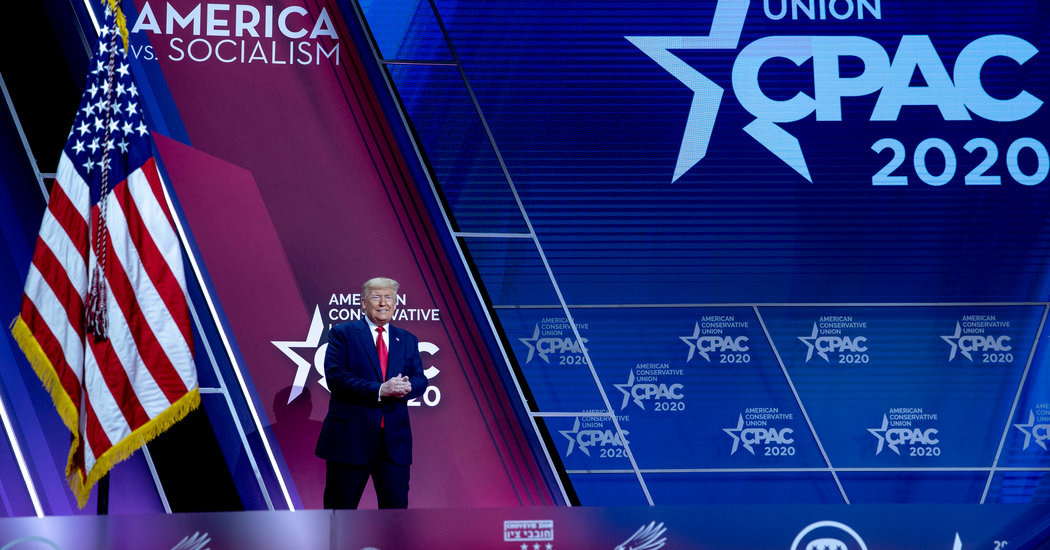 WASHINGTON — President Trump crouched underneath his microphone on Saturday, mimicking the height of Michael R. Bloomberg, the billionaire former mayor of New York City who is running for president.

Mr. Trump pointed at the ceiling above him, marveling at all of his own success. “Maybe it’s right there, right?” he said. “Thank you. Thank you, God.”

Throughout an animated 90-minute speech in front of conservative activists at the annual Conservative Political Action Conference outside Washington, a confident Mr. Trump attacked his rivals in nasty terms while gloating about and inflating his own achievements.

He even exited the stage by embracing the American flag in both of his arms, mouthing the words “I love you” and planting a kiss on the stars and stripes.

Mr. Trump talked up what he said were his administration’s successes: the appointment of conservative judges, the killing of terrorists, tax cuts and the passage of trade deals. But he appeared most animated when riffing about the Democratic presidential field, on the same day that voters in South Carolina headed to the polls to vote in the first primary where a majority-black electorate is set to weigh in.

Mr. Bloomberg, whose mammoth spending has privately concerned Mr. Trump, “writes checks like a drunken sailor,” the president said, ribbing the former mayor for spending more than half a billion dollars on a presidential bid that Mr. Trump predicted would not make it past Super Tuesday on March 3.

“That was probably the worst debate performance in the history of presidential debates,” he said of Mr. Bloomberg’s debut this month on the debate stage, which was widely viewed as a bubble-bursting showing for a potential dark horse candidate. “It just shows you, you can’t buy an election. You got to bring the goods a little bit, too.”

“Everyone knows he’s not a communist,” he said of Mr. Biden. “With Bernie, there’s a real question about that.” But Mr. Trump said his concern about Mr. Biden was his mental acuity.

“The difference is Joe’s not going to be running the government,” he said. “He’s just going to be sitting in a home some place.”

Mr. Trump, who arrived late at CPAC after holding a last-minute news conference at the White House to announce expanded travel restrictions related to the spread of the coronavirus, mentioned the outbreak only in passing.

Congratulating himself on his administration’s response, Mr. Trump said the decision to impose early travel restrictions “has been now given very good grades, like an A +++.” And he promised a nonpartisan response to the coronavirus, even as he attacked Democrats.

“The extreme fringes called us racists,” he said. “They wanted to let infected people pour into our country.”

On Friday, Mr. Trump’s acting chief of staff, Mick Mulvaney, addressed the same audience at CPAC, and accused journalists of hyping the coronavirus because “they think this will bring down the president — that’s what this is all about.”

On Saturday afternoon, however, Mr. Trump appeared less interested in discussing the outbreak that has been the first public health crisis of his presidency. Instead, he was eager to bask in the warm reception of the conservative audience, who spent the past four days listening to a procession of speakers road-testing messages for Mr. Trump’s 2020 re-election campaign.

He lauded his decision to fire James B. Comey as the F.B.I. director. “That was a great firing,” he said.

He claimed that even Senator Mitt Romney of Utah, the lone Republican to vote to impeach Mr. Trump on one article, abuse of power, had split the baby. “Even him, I got half a vote,” he said. “He couldn’t do it all. He wanted to get nice free publicity for himself.”

Mr. Trump also falsely characterized the 2017 tax cut as the “largest” in history (several others outrank it), and claimed that he had eliminated the estate tax. In reality, the 2017 law increased the threshold but the tax still exists.

Mr. Trump has been a regular speaker at CPAC for years, and has credited the organization for giving him a platform long before he officially declared his run for president. In 2015, however, when he was still a New York businessman, the crowd booed him when he proposed fighting ISIS with troops on the ground in the Middle East.

But for the past four years, he has been the main attraction and headliner of the conference, which has been molded in his image. Last year, Mr. Trump delivered the longest speech of his presidency from the CPAC stage, clocking in at two hours five minutes. (That year, he opened, rather than closed, with a flag hug.)

In an election year, his address was more in line with the staple speeches he has been giving at campaign rallies, and it set no records for length.

But he appeared particularly awed by his own abilities to keep the spotlight on himself.

“I can get elected twice over the wall, can you believe this,” he told the crowd, while claiming, falsely, that Mexico was paying for the construction of a wall along the southern border.

“Yes they are, they are paying for it,” he said, adding, without explaining himself, “oh, they’re going to die when I put in what I’m going to do.”

Mr. Trump also claimed he was not bothered that Greta Thunberg, the teenage climate activist whom Time named its person of the year, occupied a magazine cover he has long coveted, even though he chose to bring up an issue that was published over two months ago. “The whole world revolves around this person,” he said, referring to himself. “Every story is Trump or Trump-related.”