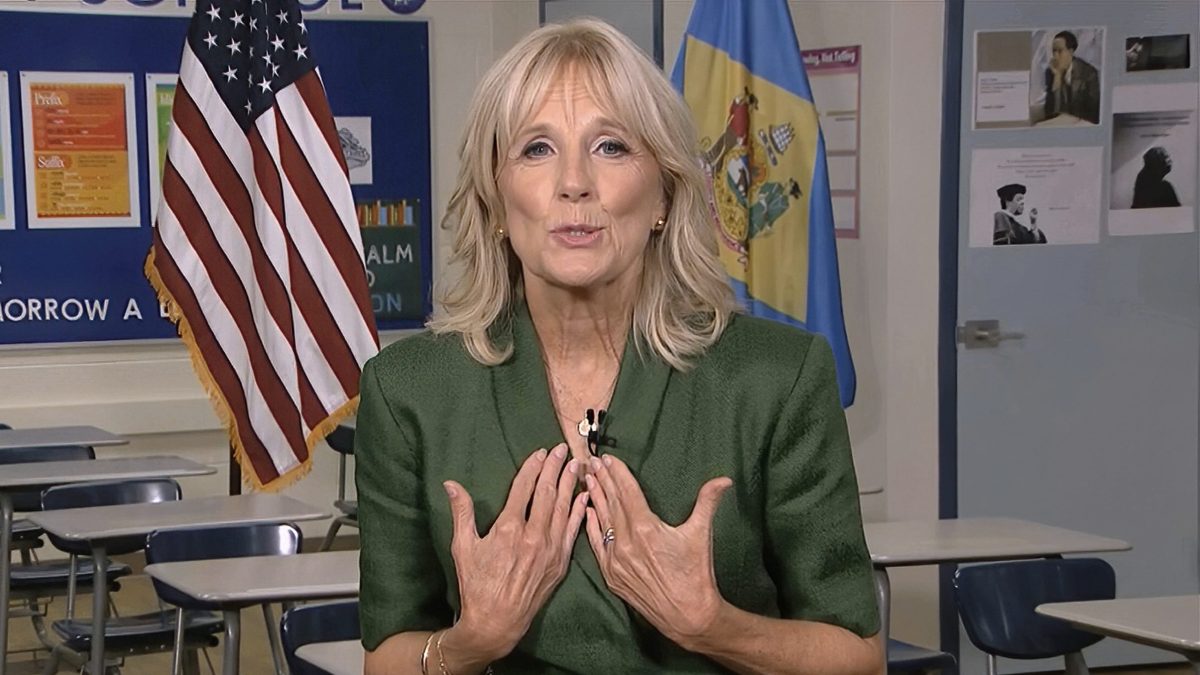 But it was his wife’s support that painted the most hopeful and emotional picture of a Biden presidency. Jill Biden, speaking directly to wives, mothers and teachers just like her, described the devastation she felt watching the coronavirus pandemic ravage the nation. And she told the audience her husband could lead the nation through this hardship just as he has their family through many personal tragedies of their own.

“As a mother and a grandmother, as an American, I am heartbroken by the magnitude of this loss. By the failure to protect our communities. By every precious and irreplaceable life gone,” she said. “Like so many of you, I’m left asking: How do I keep my family safe?”

Speaking from the Wilmington, Delaware, high school classroom where she taught English years ago, Mrs. Biden described “the anxiety that echoes down empty hallways” and the uncertainty that has come as schools grapple with whether to resume in-person teaching as the pandemic rages on.

During the Democratic National Convention on Tuesday, delegates from around the U.S. pledged their support for Joe Biden to officially become the Democratic presidential nominee. Here are the top moments you may have missed. Footage provided is a mixed feed and is a joint effort by the pool and the DNCC.

“The burdens we carry are heavy, and we need someone with strong shoulders,” Mrs. Biden said. “If we entrust this nation to Joe, he will do for your family what he did for ours: Bring us together and make us whole, carry us forward in our time of need, keep the promise of America for all of us.”

And she pledged that if her husband is elected president, America’s classrooms “will ring out with laughter and possibility once again.”

During their decades in public life, Jill and Joe Biden have faced considerable personal loss. Shortly after getting elected as a senator, in 1972, Biden’s first wife and young daughter were killed in a car crash, leaving him to raise his two sons alone. He married Jill about four years later, but the two faced tragedy together when Biden’s son Beau died of brain cancer in 2015.

Both speak openly on the campaign trail about the challenges they’ve experienced, and on Tuesday night, Mrs. Biden recounted seeing her husband, just four days after Beau’s funeral, “shave and put on his suit” and “walk out into a world empty of our son.”

Mrs. Biden said that while at times she didn’t understand how he did it, she understood why: “For you.” She added that her husband’s “strength of will is unstoppable” and “his faith is unshakable” because “his faith is in you — in us.”

And she offered an optimistic view of the nation’s future, telling viewers that “Americans of all walks of life are putting their shoulders back, fighting for each other. We haven’t given up.”

“We just need leadership worthy of our nation,” she continued. “Honest leadership to bring us back together — to recover from this pandemic and prepare for whatever else is next.”

Biden’s remarks capped off the second night of the convention — and was her biggest speech yet. It marked a considerable evolution for a woman who is a self-described introvert and initially a reluctant political wife. In her memoir, she writes of giving her first political speech and having no desire to “give any speeches, anytime, anywhere — just the thought of doing so made me so nervous I felt sick.”

But after eight years as the vice president’s wife, and then giving speeches and appearing at events after her husband left office, Jill Biden has become one of her husband’s most prominent surrogates. She has appeared in virtual events in more than 17 cities since May and is one of the campaign’s primary surrogates to Latino voters, headlining town halls and holding frequent calls with members of the Congressional Hispanic Caucus.

Jill Biden married the presumptive Democratic presidential nominee in 1977, and helped raise his surviving sons, Beau and Hunter, before giving birth to daughter Ashley in 1981.

Watch former Secretary of State John Kerry deliver his full address during the second night of the 2020 Democratic National Convention. Footage provided is a mixed feed and is a joint effort by the pool and the DNCC.

As Joe Biden commuted from Delaware to Washington while serving as a senator, his wife built a career as a teacher, ultimately earning two master’s degrees and then a doctorate in education from the University of Delaware in 2007.

Jill Biden continued to teach at a community college while her husband was vice president, against the advice of aides at the time.

“Being a teacher is not what I do but who I am,” she wrote in her memoir, describing “scrambling into a cocktail dress and heels” in the bathroom at her school to make it to a White House reception, or grading papers on Air Force Two, with relish.

Indeed, she has said she plans to continue teaching if she becomes first lady.

Watch former President Bill Clinton deliver his full address during the second night of the 2020 Democratic National Convention. Footage provided is a mixed feed and is a joint effort by the pool and the DNCC.

Aides say she’ll also continue to advocate for many of the same issues she championed as the vice president’s wife if she returns to the White House as first lady. During her eight years in the Obama administration, she focused on military spouses and families, advocated for community colleges and sought to raise awareness around breast cancer prevention.