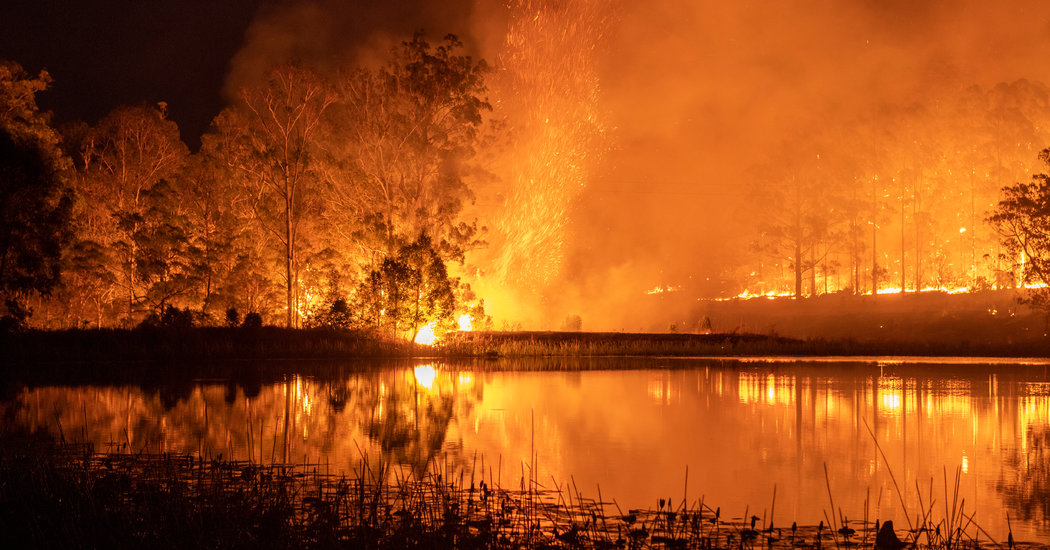 BRUNY ISLAND, Australia — Australia today is ground zero for the climate catastrophe. Its glorious Great Barrier Reef is dying, its world-heritage rain forests are burning, its giant kelp forests have largely vanished, numerous towns have run out of water or are about to, and now the vast continent is burning on a scale never before seen.

The images of the fires are a cross between “Mad Max” and “On the Beach”: thousands driven onto beaches in a dull orange haze, crowded tableaux of people and animals almost medieval in their strange muteness — half-Bruegel, half-Bosch, ringed by fire, survivors’ faces hidden behind masks and swimming goggles. Day turns to night as smoke extinguishes all light in the horrifying minutes before the red glow announces the imminence of the inferno. Flames leaping 200 feet into the air. Fire tornadoes. Terrified children at the helm of dinghies, piloting away from the flames, refugees in their own country.

The fires have already burned about 14.5 million acres — an area almost as large as West Virginia, more than triple the area destroyed by the 2018 fires in California and six times the size of the 2019 fires in Amazonia. Canberra’s air on New Year’s Day was the most polluted in the world partly because of a plume of fire smoke as wide as Europe.

Scientists estimate that close to half a billion native animals have been killed and fear that some species of animals and plants may have been wiped out completely. Surviving animals are abandoning their young in what is described as mass “starvation events.” At least 18 people are dead and grave fears are held about many more.

All this, and peak fire season is only just beginning.

As I write, a state of emergency has been declared in New South Wales and a state of disaster in Victoria, mass evacuations are taking place, a humanitarian catastrophe is feared, and towns up and down the east coast are surrounded by fires, all transport and most communication links cut, their fate unknown.

An email that the retired engineer Ian Mitchell sent to friends on New Year’s Day from the small northern Victoria community of Gipsy Point speaks for countless Australians at this moment of catastrophe:

we and most of Gipsy Point houses still here as of now. We have 16 people in Gipsy pt.

No power, no phone no chance of anyone arriving for 4 days as all roads blocked. Only satellite email is working We have 2 bigger boats and might be able to get supplies ‘esp fuel at Coota.

We need more able people to defend the town as we are in for bad heat from Friday again. Tucks area will be a problem from today, but trees down on all tracks, and no one to fight it.

We are tired, but ok.

The bookstore in the fire-ravaged village of Cobargo, New South Wales, has a new sign outside: “Post-Apocalyptic Fiction has been moved to Current Affairs.”

And yet, incredibly, the response of Australia’s leaders to this unprecedented national crisis has been not to defend their country but to defend the coal industry, a big donor to both major parties — as if they were willing the country to its doom. While the fires were exploding in mid-December, the leader of the opposition Labor Party went on a tour of coal mining communities expressing his unequivocal support for coal exports. The prime minister, the conservative Scott Morrison, went on vacation to Hawaii.

Since 1996 successive conservative Australian governments have successfully fought to subvert international agreements on climate change in defense of the country’s fossil fuel industries. Today, Australia is the world’s largest exporter of both coal and gas. It recently was ranked 57th out of 57 countries on climate-change action.

In no small part Mr. Morrison owes his narrow election victory last year to the coal-mining oligarch Clive Palmer, who formed a puppet party to keep the Labor Party — which had been committed to limited but real climate-change action — out of government. Mr. Palmer’s advertising budget for the campaign was more than double that of the two major parties combined. Mr. Palmer subsequently announced plans to build the biggest coal mine in Australia.

Since Mr. Morrison, an ex-marketing man, was forced to return from his vacation and publicly apologize, he has chosen to spend his time creating feel-good images of himself, posing with cricketers or his family. He is seen far less often at the fires’ front lines, visiting ravaged communities or with survivors. Mr. Morrison has tried to present the fires as catastrophe-as-usual, nothing out of the ordinary.

This posture seems to be a chilling political calculation: With no effective opposition from a Labor Party reeling from its election loss and with media dominated by Rupert Murdoch — 58 percent of daily newspaper circulation — firmly behind his climate denialism, Mr. Morrison appears to hope that he will prevail as long as he doesn’t acknowledge the magnitude of the disaster engulfing Australia.

Mr. Morrison made his name as immigration minister, perfecting the cruelty of a policy that interns refugees in hellish Pacific-island camps, and seems indifferent to human suffering. Now his government has taken a disturbing authoritarian turn, cracking down on unions, civic organizations and journalists. Under legislation pending in Tasmania, and expected to be copied across Australia, environmental protesters now face up to 21 years in jail for demonstrating.

“Australia is a burning nation led by cowards,” wrote the leading broadcaster Hugh Riminton, speaking for many. To which he might have added “idiots,” after Deputy Prime Minister Michael McCormack blamed the fires on exploding horse manure.

Such are those who would open the gates of hell and lead a nation to commit climate suicide.

More than one-third of Australians are estimated to be affected by the fires. By a significant and increasing majority, Australians want action on climate change, and they are now asking questions about the growing gap between the Morrison government’s ideological fantasies and the reality of a dried-out, rapidly heating, burning Australia.

The situation is eerily reminiscent of the Soviet Union in the 1980s, when the ruling apparatchiks were all-powerful but losing the fundamental, moral legitimacy to govern. In Australia today, a political establishment, grown sclerotic and demented on its own fantasies, is facing a monstrous reality which it has neither the ability nor the will to confront.

Mr. Morrison may have a massive propaganda machine in the Murdoch press and no opposition, but his moral authority is bleeding away by the hour. On Thursday, after walking away from a pregnant woman asking for help, he was forced to flee the angry, heckling residents of a burned-out town. A local conservative politician described his own leader’s humiliation as “the welcome he probably deserved.”

As Mikhail Gorbachev, the last Soviet leader, once observed, the collapse of the Soviet Union began with the nuclear disaster at Chernobyl in 1986. In the wake of that catastrophe, “the system as we knew it became untenable,” he wrote in 2006. Could it be that the immense, still-unfolding tragedy of the Australian fires may yet prove to be the Chernobyl of climate crisis?

Richard Flanagan won the Man Booker Prize for “The Narrow Road to the Deep North” and is the author, most recently, of the novel “First Person.”