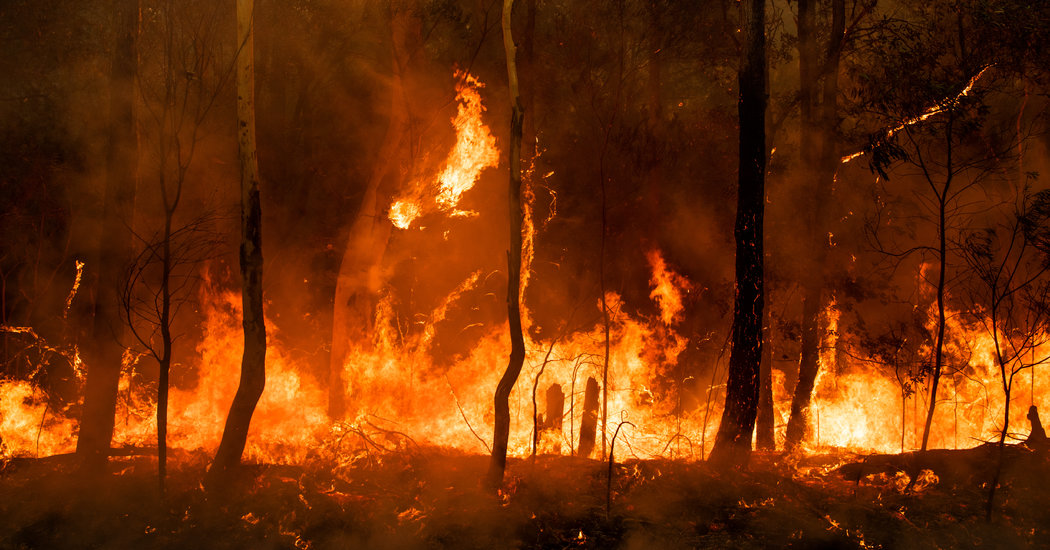 In a rational world, the burning of Australia would be a historical turning point. After all, it’s exactly the kind of catastrophe climate scientists long warned us to expect if we didn’t take action to limit greenhouse gas emissions. In fact, a 2008 report commissioned by the Australian government predicted that global warming would cause the nation’s fire seasons to begin earlier, end later, and be more intense — starting around 2020.

Furthermore, though it may seem callous to say it, this disaster is unusually photogenic. You don’t need to pore over charts and statistical tables; this is a horror story told by walls of fire and terrified refugees huddled on beaches.

So this should be the moment when governments finally began urgent efforts to stave off climate catastrophe.

But the world isn’t rational. In fact, Australia’s anti-environmentalist government seems utterly unmoved as the nightmares of environmentalists become reality. And the anti-environmentalist media, the Murdoch empire in particular, has gone all-out on disinformation, trying to place the blame on arsonists and “greenies” who won’t let fire services get rid of enough trees.

These political reactions are more terrifying than the fires themselves.

Climate optimists have always hoped for a broad consensus in favor of measures to save the planet. The trouble with getting action on climate, the story went, was that it was hard to get people’s attention: The issue was complex, while the damage was too gradual and too invisible. In addition, the big dangers lay too far in the future. But surely once enough people had been informed about the dangers, once the evidence for global warming became sufficiently overwhelming, climate action would cease to be a partisan issue.

The climate crisis, in other words, would eventually become the moral equivalent of war — an emergency transcending the usual political divides.

But if a nation in flames isn’t enough to produce a consensus for action — if it isn’t even enough to produce some moderation in the anti-environmentalist position — what will? The Australia experience suggests that climate denial will persist come hell or high water — that is, through devastating heat waves and catastrophic storm surges alike.

You might be tempted to dismiss Australia as a special case, but the same deepening partisan division has long been underway in the United States. As late as the 1990s, Democrats and Republicans were almost equally likely to say that the effects of global warming had already begun. Since then, however, partisan views have diverged, with Democrats increasingly likely to see climate change happening (as indeed it is), while Republicans increasingly see and hear no climate evil.

Does this divergence reflect changing party composition? After all, highly educated voters have been moving toward the Democrats, less-educated voters toward the Republicans. So is it a matter of how well informed each party’s base is?

But if climate denial and opposition to action are immovable even in the face of obvious catastrophe, what hope is there for avoiding the apocalypse? Let’s be honest with ourselves: Things are looking pretty grim. However, giving up is not an option. What’s the path forward?

The answer, pretty clearly, is that scientific persuasion is running into sharply diminishing returns. Very few of the people still denying the reality of climate change or at least opposing doing anything about it will be moved by further accumulation of evidence, or even by a proliferation of new disasters. Any action that does take place will have to do so in the face of intractable right-wing opposition.

This means, in turn, that climate action will have to offer immediate benefits to large numbers of voters, because policies that seem to require widespread sacrifice — such as policies that rely mainly on carbon taxes — would be viable only with the kind of political consensus we clearly aren’t going to get.

What might an effective political strategy look like? I’ve been rereading a 2014 speech by the eminent political scientist Robert Keohane, who suggested that one way to get past the political impasse on climate might be via “an emphasis on huge infrastructural projects that created jobs” — in other words, a Green New Deal. Such a strategy could give birth to a “large climate-industrial complex,” which would actually be a good thing in terms of political sustainability.

Can such a strategy succeed? I don’t know. But it looks like our only chance given the political reality in Australia, America, and elsewhere — namely, that powerful forces on the right are determined to keep us barreling down the road to hell.