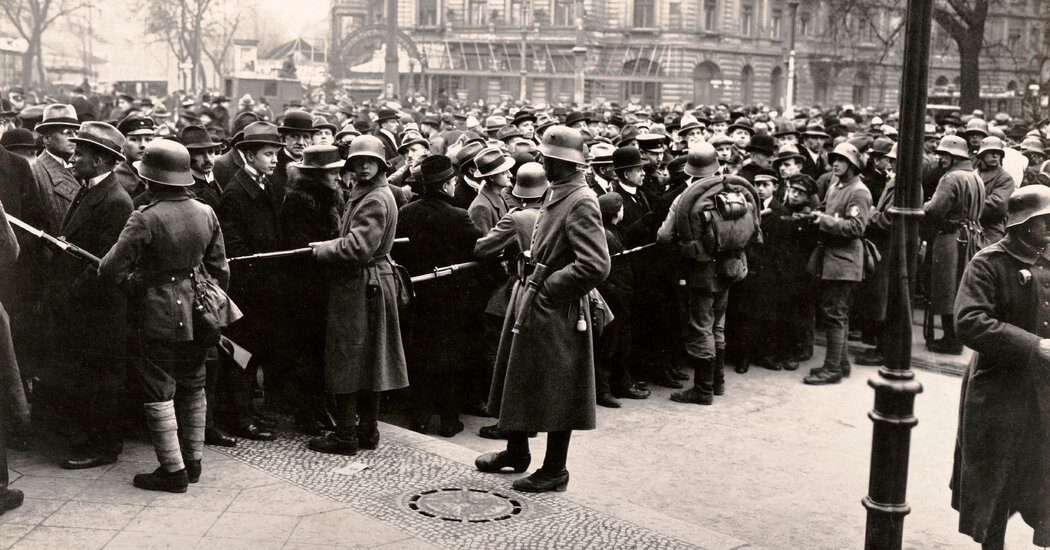 How watching a TV show about Weimar Germany can help us interpret our own era.

“I’ve said this before. And I’m telling you, I worry that I’m right. The right is going to pick a fascist within 10 to 20 years.”

That’s a quote from Jesse Kelly, a pugnacious right-wing talking head, on Tucker Carlson’s show last week. His prediction, as you might expect, is very different from the left-wing version of the same prophecy. The left worries that the right is going fascist because conservatism is so racist, anti-democratic and depraved. But Kelly thinks the right might “pick a fascist” as an understandable response to left-wing radicalism and the corruption of the liberal establishment. It’s the prediction as threat: It’s not that we want the G.O.P. to get fashy, but if it happens, it’ll be the progressives’ fault.

This sounds like a very Weimar sort of sentiment. So I’m going to use it as an excuse to recommend that everyone inclined to draw parallels between 21st-century America and Weimar Germany should catch up with the best dramatic show on television: the German-language, late-1920s-set serial “Babylon Berlin.”

The show is a detective story in the foreground, with the political drama looming behind. It starts before the Great Depression (the most recent season ends with the crash of 1929) and follows Gereon Rath, a police inspector new to the German capital, and his eventual collaborator Charlotte Ritter, a flapper who aspires to become a detective. Their police work takes them through the Berlin demimonde, thick with gangsters, journalists, prostitutes and avant-garde filmmakers; inevitably this world is entangled with a political scene inhabited by cross-pressured Social Democrats, right-wing nationalists allied with the military brass and Communists. The Nazis don’t appear until the end of the first season, and then only as the cat’s paw for the main bad guy, a ruthlessly ambitious nationalist. Nobody imagines them as a threat to actually take power — well, nobody except for the Nazis themselves.

“Babylon Berlin” has many virtues, including the will-they-or-won’t-they frisson conjured by its lead actors. But its major success is in evoking a feeling that might be described as almost-familiarity in its portrait of Germany before the fall.

That is, if you are inclined to see contemporary America, under Donald Trump or after him, as a nation entering its own Weimar period, there will be scenes from the Berlin tapestry that prompt a shock of recognition.

This includes the aspects of Weimar that inspire nostalgia on the left, the Babylon Brooklyn mix of socialist radicalism and sexual liberation. It includes the bully-boy factions in the streets, whose menace antifa and the Proud Boys imitate in our own era. It includes the way that extremes can radicalize one another as the center weakens, the agony of moderate figures trying to decide whether their official political opponents or their more extreme ideological allies are the bigger threat, and the mix of cynicism and naïveté with which the wrong choice is often made.

Above all it includes the depiction of Berlin itself, the show’s real main character, a self-contained world of deracination and atomization, sexual experimentation and depravity, utopian fantasy and reactionary zeal, old and new bigotries, media frenzies and political radicalization. What is the city, if not the late-1920s version of the internet?

But then alongside these familiarities there is the stronger shock of difference. The scale of poverty and degradation on display, even before the Great Depression hits, is a reminder that the world in which the Nazis rose was extraordinarily poorer than our own, with a fundamental fragility even for the middle class that neither the Great Recession nor the coronavirus have yet delivered to Americans. The violent legacy of World War I, its brutalization of an entire generation, is palpable in both the violence in Berlin’s streets and the literal shell shock afflicting multiple male characters: No recent American trauma can compare.

Equally unfamiliar is the scope of viable-seeming political possibilities for the characters to embrace. In the course of the show we meet Stalinists and Trotskyists and White Russians, nationalists and fascists and would-be restorers of the Kaiser, as well as the fractious defenders of the republic. Almost all of them, crucially, have real-world correlatives for their ambitions — still-extant monarchies, the Soviet Union, Mussolini’s Italy. If the tragedy of Weimar is that it went through a doorway that opened into hell, the drama of Weimar is that so many doors were open, so many different political futures seemed entirely possible — in a way that makes our own era’s radicalisms feel more fantastic, ungrounded or made for cable TV.

Then the final thing that’s striking about Weimar’s world compared to ours is the sweeping institutional and cultural strength of the nationalist right. Indeed if anything the show underplays this power: It portrays a right-wing German military eager for a coup and conservative industrialists eager to support it, but the potency of right-wing ideas in the intelligentsia and the German university hasn’t really been depicted; the lone student character so far is an idealistic Communist.

The overall vibe on the show, though, makes some kind of rightward shift in 1930s Germany seem all but inevitable. (Which only makes the role the non-Nazi right played in elevating Hitler seem more shameful.) But that is not at all the vibe of 2020s America, where conservatism feels much more decayed and self-marginalizing, with little of the right-wing infrastructure and ambition that the Nazis channeled, co-opted and corrupted.

Yes, conservatives have Fox News and talk radio, the Republican Party has its business-class support and Trump had Michael Flynn and the MyPillow C.E.O. and Jerry Falwell Jr. But our generals are mostly allergic to politics and the military’s most recent political intervention was a counterstrike against a critique from Tucker Carlson. Our corporations dislike socialism but their main strategy for keeping it at bay is to go all in on cultural-left politics. Our churches are fractured, scandal-ridden and declining. Our aristocracy — sorry, meritocracy — is divided between hand-wringing liberals and militant progressives. And our conservative party isn’t eager to tear our constitution up and start anew: Instead it’s hyper-constitutionalist, because its current share of power depends on some of the Constitution’s most antique instruments.

In this landscape I actually find myself in sympathy, in an odd sort of way, with liberals who might respond to Jesse Kelly’s invocation of some future fascist G.O.P. by saying actually, Donald Trump is already what American fascism looks like. Not because I think “fascist” is the proper term for Trumpism, but because in his presidency we already saw what happens when a weakened and marginalized right gets radicalized and claims the White House without a popular majority.

We got cruelty and demagogy and corruption — but also a pretty standard Republican agenda. We got flailing weakness in the face of opposition from almost every other power center. We got dramatic failures of governance, not the consolidation of power, when a historic crisis came along.

And when violence was instigated on this right-wing president’s behalf, it took a frightening but also futile form — one that very vaguely resembled the Reichstag Fire, except that the Jan. 6 riot ended with the organs of the security state turned against the extreme right, not mobilized on its behalf.

None of this is an experience I’d care to repeat. But it’s also not an experience that makes Kelly’s the right might go fascist warnings feel exactly like a warning from a German nationalist circa 1928.

Under Weimar’s conditions, the right’s radicalization threatened, and eventually delivered, the outright destruction of German liberalism and the German left. (And then much, much more destruction beyond that.)

But under contemporary American conditions, further right-wing radicalization seem more likely to be a suicide weapon — a way for a weakened movement to instigate a period of crisis, maybe, but one that would probably only hasten its marginalization and defeat.