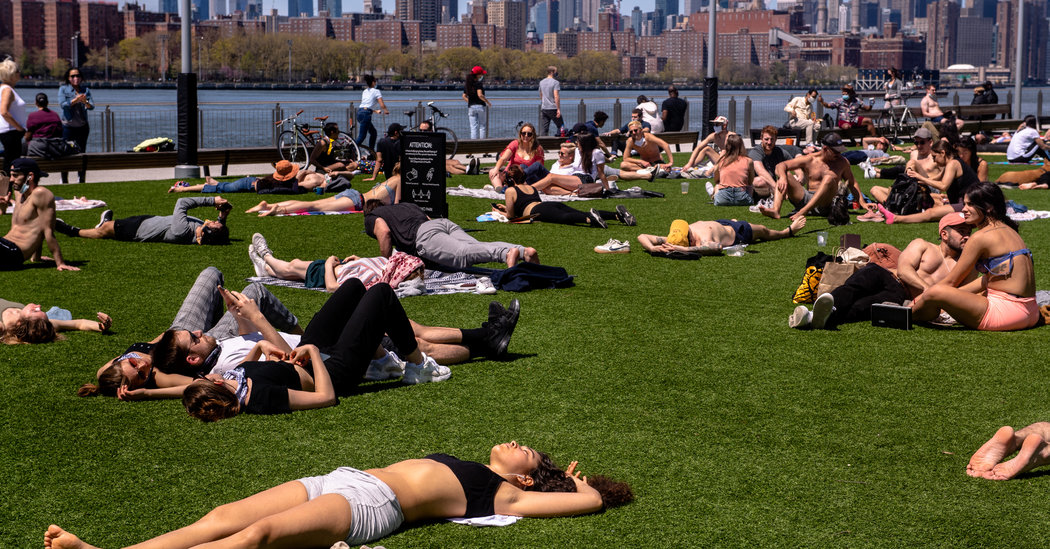 On the second day of May, New Yorkers were greeted with sunny skies and the warmest weekend so far this spring. People got up off their couch, put on their shoes, donned their face coverings, and left their cramped houses and apartments for the nearest park — desperate for fresh air and a little exercise.

After weeks spent almost entirely indoors to avoid the coronavirus, they seemed to be drawn outside as much by the balmy weather as by their hopes that New York City was slowly, cautiously, starting to emerge from the crisis that has kept it locked down since mid-March.

But in parks across the city, the police and other law enforcement officers were on hand, handing out masks, breaking up soccer games and reminding people to spread out.

At times, the rules were difficult to pin down. Picnickers were let alone in some parks, but told to move along in others.

Across the Hudson River, New Jersey residents began returning to the state and county parks that reopened Saturday after having been closed for nearly a month.

But the announcement from Gov. Philip D. Murphy of New Jersey on Friday that parks and golf courses would reopen came with a warning: Restrictions could be reimposed if people did not practice social distancing or wear face coverings.

In New York City, the epicenter of the crisis, parks have remained open, with the exception of playgrounds. Still, some officials this week had feared that the sunny weekend — temperatures in the 70s arrived after a cooler, rainy week — would lead to crowds in parks, risking a reversal of the hard-fought efforts to quell the outbreak.

“The nice weather is very much a threat to us,” Mayor Bill de Blasio said during a radio interview on Friday.

With the number of new coronavirus cases in New York State continuing to decline from its peak in early April, talk has slowly turned to ways of easing the lockdown. Still, city health officials are continuing to urge New Yorkers to keep their outings to a minimum.

The mayor, who on Friday had warned against sports and other group activities over the weekend, said on a Saturday afternoon CNN appearance that most New Yorkers had been abiding by the guidelines.

“People have heard that we need them to stay home, overwhelmingly they have,” Mr. de Blasio said. “Even with good weather, they’ve gone out for a while and they came back home.”

New York State is still under an executive order from Gov. Andrew M. Cuomo restricting any “nonessential gatherings of individuals of any size for any reason” until at least May 15.

At Flushing Meadows-Corona Park in Queens, Cristian Guzman, 23, and his friends were about to start playing soccer when two deputies with the New York City Sheriff’s Office pulled up.

The deputies explained they were gathered too closely. Mr. Guzman and his teammates gave up on the idea of playing. In Spanish, he said it made him sad. It would have been his first game in six weeks, he said, but he had to respect the rules.

Mr. Guzman worked at a restaurant that has closed. Around him in the park, other people sunbathed, walked dogs, flew kites, rode bikes and skateboards, and played table tennis and roller hockey.

The deputies returned to their squad car and drove on, stopping mainly to hand out masks to park-goers.

In some places, the authorities seemed most concerned with whether people were wearing face coverings. At Domino Park in Williamsburg, a masked park employee walked amid sunbathers and picnickers, pointing to his face and telling people to put their masks on.

Eric Freeman, 27, a mixed martial arts fighter who lives in Greenpoint, Brooklyn, pulled the mask around his chin up over his mouth when he was confronted, only to pull it back down when the park employee was gone.

“The mask is really annoying,” he said, lifting a paper cup filled with what appeared to be pink lemonade. “How do you drink with a mask on?”

But in Inwood Hill Park in Upper Manhattan, picnickers and families playing in a grassy field around noon were shooed along.

“Basically, the officer told us we couldn’t be stationary and we needed to be moving,” Chris Carfizzi said as he, his wife and their 3-year-old headed toward a paved path. They had been blowing bubbles and playing with a ball.

“We’re lucky we have the scooter,” Mr. Carfizzi said.

Public health experts say parks are generally regarded as a relatively low-risk environment for transmission of a respiratory illness, like the coronavirus.

“There’s no reason a family can’t picnic in the park,” said Jennifer Nuzzo, an associate professor in the Department of Epidemiology at the Johns Hopkins Bloomberg School of Public Health.

But she noted that it was not always possible to determine at a glance whether a group of picnickers were from the same household, or if it represented a social gathering. “It’s hard for the people who enforce this to know whether they’re dealing with a family or not,” she said, explaining why enforcement might default to an all-or-nothing approach.

“It’s easier from their vantage to do a simple ‘don’t’ or ‘do,’” said Professor Nuzzo, who used to work as an epidemiologist for New York City.

To give New Yorkers more outdoor spaces, the city on Saturday closed off seven miles of streets inside and near city parks to vehicle traffic — the first installment of a planned 40 miles of closings.

The street closures were originally scheduled for Monday, but Mr. de Blasio said on Twitter late Friday that city agencies and the Police Department would start the program early.

Most of the city’s storefronts remain shuttered, with nonessential businesses required to stay closed in New York, and public transit has become something to avoid if possible.

But in some ways, Saturday served up a preview of what the city can expect as New Yorkers eye a return to public spaces, even as precautions remain in place to further slow the spread of the virus.

“I believe with the warm weather people will come outside, and that’s great,” Mr. Cuomo said at a news briefing on Saturday in Queens. “Go for a walk, but just respect the social distance and wear a mask.”

In Central Park, Joe Corcoran, 35, was out for a run Saturday morning and acknowledged that the park seemed crammed — small clusters of people were spread out in Sheep Meadow’s 15 acres of grass.

“I think people are trying to do their best to stay physically healthy, but also respect people’s boundaries,” said Mr. Corcoran, who lives on the Upper East Side.

In New Jersey, which after New York has the second-highest number of coronavirus cases in the country, people were also eager to get outside. Just before 6 a.m., Ralph Vazquez, 49, arrived at the southern entrance to Liberty State Park in Jersey City. He had his 23½-foot Wellcraft boat in tow, with two friends seated inside the boat.

Mr. Vazquez’s excitement grew as he waited to enter the lot for the boat launch. “Let me pass!” he said. “Come on! I’m ecstatic to be back!”