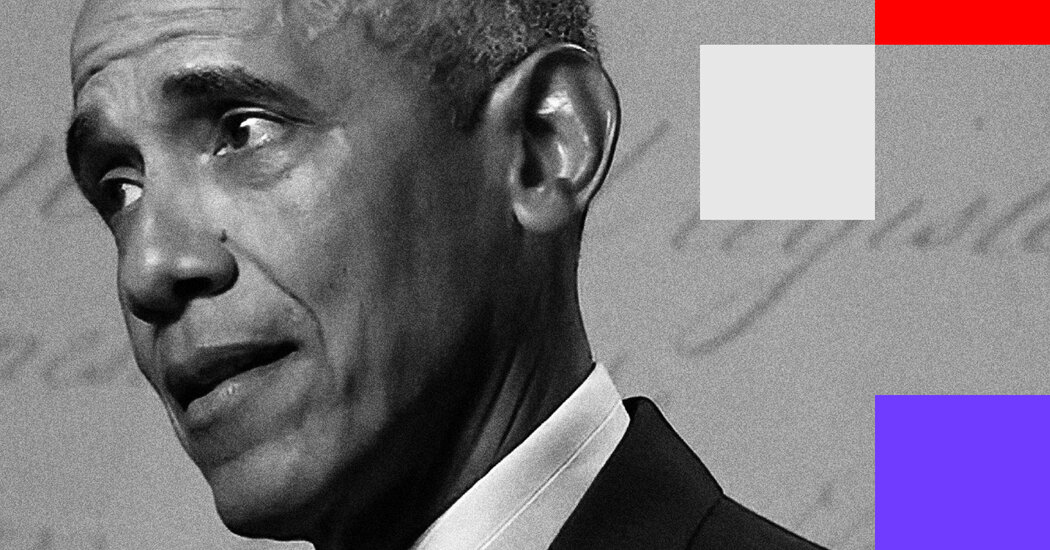 On Wednesday, Aug. 19, 2020, standing in front of an exhibition about the Constitution in Philadelphia, Barack Obama fully became an American Jeremiah.

Unlike that Hebrew prophet, Mr. Obama did not shatter the earth, nor predict the destruction of all our temples, nor see our Jerusalem quite yet in its deserved ruin. He did not tell us that collectively our “clothing is stained with the blood of the innocent and the poor,” as Jeremiah did. But he came close, even as he delivered a moving reassertion of American “ideals” and “creeds.”

Such is the purpose of the tradition of the “jeremiad,” in substance and style a rhetorical method born of Puritan sermons in the 17th and 18th centuries, and perfected by America’s greatest writers and some of its politicians in the 19th century.

In sermons, patriotic political speeches, abolitionist editorials or slave narratives, the jeremiad has always called the flock — a congregation or the nation — back from its declension from the faith, from its waning zeal to a renewed activist belief in the covenant.

The rhetorical device is suffused with mixtures of wrath, mystery, pathos, history, justice and optimism. Because America in its aspiration, if not its practice, is an idea, a set of creeds, asserted and violated and then always reasserted, the jeremiad became, as the most prominent scholar of this topic, Sacvan Bercovitch, argued, a “ritual plotline” in our national narrative.

We are both fortunate and burdened to be a covenanted people; we thankfully separated church and state, but the civil and sacred have always been codependent.

Although we are often reminded that many theories of American exceptionalism do not hold up to scrutiny, the jeremiad provides a ritual of return to the hope invested in the Declaration of Independence and the 14th and 19th Amendments, the G.I. Bill, the Voting Rights Act of 1965, the Clean Air Act, the Americans With Disabilities Act. As Mr. Bercovitch wrote, “The remedy for American abuses was the American promise, and the failure of that promise meant the failure of history itself.”

Such was Mr. Obama’s warning delivered at the Democratic convention. Mr. Obama has always been at heart a healer, a reconciler eager to find common ground with people who hated him for ideological, political and racial reasons. It is a primary reason for his political success and status today as the most admired political figure in our culture.

Sometimes his opponents despise his talent for reminding them that they ought to be better. But Mr. Obama seems to have finally given up on saving Republicans from their moral rot. Indeed, although he has always been a practicing Democrat, this week he truly became a Democrat.

He put aside the language of “there is no blue America or red America, only the United States of America.” He named essential elements of democracy, including the right to vote, a free press, a military with civilian leadership, and “fidelity to facts and science and logic and not making stuff up.”

Such principles, Mr. Obama said, should not be partisan, but now they are. President Trump and those who enable him “have shown that they do not believe in these things.” Therefore, they must be defeated and driven out.

It is almost as if a despairing Barack Obama during the Trump years has decided that if this be partisanship, so be it. Politics is war by other means. And winning this time means the survival of the nation itself.

The former president told us that “our democracy” — the American experiment — is on the line in this election, that the Trump presidency has so soiled and corrupted the promise, sent it to the brink of self-destruction, that we have only 70-plus days to save it. Mr. Obama knows that the jeremiad is not a mere lamentation, but a cry for hope. He delivered both.

And he spoke of “our democracy” struggling against “them.”

“Do not let them take away your power,” he pleaded particularly to young voters. Mr. Trump and his minions, he said, “are counting on your cynicism.”

Here was the altar call of the classic jeremiad — come back to the faith, even if you are so young that you were not aware you ever had one. Learn from the dark past and those who survived it — the reviled immigrants, religious groups and especially African-Americans, who all had reasons to quit on the promise but never did.

The ultimate target of Mr. Obama’s speech was young voters who do not turn out in large numbers. They are, he said, the “missing ingredient.” He insisted that our “system of self-government can be harnessed” to help them follow through on their conviction that everyone has equal worth.

In this speech Mr. Obama did not break into his stunning smile, except when talking about his “brother,” Joe Biden. He almost smiled when he said despite its flaws, the original Constitution had “embedded” in it a “North Star,” possibly a reference to Frederick Douglass’s newspaper by that title and to Douglass’s antislavery interpretation of the founding document.

No one mastered the jeremiad in the middle of the 19th century quite like Douglass in the crises leading to the Civil War. In 1859, Douglass turned a lament into a wail of hope about President James Buchanan’s disastrous handling of the debate over slavery expansion: “Go on, sir; let the nation go on sir. The end is at hand. The haughty Assyrians will yet be brought low — the ire of offended justice will yet flash upon your soul, and burn up your heart strings with unquenchable fire.”

Warnings of impending doom went hand in hand with attacks on national hypocrisy and calls for action and resistance. During the secession crisis in the spring of 1861, Douglass declared, “We have sown the wind only to reap the whirlwind,” because “the Republic has put one end of the chain around the ankle of the bondman, and the other end about its own neck.”

In his speech, Mr. Obama was not as apocalyptic, in tone or metaphor, as Douglass. But he was a somber, deeply worried man, not out to retrieve his presidential legacy from a narcissistic reality-show host unworthy of the office, but a citizen orator, looking us in the eye and telling us to wake up, rise up, read the creeds and do everything possible to save the historical demands of equality before the law and at the ballot box before it is too late and the American project is sent into a long Babylonian Captivity, perhaps to be reinvented by some other people in a distant century.

Mr. Obama’s former campaign manager, David Plouffe, described the speech on MSNBC, admiringly, as “alarming.” It was alarming, because the former president, a bit out of character, not only named the enemy, but summoned the entire national family to a moral equivalent of war.

David W. Blight is a professor of history at Yale and the author of “Frederick Douglass: Prophet of Freedom.”