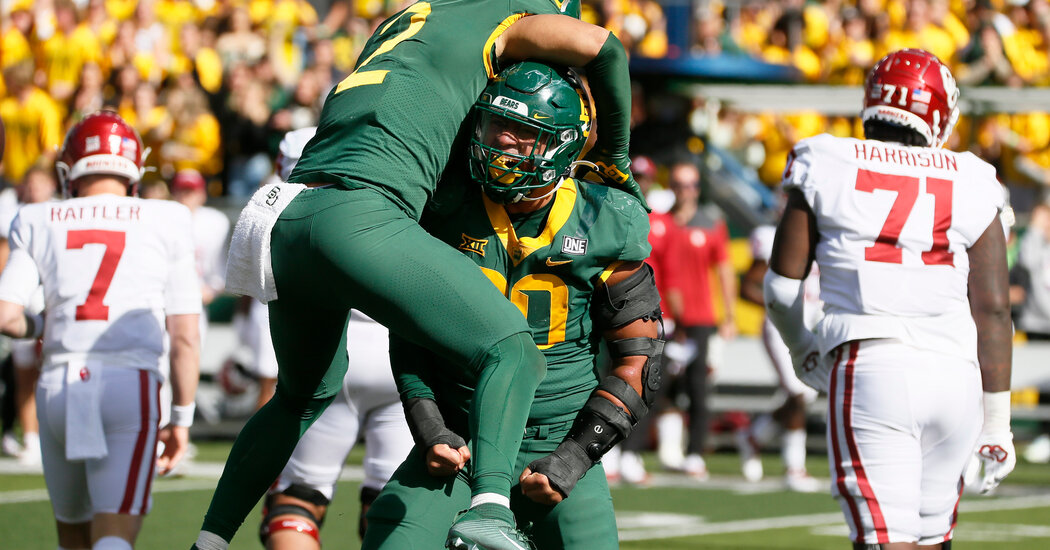 The Sooners faced a 7-2 Baylor team that they’d beaten seven consecutive times. But instead of capturing a needed win, Oklahoma took a 27-14 loss.

It is rare that a Power 5 team’s undefeated record works against it.

The 9-0 Georgia Bulldogs are the top team in college football, and, barring an unlikely loss, are nearly assured to make a playoff appearance. Last season, Nick Saban’s Alabama team held that distinction. The two years prior, it was Louisiana State in 2019 and Clemson in 2018.

This year was Oklahoma’s turn. The Sooners entered the season with an offense that was expected to be potent, led by a quarterback in Spencer Rattler who drew preseason Heisman Trophy hype.

“There just hasn’t been a signature win yet,” Gary Barta, the chair of the selection committee, told reporters this week.

The No. 8 Sooners faced a 7-2 Baylor team that they’d beaten seven consecutive times. But instead of capturing a needed win, the Sooners lost, and they underperformed badly in the process.

In a possible preview of the Big 12 championship game, Baylor handed Oklahoma a 27-14 loss that may have punctured the Sooners’ College Football Playoff hopes.

Baylor did so by quieting Oklahoma’s offense, which entered the game averaging nearly 500 yards a game and over seven yards per play, and by depending on the rushing of junior quarterback Gerry Bohanon, who finished with 107 yards on the ground.

“All this season I haven’t really been running the ball because the pocket has been good,” Bohanon said on the Fox Sports broadcast after the game. “But I told my coach this week: ‘I have 100 yards rushing in me this week. I’m coming in, and I want the energy to start with me.’ Coach made an emphasis about playing violent, and I wanted to make sure everybody felt that I was going to play violent.”

Bohanon was responsible for each of Baylor’s three touchdowns, tossing one and rushing for two.

Caleb Williams, the Sooners’ athletic true freshman quarterback who replaced Rattler in October, barely resembled the same player who had thrown for over 800 yards in his first three starts. His impressive plays were overshadowed by poor decisions and inaccurate passes. He threw two interceptions.

And after a run that gained 19 yards, Williams’s hand was stepped on as he rolled out of bounds late in the first half. His next possession was another interception in which he appeared to be trying to throw the ball away. Williams was replaced by Rattler late in the third quarter after “We want Spencer” chants emerged from the Oklahoma fans who had traveled to McLane Stadium in Waco, Texas.

Rattler began the season as Oklahoma’s starter before Williams replaced him in a dramatic win against Texas last month. The redshirt sophomore’s first possession, which came with less than two minutes left in the third quarter, yielded only a punt. And he did little to jump-start an Oklahoma offense that was held to its lowest point total of the season.

Baylor’s defense, coming off possibly its worst performance of the season in last week’s loss to Texas Christian (the Bears allowed over 500 yards), tallied five sacks and nine tackles for losses as the team contained both Rattler and Williams, giving neither quarterback many opportunities to push the ball down the field.

Oklahoma’s only touchdowns came in the second quarter and in the fourth, after the game’s fate seemed sealed.

The first score came after a scoreless first quarter in which Baylor failed to convert a fourth-down conversion inside the 10-yard line and both teams missed field goal attempts. Oklahoma’s defense intercepted Bohanon to start the second quarter, and Williams ran it in for a 2-yard score on the Sooners’ next possession.

Seventeen unanswered Baylor points followed as the Bears bullied the Sooners at the line of scrimmage, holding Oklahoma to just 260 total yards as Bohanon and the Baylor offense outgained the Sooners on the ground, 296-78.

As time wound down, the rumbles inside McLane Stadium turned to roars. When the game ended, Baylor players skipped across the field as fans stormed around them.

Oklahoma Coach Lincoln Riley could be seen yelling at officials on the Sooners’ sideline, appearing upset that Baylor wasn’t assessed a penalty after fans rushed the field with one second remaining on the game clock. But it didn’t matter much.

If there was little that an undefeated Sooners team could do to get into the playoffs before, those aspirations evaporated as their crimson and cream jerseys faded into the visitors locker room.