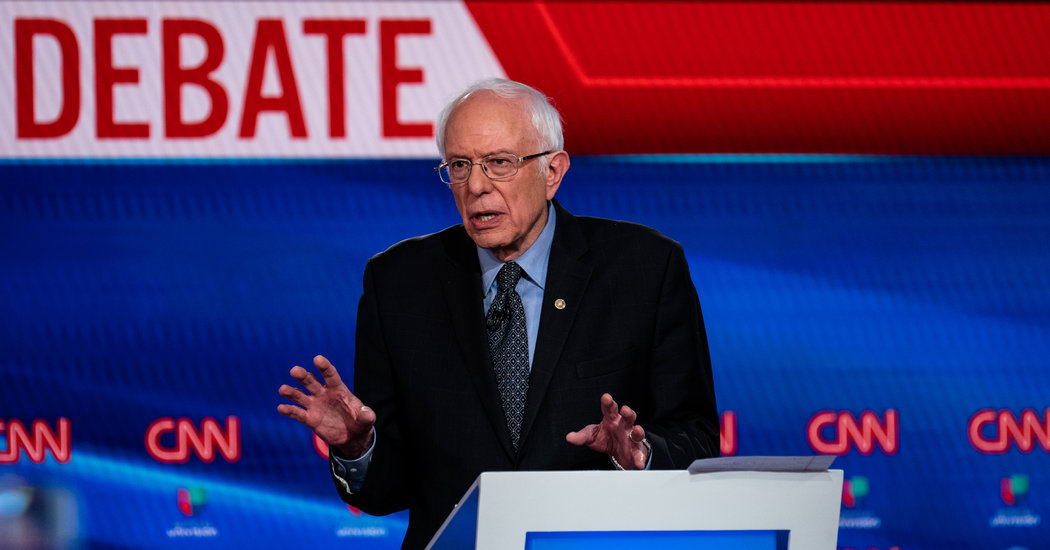 Senator Bernie Sanders plans to participate in the Democratic presidential debate in April if one is held, his campaign said on Tuesday, the strongest indication yet that he plans to continue competing against Joseph R. Biden Jr. in the 2020 primary for the foreseeable future.

The Democratic National Committee has said previously that there would be a debate in April, but one has not been scheduled. The committee has not announced a media partner or a site host — critical elements that are typically agreed upon at least a month in advance. The coronavirus crisis has already upended most facets of the Democratic primary, and there is no guarantee that the debate will take place.

Still, the fact that the Sanders campaign is signaling, for now, that he would be on a debate stage in April is a strikingly public sign of the Vermont senator’s determination to wield political influence and challenge Mr. Biden for primacy despite the former vice president’s nearly insurmountable delegate lead.

“Senator Sanders is still running for president,” said Mike Casca, a top campaign official. “If there is a debate in April, he plans to be there.”

Mr. Sanders has been holding regular live-streamed events to discuss the coronavirus response, including one on Tuesday night with Representative Pramila Jayapal of Washington and several health experts.

Before the coronavirus outbreak effectively put the primary race on hold — most upcoming primaries have been moved to later dates and neither Mr. Sanders nor Mr. Biden is holding any in-person campaign events — Mr. Sanders had soundly lost a string of primary races beginning with South Carolina and continuing through last Tuesday, when he lost contests in Arizona, Florida and Illinois.

Mr. Biden’s decisive victories, and his ability to attract so many demographic groups, have left Mr. Sanders with no realistic path to the nomination. After Mr. Sanders’s losses last week, his campaign manager said the Vermont senator would “assess his campaign,” and Mr. Sanders has shifted his focus since then to the virus. He has not made any announcements about his campaign’s future, and snapped last week at a reporter who asked about his plans. During an interview on MSNBC on Monday night, he said his campaign was “kind of moving day by day.”

The Democratic National Committee has not set a media partner, a venue or a date for the party’s final planned debate, nor has it released qualification criteria to participate.

Xochitl Hinojosa, a D.N.C. spokeswoman, declined to say whether a debate would still take place in April as planned or move later in the calendar to follow primary contests from several states that have switched from April to June. The Biden campaign declined to comment.

Mr. Sanders and Mr. Biden met in their first one-on-one debate just over a week ago, a forum that was moved from Arizona to Washington, D.C., because of travel concerns related to the coronavirus, and held in a CNN studio with no live audience.

Nine states and the District of Columbia now plan to hold primaries on June 2, making it the day with the second-largest delegate haul on Democrats’ presidential primary calendar, after Super Tuesday, when California and Texas voted.

Mr. Biden cannot officially clinch the presidential nomination before June 2, even if he were to win all of the delegates from all of the states and territories voting before then.

And some of the states with contests scheduled in April and May are contemplating moving back on the calendar. Elections officials in New York and Pennsylvania, with April 28 contests, have said they will seek to delay their primaries.