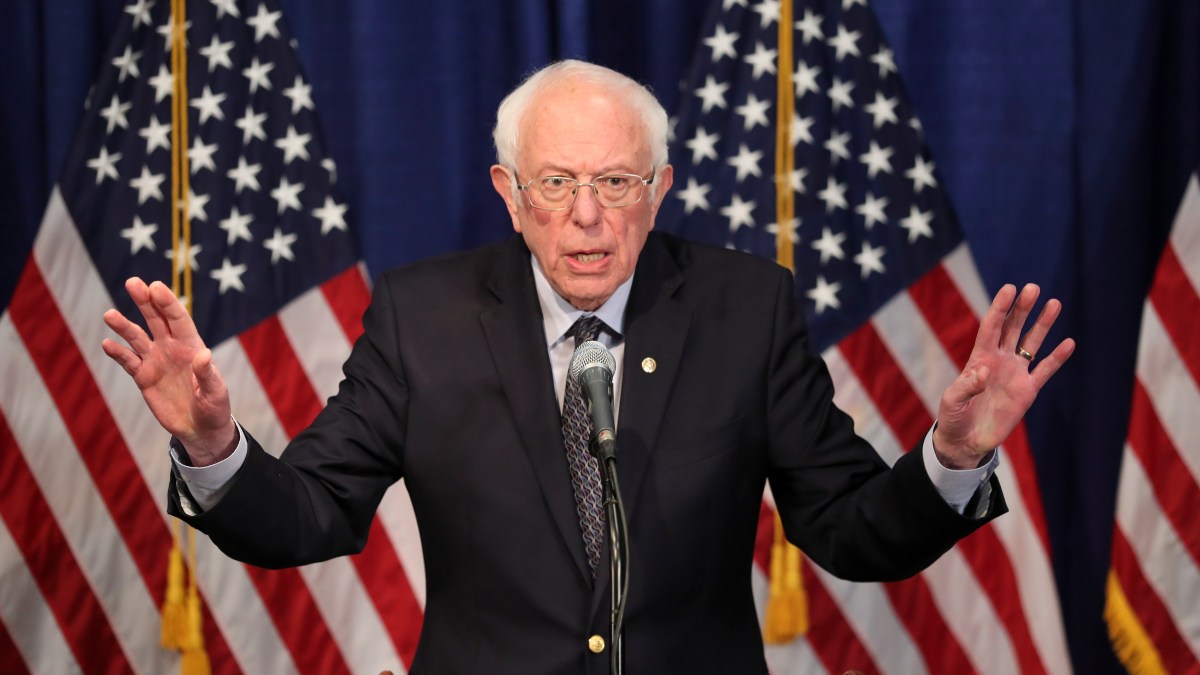 Bernie Sanders is vowing to press ahead with his presidential campaign at least long enough to debate Joe Biden this weekend, even while acknowledging his deficit in the Democratic race may be insurmountable.

The Vermont senator on Wednesday offered no further details on what his campaign may look like before or after he and Biden — the last two major candidates vying for the Democratic presidential nomination — spar Sunday night on stage in Arizona. The only thing on Sanders’ public schedule was taping an appearance on Wednesday’s “Tonight Show Starring Jimmy Fallon.”

And that will continue to raise questions — as unlikely as it may seem less than two weeks after losing his once commanding front-runner status — about how long Sanders will persist against increasingly daunting odds, especially as the pressure within his own party increases exponentially.

Sanders addressed reporters in Burlington after offering no public statements Tuesday night, when he suffered a devastating defeat in Michigan and losses in Missouri, Idaho and Mississippi. Sanders noted that he won North Dakota and that the continuing count in Washington state remained close — but admitted he was trailing badly in the race to secure enough delegates to secure the nomination before the Democratic National Convention in Milwaukee.

What exactly are delegates, and how do they determine who becomes the Democratic nominee? We emptied our toy box to explain how primaries and caucuses help the Democratic Party select the next presidential nominee.

“While our campaign has won the ideological debate, we are losing the debate over electability,” Sanders said, meaning Democrats think Biden has a better chance of beating President Donald Trump in the fall. “That is what millions of Democrats and independents today believe.”

He was quick to add that he thinks he’s the stronger choice, and that he could show that during Sunday’s debate. Sanders promised to press Biden for answers about millions of Americans who don’t have health insurance, a criminal justice system he said unfairly targets and punishes minorities and raising the federal minimum wage.

After that, though, Democrats’ desperate desire to defeat Trump could affect his calculus. Should Sanders get out soon, he could save Democrats months of a messy and expensive primary fight. But an early departure would also deprive the party’s most passionate supporters, including many young people, of the one man who embodies the dramatic change they crave.

Democrats turned out in big numbers on Super Tuesday and during the March 10 contests, exceeding 2016 levels in most states and setting new records in Virginia and Michigan. Click or tap for the voter numbers

Sanders also noted that he was winning a greater percentage of young voters while Biden continues to run up the score with older ones.

“Today, I say to the Democratic establishment, in order to win in the future, you need to win the voters who represent the future of our country,” Sanders said. “And you must speak to the issues of concern to them. You cannot simply be satisfied by winning the votes of people who are older.”

Sanders has indeed been widely favored over Biden by voters under 30, but he has not delivered on his strategy of getting them to the polls in great numbers, according to AP VoteCast surveys of voters in Tuesday’s Democratic primaries. Also problematic for him: Sanders showed no overwhelming strength with voters age 30 to 44, typically a larger share of the vote than the very young, in Michigan and Missouri.

That Sanders was vowing to soldier on was hardly a surprise. The 78-year-old democratic socialist is nothing if not willing to take on the political establishment against all odds — and Sanders’ closest allies are happy to see him stay in the race, even if the rest of the party is not.

“The process of unity isn’t just this pie-in-the-sky, vague, butterflies-in-your-tummy type of feeling,” New York Rep. Alexandria Ocasio-Cortez, one of Sanders’ highest profile supporters, said Wednesday in an interview on Capitol Hill. “It requires real coalition building, and coalition building requires plans and commitments to electorates to figure out how we unify. And so I think that this is a good opportunity for us to come together.”

RoseAnn DeMoro, former executive director of National Nurses United and a Sanders confidant, said Sanders “has a mandate not to abandon the movement.”

“Heroes aren’t made, they’re cornered,” DeMoro said. “He is cornered.”

Four years ago, under similar pressure in a primary match-up against Hillary Clinton, Sanders fought on for months before ultimately backing Clinton in July. Sanders has repeatedly insisted that he and Biden are friends and that he will back the former vice president if he’s the party’s nominee — he just may not be ready to yet follow through on that promise.

Former Vice President Joe Biden was the projected winner of the Democratic primary in Mississippi on Tuesday. Biden and Bernie Sanders were competing in six states Tuesday.

Still, Sanders didn’t say Wednesday where he plans to travel next. His campaign is opening five offices in Arizona on Wednesday night, but using top supporters rather than the candidate himself.

Adding to the uncertainty is the spread of coronavirus, which forced both Sanders and Biden to cancel campaign events Tuesday night in Cleveland and prompted Sanders’ team to say it would evaluate future events on a case-by-case basis.

Beyond the debate, the primary calendar could get even bleaker for Sanders. Next week, four more states vote and while he is hoping his support with Hispanic voters can lift him in Arizona, Sanders may struggle in two of the most important ones, Illinois and Florida — where some voters could be alienated by his recent comments defending Fidel Castro’s communist government in Cuba.

“Trump must be defeated and I will do everything in my power to make sure that happens,” Sanders said. “On Sunday night in the first one-on-one debate of this campaign, the American people will have the opportunity to see which candidate is best positioned to accomplish that.”